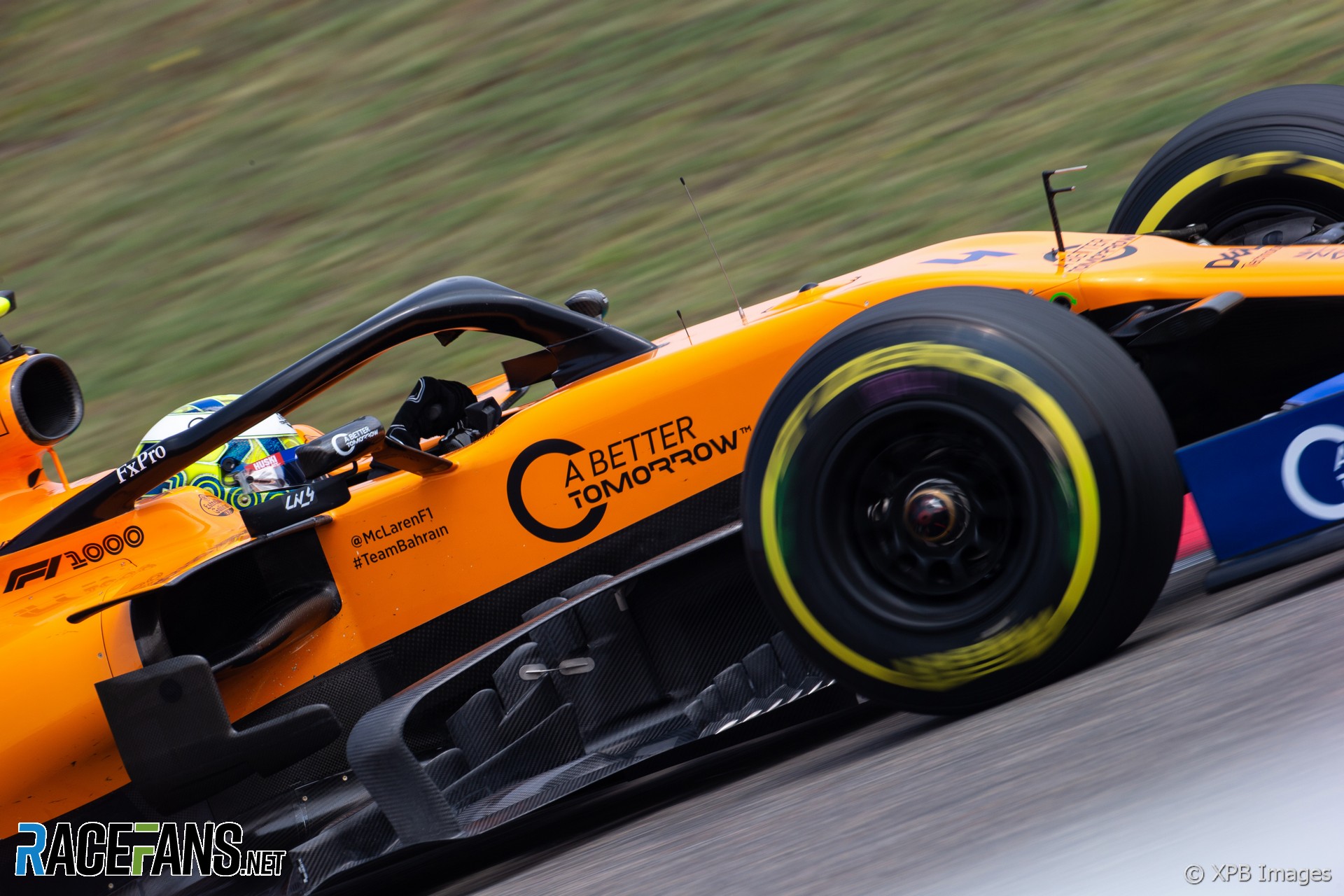 In the round-up: Lando Norris says judging how much tyre-saving to do is harder in practice than it is in races.

I think the hard thing in the practice and pre-season testing and everything is knowing how much to push and not to push. Especially for my first time doing a race sim in Barcelona, knowing how hard to push with a full tank of fuel, tyres that drop off a lot both in wear but also thermally, it’s always hard to judge. Sometimes you have loads of tyre deg and you think ‘oh no, this is going to be terrible’.

When you’re in a race you obviously gauge yourself much more of others drivers around and it’s easier to know what they’re doing and what you have to do to make changes and save the tyres more, save they tyres less. So it is very different.

As a whole experience the pressure is on a lot more. It’s what counts on the Sunday, rather than pre-season testing [where] you can do a lock-up, a little mistake, it’s like ‘that’s nothing’. But if you do it on Sunday you lose a place or you have to box for a flat-spot or something like that, then it’s a much bigger problem. So altogether it’s a lot more pressure, you have to think about a lot more things when it comes to the race itself rather than in pre-season when it’s a bit more relaxed.

Always fun to see recent single-seaters put to use in hillclimbs. Here's a Dallara F312:https://t.co/HKXDrC99mI

It can't come soon enough. Increase ERS and diminish ICE power for the next five years.
Then go electric final drive. What powers the electric motor is up to the teams (battery, wireless inductive charging, battery swaps, ICE generator)

Two big winners in Angerville: Taponen in Junior and Patterson in OK (FIA)

"With the 2nd fastest time of Qualifying Practice, the Sauber Karting Team Driver Dexter Patterson (GBR - KR / Iame / LeCont) was then extremely dominant. He did not take any risks by finishing fourth in his last heat, still knowing he was the leader in the OK category. He started the Final in pole position and kept his lead over the 26 laps."

WTCR electrification will take 'a few years' at least (Autosport)

"It's quite a tricky exercise to electrify a championship - we see (in) Formula E, the level of expertise, and how much the habits we have (must) be changed - safety level, security everywhere and then the way to provide the electricity, to manage the cars, single suppliers and everything because it would be crazy cost of development."

Instead of making either combustion or electric engines mandatory, should F1 try to find parity between different power units?

I have an idea… maybe a dream. Why not open the regulations and that the teams could decide which type of power unit they want?.

Like formerly when you can try between aspirated 3.0-litre engines and 1.5-litre turbos. That formula was very advantageous for the aspirated engines in the beginning, but when some teams set out to investigate and develop the turbos, they managed to surpass the performance of the aspirates.

I think to try to replicate that formula, making a regulation that is advantageous for the petrol engines but leaving a space for electric innovation is a (expensive) good idea.
Dani B Molina (@Esmiz)