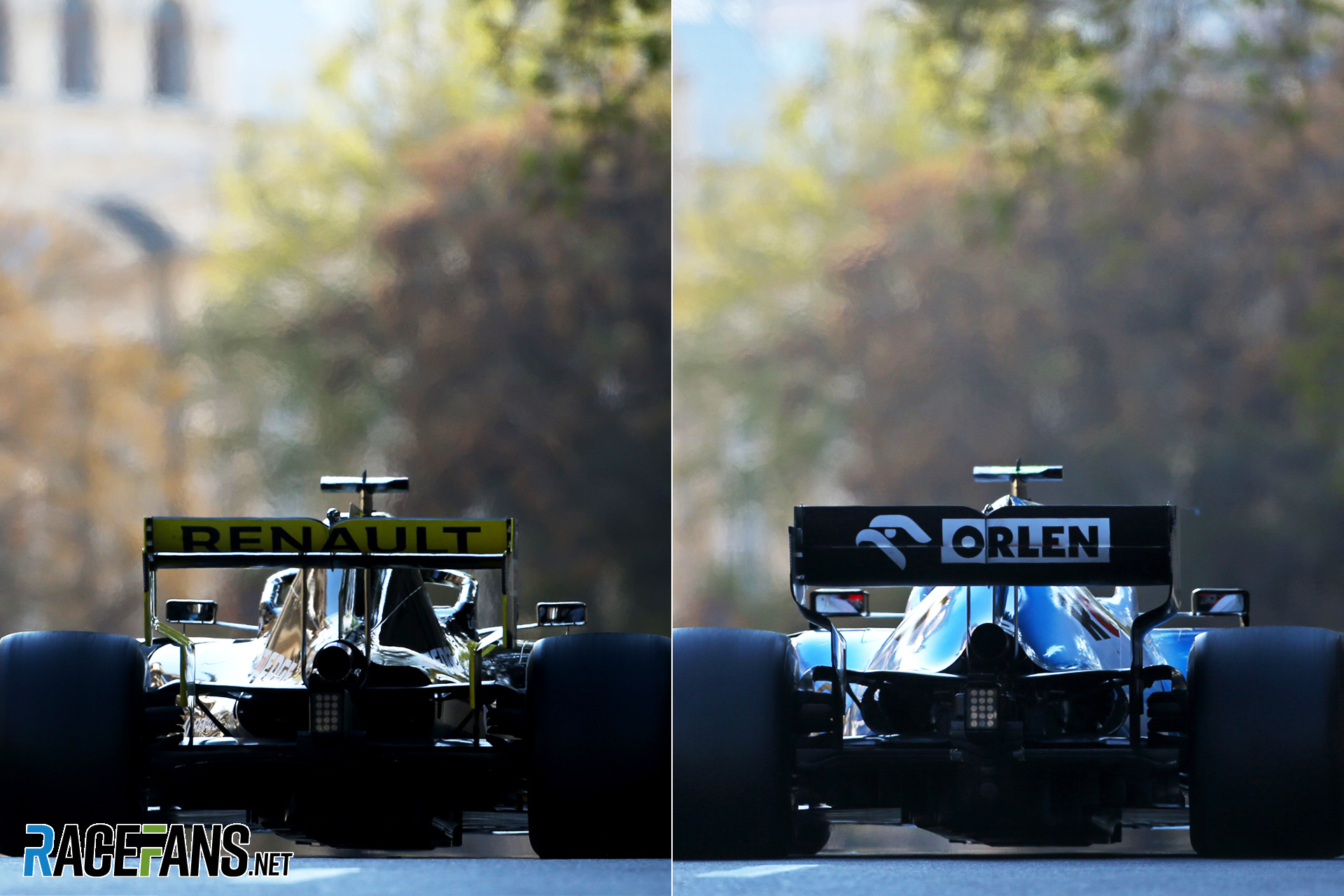 Baku is far from a typical street circuit. While its has slow and tight sections, the teams’ approach to set-up is dominated by the need to be fast on its long straights.

This isn’t a track which demands maximum downforce at any cost like at Monaco, but low drag to boost top speed, even if it slows the car through the tight sections.

Every team has a track specific rear wing design for this weekend’s Azerbaijan Grand Prix, to cut drag and increase top speed. All these wings are new, some have already been tested and can be grouped into three different approaches.

The rear wing on an F1 car is perhaps the most tightly regulated aerodynamic device. There as limits on the number of aerofoil profiles, geometry and flexibility. The 2019 rear wing has been enlarged since last year.

The section the regulations term the rear wing, the two-element aerofoil, is now 101cm wide. Added to that width there is also a 5cm allowance for each rear wing endplate, so this free area is used to shape the final section of wing tip. These two profiles can then be 35cm front to rear and 22cm deep.

This create quite a large and powerful rear wing, it creates downforce from its width, known as its span. Then the potential angle the wing can be angled at from leading edge to trailing edge, this is the angle of attack. Then the measurement between the front and rear edges is termed the chord. Changing any of these parameters from the maximum allowed with the geometrical box the rules create, to a smaller dimension will alter the wing’s downforce from maximum to lower levels.

Downforce adds grip for cornering, which improves lap times, but downforce comes with a price which is drag. Drag slows the car on the straights and it is largely the rear wing set up that defines a car’s top speed at the end of the straight. Engine power is also a variable in a car’s top speed, but the team have little influence track-by-track to alter this. For any given track the teams have to compromise corner speed for straight-line speed to get the best lap time.

Aerodynamic drag comes in many forms. For narrow aspect ratio F1 rear wings this it comes largely from induced drag created by wing tip vortices, which are spiralling airflows created where the high pressure above the wing tip roll over into the lower pressure areas beside and below the wing tip. These are the vapour trails seen on damps days curling from the wing tips.

This induced drag slows the car and any means to reduce it will aid top speed, but there are different ways to achieve this as seen by the variety of wings seen in Baku. These should be termed low-drag wings, not low-downforce, as the primary gain is with the reduction in drag. We can group these designs into three categories, each has its own merits and there is no ‘best’ solution, merely the one that fits in with the teams aero and set up philosophy

The most obvious way to reduce drag from the wing is to make it smaller, having the wing shallower in side profile. This reduces the chord and angle of attack; the wing is less powerful and this in turn reduces drag.

Red Bull are the arch-exponents of this solution. Often their rear wing is flattened to just a shallow ‘tea-tray’ shape. Moreover, Red Bull will shorten the chord of the wing to further take load and drag from it. Having a shallower wing does create some issues when it comes to packaging the DRS pod into a smaller area. So along with its mounting pylon, the DRS pod will be unique for this rear wing.

For Baku Renault have followed a similar path, with little change in the wing’s side profile across its span, merely a much shallower wing fitted in between the endplates. To package the smaller wing Renault have made some other changes, the outer 5cm area for the endplate, usually has five smaller aerofoil profiles, these are reduced to just four for Azerbaijan. Then the crease in the endplate, which usually filled with angled flaps to help with the upwash created by the wing, is simply left open with no flaps.

However the team found themselves short on downforce in second practice when compared to the larger rear wings their rivals were running. “We had a look at the competitors and ours certainly look smaller,” admitted Daniel Ricciardo, who was unable to do a race simulation after flat-spotting his tyre sets.

“I’m convinced now we’ll probably put a bit more on and go from there. I know Nico [Hulkenberg] struggled a bit with the long run and I think more wing will get a bit more temperature and load through the car so hopefully that helps us.”

The other way to balance drag and downforce for the rear wing is to reduce the power of the tip vortices by slackening off the load near the wing tips. This is done by reducing the angle of attack and chord near the outer spans of wing. This creates the curved or stepped frontal profile.

At this circuit we have Ferrari, McLaren, Toro Rosso and Alfa Romeo sporting these wings. The profile constantly changes from the outboard tip to the centre, to optimise the downforce to drag ratio. Each team has found very different geometries to meet their needs at this circuit.

McLaren, for example, has chosen to make a more abrupt step in the change from deep to shallow, in contrast to the other teams which have a more progressive change in span-wise profile.

Another way to take load and drag off the wing is to raise the leading edge of the wing in the middle. This direction is taken by an equal number of teams to the spoon design, with Mercedes, Haas, Racing Point and Williams adopting this approach.

Williams have perhaps taken a mixed approach as their wing also sees the wing tip profile flattened slightly, creating a ‘W’-shaped leading edge, gaining the best of both worlds, but not as an extreme ‘W’ profile as we have seen in the past.

Mercedes have added a further feature to its rear wing, by adding a serrated trailing edge to the main plane, which is not necessarily related to the wing profile chosen.

The serrations create a series of small vortices passing up and under the flap. But rather than creating unwanted turbulence, this is done on purpose. Normally airflow under a wing will be in tidy layers, known as laminar flow. At some point this breaks up into turbulent flow towards the trailing edge of the flap. This is OK, as the turbulent flow is still attached to the wing’s surface.

If this flow then breaks up and separates from the wing’s surface, then the wing stalls and loses downforce. The transition between laminar and turbulent flow is somewhat unpredictable, especially as DRS is closed.

So, having the serrated edge forces a switch to turbulent flow, rather than the airflow doing it of its own accord. This makes the wing more consistent and regaining downforce quicker as the flap clicks back into position as DRS closes. Mercedes have run similar serrations in the past, but it has been some two seasons since they were last raced.