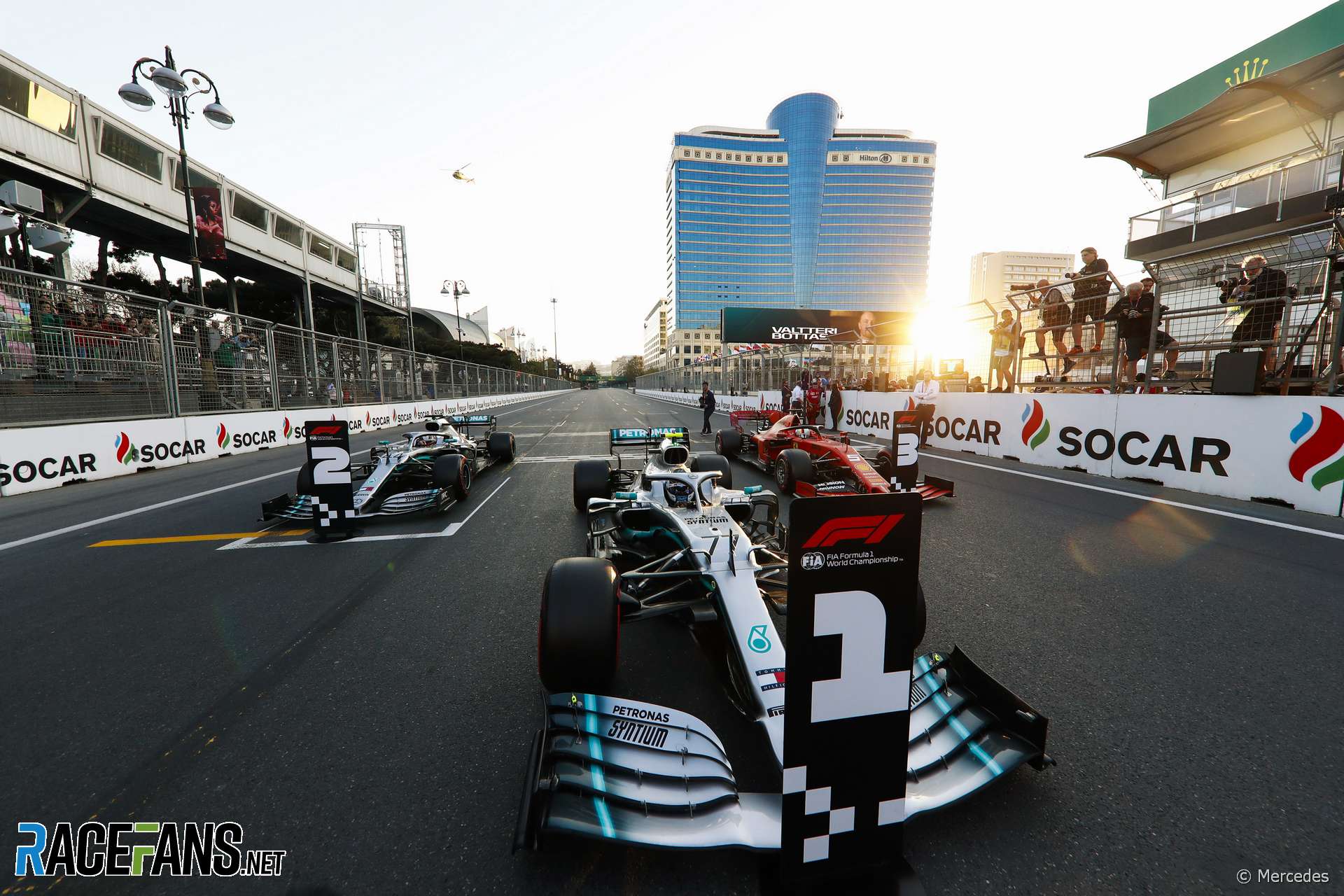 Mercedes delivered another blow to Ferrari hopes in qualifying for the Azerbaijan Grand Prix.

The red cars swept all three practice sessions, but Mercedes locked out the front row of the grid. Had Lewis Hamilton and Valtteri Bottas been hiding their true pace all long?

There’s no doubt Mercedes don’t run their engines as hard in practice as Ferrari do – they’ve admitted as much. But the one-and-a-half second gap between them in final practice was unusually large. Max Verstappen’s Red Bull got ahead of them as well.

The warmer track conditions during the final hour of practice seem to have played a role. Ferrari thrived in these temperatures, but the Mercedes came good when the track temperature dropped in the late afternoon session qualifying. Two red flags meant Q3 started around an hour later than scheduled, giving the track more time to cool, which team principal Toto Wolff said helped their car.

“It was tricky for us with the track conditions, with the temperatures dropping,” said Vettel after qualifying. Although he lost most of his time to the Mercedes in sector three, where he lacked a slipstream, the SF90 also wasn’t as strong through the middle of the lap.

“Obviously in sector two you have more so the corners, so it’s quite normal when you struggle with the car and don’t have the confidence around here, the place you lose most is sector two.”

The good news for Vettel is tomorrow’s race will begin almost an hour earlier than qualifying started, which should mean warmer track conditions. He is also starting on the cleaner, right-hand-side of the grid, and will surely fancy a pop at Hamilton as soon as the lights change.

In the other Ferrari, and no doubt also hoping for a warmer race day, Charles Leclerc can count himself lucky to be starting as high as ninth on the grid after his crash in Q2. The interesting dimension to Leclerc’s race is that he will start on the medium compound tyres.

This was Ferrari’s preferred strategy initially – both drivers began Q2 on the harder rubber. He will get to run that tyre earlier in the race while the rest of the drivers who reached Q3 will have to do so later in the race when the track is cooler. That could play into Leclerc’s hands and prove his ticket back into contention in a weekend he had dominated until his crash. He also has the benefit of two fresh sets of soft tyres, whereas the drivers ahead of him have all exhausted their supply.

Don’t rule Max Verstappen out of the fight either. Red Bull’s half-second deficit to pole position is in the same order to what we saw in China, and their race pace on Friday looked good as well.

After a lacklustre inaugural race in 2016, Baku has cultivated a reputation for unpredictable races. However a change in the rules since last year may mean we no longer see those spectacular restarts where the field charges to the start/finish line down the two-kilometre run from turn 16.

This is because drivers must now wait until the start/finish line, instead of Safety Car Line One, before overtaking another car at a restart. This means the race leader at a restart can afford to wait much later before accelerating, as they are under less threat from the cars behind.

While not all the Formula 2 drivers appeared to have got the memo – Sergio Sette Camara was punted into a wall during one restart today – expect all the F1 drivers to be up to speed.

Will Mercedes keep up their run of one-two finishes in 2019? Which of the Ferrari drivers is best-placed to fight them? And can Sergio Perez snatch another Baku podium?