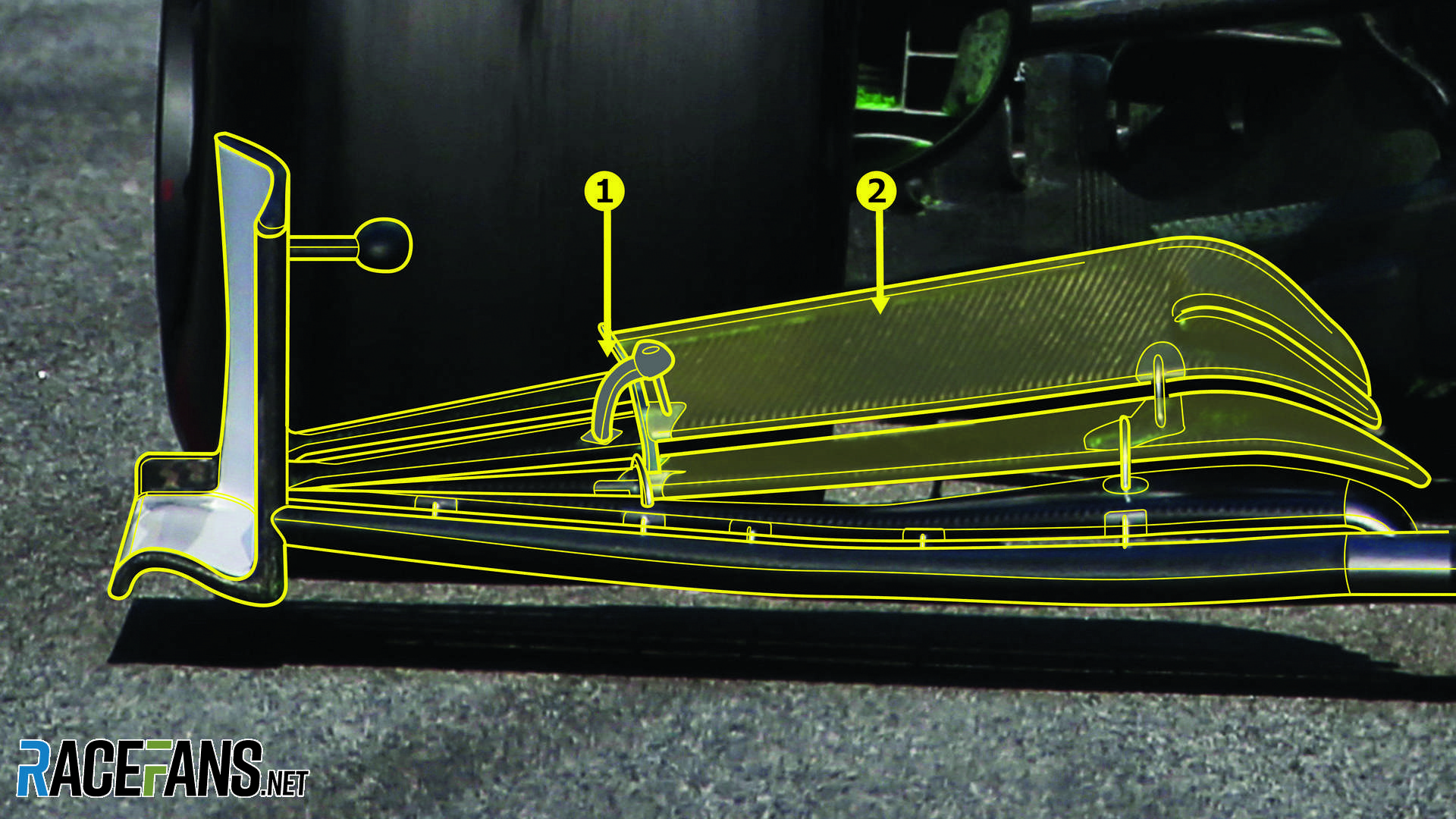 The Baku City Circuit, home of the Azerbaijan Grand Prix, demands a unique set-up for its long straights.

So while each of the teams brought updates, many of these were track-specific low-drag parts, rather than part of an underlying development path.

This forces the teams into a rather un-street track set up of super low-drag and therefore low downforce. How low they can go on wing levels to bring quicker lap times from speed on the straight varies from team to team.

Going too low on downforce will bring top speed, but the low-speed turns will then punish the tyres which have cooled on the straights with sliding, bringing graining and less grip. The balance of top speed and low speed grip also varies as the track rubbers-in and the ambient temperature changes.

Having been in the glare of the scrutineers in China, Mercedes brought further changes to the front wing endplate to meet the newly-enforced radius rule on the endplates. In the short space of two weeks since China, the team have reshaped the endplate cut out, altering the curve to bring the endplate over the wing tip, to meet the new technical directive.

Now the wing tip sits behind the endplate, to keep its sharp edge away from other car’s tyres. This change brings the endplate up to its third specification, with the current layout (3), from the initial spec (2) via the Bahrain spec (3).

Most of the other changes were related to the low drag set up, the flatter rear with its raised centre section and serrated trailing edge was run, complete with revised DRS pod and T-wing reduced to a single element, rather than the ‘coat hanger’ double element usually fitted to the car.

Given the layout of Baku the Ferrari pace was gained largely on the straights, as the car was shown to be slightly slower through the slow turns than Mercedes. Such is the Ferrari straight-line performance, that it ran a rear wing far larger than anyone else in the field, yet still topped the top speed charts. Albeit the biggest speed advantage was in free practice and qualifying, as the engine gets turned up.

Running its updated bodywork, another smaller detail was evident on the rear brake ducts. Part of the fin set up on the rear duct is a long curved vane mounted low on the side of the duct. This has been reshaped to fit in with the rest of the changes along the car, now the new fin is lower and angled upwards (1) being without the endplate fitted to the inner edge on the old version (2).

With some of the skinniest rear wings seen on the grid, Red Bull made few other changes to the RB15, other than some wing tip reshaping to meet the same technical directive as Mercedes.

Along with the super low-drag set up, the team also benefitted from the new-spec Honda engine. All Honda drivers gaining a new internal combustion engine. This Honda upgrade was claimed to be mainly for reliability reasons, but confirmation came from the team that more power was released from the updated V6, especially in qualifying trim.

The MGU-K which let Nico Hulkenberg down in China did not need to be replaced. This was a good start to Renault’s weekend, but the car suffered on the Baku layout.

Unable to gain top speed relative to its more powerful rivals, the RS19 was shorn of much of its wing level to bring it back on par, but this only made the car suffer through the slow turns and with tyre management.

Along with revised front wing flaps, two low-drag wing set-ups were employed: The simpler, flat rear wing plus a another more complex wing with a larger change in its leading edge profile. The wing’s leading edge rises to be higher near the middle, but the middle section between the wing mounting pylon has a pronounced dip.

After four races McLaren’s only obvious change to the MCL34 in Baku was a revised fin set up on the rear brake duct. Now, there are a series of four fins on the inlet scoop, compared to the simple flap fitted before.

These new parts appeared to be 3D-printed in resin and bonded to the carbon of the brake duct. Teams can bring parts to the track much quicker using this technology.

After the power unit failure for Antonio Giovinazzi in China, Alfa Romeo were able to modify the mounting within the sidepod to accommodate the updated Ferrari control electronics. The electronics were updated to prevent a recurrence of the injector failures suffered at the previous two races.

Alfa’s original packaging set-up meant that the new unit could not be fitted, so revised parts had to be made. This should bring the reliability back on par with the other Ferrari-engined cars. While the control electronics were updated, Alfa still run the double waste-gate exhaust set up, having not yet switched to the single wastegate pipe as run by Ferrari and Haas.

The part that proved to the problem was the hook, this is the aluminium angled part that support the threaded adjuster. This was replaced with a different specification in parc fermé due to a shortage of spares.

The FIA took an interest in the change and rechecked the wings flexibility with the new spec part and the wing failed the standard deflection test, that places a load on the wing’s trailing edge. With the test failed it was inevitable that the qualifying time was removed and Raikkonen had to start from the back of the grid. It was unlikely that Alfa Romeo were seeking an advantage with the switch of parts, only circumstances forced the use of the part.

Williams have a lot of problems this year, so the damage caused to George Russell’s car by a broken drain cover in first practice was something the team absolutely did not need. It wrecked the underside of the driver safety cell as the leading edge of the T-tray splitter hit the metal cover.

The lowest point on the car is the leading edge of the T-tray splitter, mounted under the raised section of chassis (shown arrowed). Teams want to run steeper rake angles to make more of the underbody downforce and lower front wing. But the T-tray becomes an obstacle as it sits so low, the front cannot ride any lower nor the rear cannot be raised any higher, without fear of running the T-tray into the ground. The car is effectively pivoted around the leading edge of the splitter and plank below. This is the part that causes most of the sparks as it runs along the track at high speed or under braking.

To prevent teams pushing the splitter into the track, the plank and skid blocks underneath are checked for wear, while the splitter itself must meet FIA stiffness tests. To meet the tests the team’s add a stout carbon fibre beam (1) inside the splitter that runs back to bolt to the monocoque behind. It would have been this splitter support beam that hit the drain cover pushing itself back into the monocoque, then damaging other hardware around it.

The impact set off the fire extinguisher (2) which sits inside the monocoque just behind the splitter beam mounting, the slow motion replay shows the DRS wing flap opened under the sudden deceleration. Further back underneath the chassis are the ERS control electronics and battery (4) and the fuel tank (3), if these had been damaged from underneath there would have been far more serious consequences from the incident.

As teams always bring a spare monocoque to each race, it was instead a long laborious job to rebuild the damaged car into the new tub.