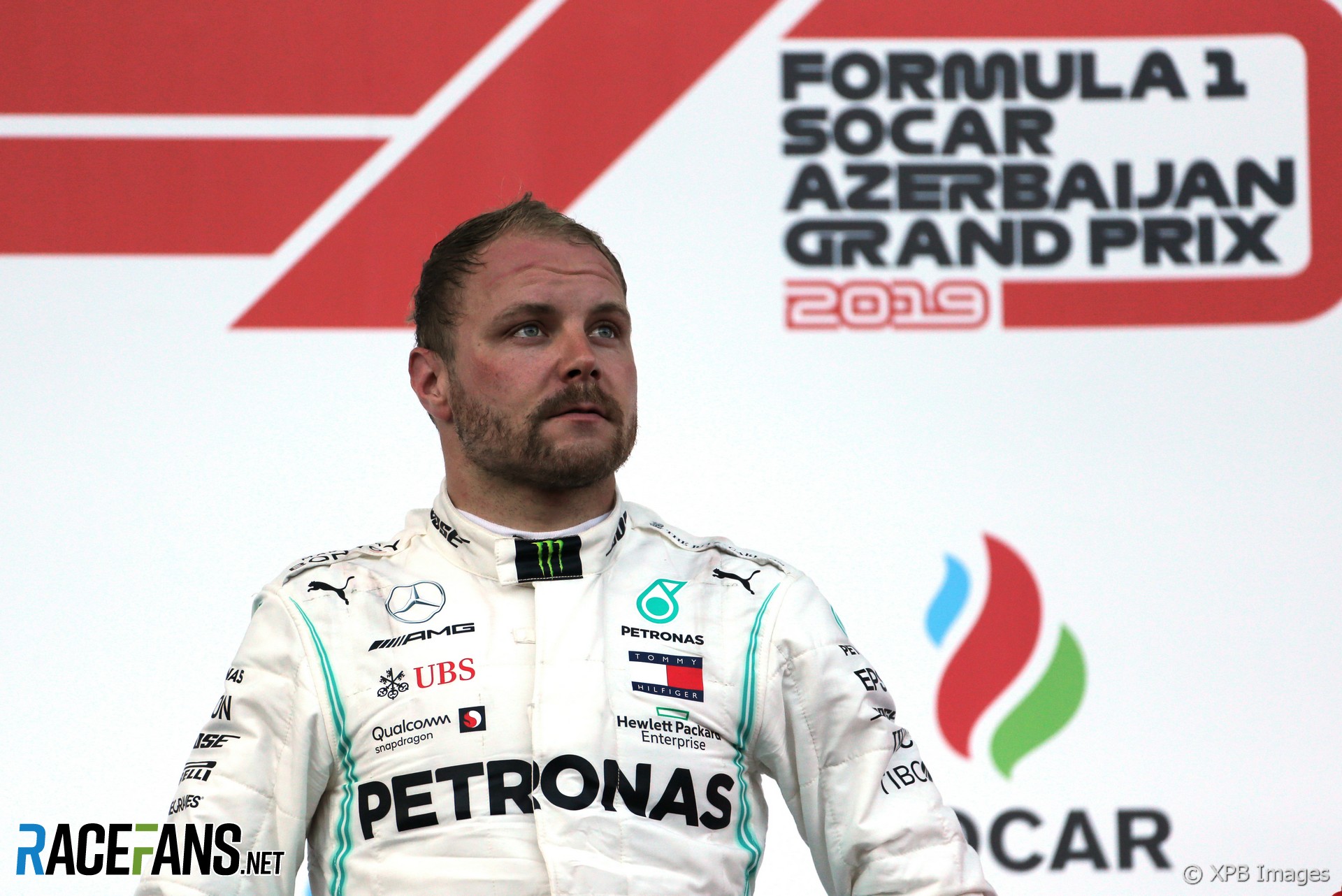 Before the season began the biggest potential threat to reigning world champion Lewis Hamilton appeared to come from rivals Ferrari.

But the Scuderia has largely failed to live up to its pre-season testing form, and Hamilton instead faces a renewed challenge from within his own team. Valtteri Bottas has matched Hamilton’s two wins, and while last year he was 30 points adrift in the championship at this stage, after Azerbaijan he holds a one-point lead over his team mate.

Four races in, it’s 2-2 between the pair in the all-important qualifying battle. Bottas has clearly clicked with the W10 and started 2019 in far better shape than he ended the previous season.

This isn’t the first time Bottas has started a season strongly. In fact since he joined Mercedes he’s tied 2-2 with Hamilton over the opening four races in all three seasons, then dropped off the pace over the rest of the season. In both 2017 and 2018, he seldom out-qualified Hamilton after the summer break:

So is it really the case that we’re looking at a faster, stronger ‘Bottas 2.0’, or does he just tend to start a season strongly and then fade? Does he have the knack of mastering a tricky car quickly, while Hamilton is taking longer to play himself in with a car he has described as “tricky to work with”?

Bottas doesn’t see it that way: “For sure Lewis can adapt as well to difficult car to drive. But maybe it depends more like how the car is actually behaving in which way.

“Sometimes he can extract more and sometimes he might struggle more. For me the same thing, it really depends on the circumstances so I can’t really point out one particular trend why it would be differences between us.

“It’s all about details as we’ve seen in the past few years our car is very quick but it’s also sometimes been so easy to get it completely right in terms of set-up and it’s not always maybe the most easier car to drive.”

However he does believe he has narrowed the gap to Hamilton over the off-season. “Every year performance-wise I’ve been able to make steps in my career and again I feel I’ve made one,” he said.

“Obviously it’s a long season ahead and again long season still with an opportunity to improve during the year. But early stages, yes, performance-wise we’ve been close which is good and also the points we’re close at the moment. There’s no magic it’s just working on how to improve, focusing on the details.”

Given his experience and history with the team, plus his status as a five-times champion, Hamilton might be expected to have more of a say on Mercedes’ development direction. However Bottas feels that, following changes on his side of the garage, he is having more input on the progress the team is making.

“I think this year has been a bit different to last year,” he explained. “I’ve been maybe a bit more direct and maybe can say aggressive in terms of how big changes we’ve been making in the practice and what kind of set-up directions we’ve been taking.

“As the years go by you gain confidence in knowing what you exactly need from the car and how you feel the car will be quicker for you.”

As his former race engineer Tony Ross has moved over to Mercedes’ Formula E programme, Riccardo Musconi is now in charge on the number 77 Mercedes. Bottas says this “brings maybe different ideas on the table and different way of thinking which then makes me also think different things on the set-up, what we work me and for the car and for the quali, for the race, so on.”

The driver says he is in better shape too. New rules setting a minimum weight limit for drivers have allowed him to put more weight on, and Bottas said this was his first F1 off-season where he hasn’t fallen ill.

Following another one-year renewal on his contract, Bottas came into 2019 aware Mercedes have Esteban Ocon waiting in the wings for an opportunity to take arguably the most coveted seat on the grid. Bottas has surely seen off that threat, but the question now is whether he can do what his predecessor Nico Rosberg did and beat Hamilton to the title.

“For sure it’s not easy to beat him,” said Bottas. “it’s always difficult to be ahead of him. But I know it’s possible and it’s been closer and closer as we’ve been together in the team.”

Whether Bottas can sustain his recent form will be crucial to his championship chances. The margins between the pair have been incredibly fine – less than a tenth of a second in the last three qualifying sessions. If Bottas can qualify ahead at the next two races – Spain and Monaco, both tracks where overtaking is notoriously difficult – he will be superbly placed to stretch out his hard-won one-point lead.