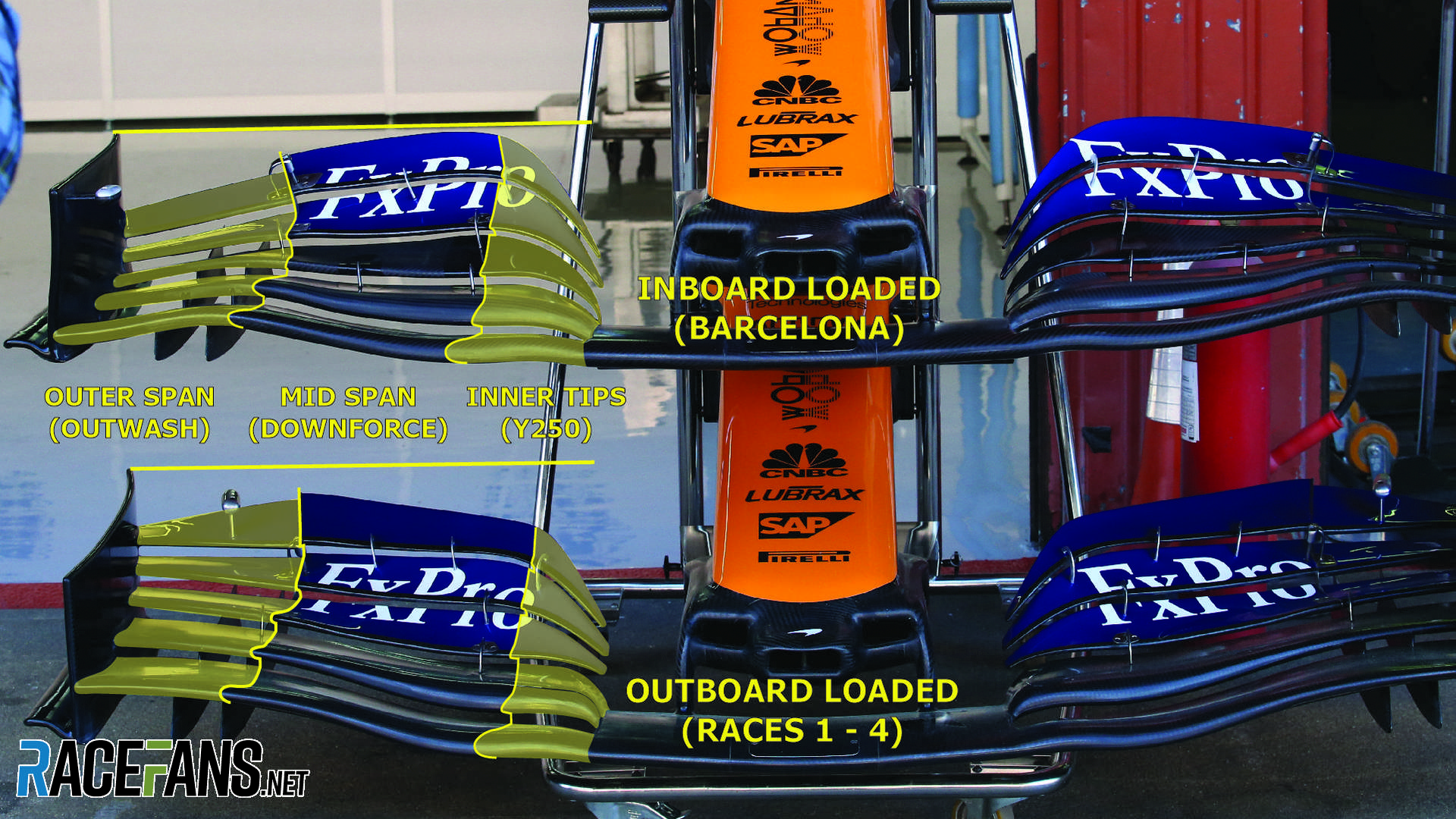 McLaren are quietly building a case to be regarded as the revelation of the season so far, having struggled for so many years. Despite a down-on-power Renault engine, their chassis is clearly working really well with the new specification Pirellis and the team is working its way up from the back of the grid.

Whatever McLaren changed over the winter on the chassis and aero have worked, even if some of the aero features were somewhat idiosyncratic. In Spain some of those unique aero features on the car have been changed for more conventional solutions. The Barcelona changes add up to a major update for the MCL34. Already a long list of obvious changes can be spied, and more may be hidden from sight.

At the front, McLaren are the first team to switch from one of 2019’s two main front wing concepts to the other. They have switched from an outboard-loaded wing to an inboard-loaded design. This significant change will have prompted other updates further downstream on the car.

McLaren has moved away from the Red Bull/Mercedes front wing philosophy towards the Ferrari/Alfa Romeo camp (see image above). The two designs try to achieve similar things in different ways in reaction to the new rules for 2019. As detailed here previously, F1 front wings need to achieve three tasks: generate downforce, produce ‘outwash’ and manage the Y250 vortex. To do this they manage the airflow downstream which allows other areas of the car to do their job creating downforce.

The outboard-loaded front wing is the more conventional design, as raced by Mercedes and Red Bull. This solution adopts a steeper wing towards the outer span and somewhat shallower towards the middle, meaning the downforce is created outboard near the endplate, which in turn helps create some outwash around the front tyre.

The inboard-loaded wing design is effectively the opposite, so the wing is steeper near its inner tips and flatter towards the endplate. Ferrari, Toro Rosso and Alfa Romeo follow this route. Its gain is the endplate is opened up for a greater outwash effect, but the steeper inboard sections take airflow away from the bargeboards, making them less effective. A popular fallacy persists that an inboard-loaded design cannot create the same level of downforce as an outboard-loaded design.

McLaren’s inboard-loaded front wing design as brought to Barcelona follows the other teams with this concept, it is truly a new front wing, little of the leading edge profiles match from the new to the old specification. Even the endplate (above) is subtly different, with the rear corner of the endplate featuring a small cut out.

In the middle of the car, the team has also adopted a different philosophy with its bargeboards. From its launch and even with the Bahrain update the bargeboard package featured the distinctive rectangular ‘boomerang’ set-up, leading the rest of the vanes behind it.

The boomerang still works to produce a downwash effect towards the sidepod’s undercut, while the pod vanes have become more powerful. These vanes achieve a couple of effects, firstly to straighten the airflow expanding outwards in front of the sidepods, this keeps the tyre wake from the rear of the car and directs the stronger inner airflow towards the diffuser. Then as the airflow passes through the vanes the curved lower edge creates downforce like a wing.

Along with these major bargeboard changes there are several detail modifications to other surfaces to accommodate the change is the boomerang and pod vanes.

Another noticeable feature, unique to the McLaren in the opening races, was the ‘baby shark fin’, which bore the driver’s number and will have helped direct airflow under the rear wing when cornering. Now McLaren have extended the whole of the spine of the engine cover to the maximum area allowed. This change makes aerodynamic sense, but the small fin will be a legal requirement from 2020 onwards, so they might have been expected to keep the design to gain more data from it.

With the Renault engine, McLaren have run a stepped rear wing profile to improves its aero efficiency. In its Barcelona spec, there is a full depth rear wing with effectively straight profiles across its span. This would be a higher downforce and higher drag rear wing, which would infer a top speed penalty.

With Barcelona’s long straight this might be seen a negative direction to take, perhaps the major upstream changes have improved aero efficiency by driving cleaner airflow towards the rear and diffuser, by managing front tyre turbulence far better. Further aiding the rear wing’s work are several strakes on the outer face of the endplate.

Daniel Ricciardo has revealed Renault have a reliability upgrade for their power unit this weekend. It is not yet known whether McLaren are running it.

This upgrade places McLaren as one of the few teams to have not just brought major update, but to have switched aero philosophies. Even Mercedes’ update in week two of testing was not as big a change in direction as this one.

With change comes risk, such a major change may not work, but McLaren must have been confident that their pre-season predictions and the resulting reality of the early season package matched. If that correlation was accurate, then it stands to reason that this update should also perform as expected.

Such a drastic change must have brought gains in performance for McLaren to have taken such a drastic step, so their place in the midfield with its rival taking less drastic steps may been cemented with this change.