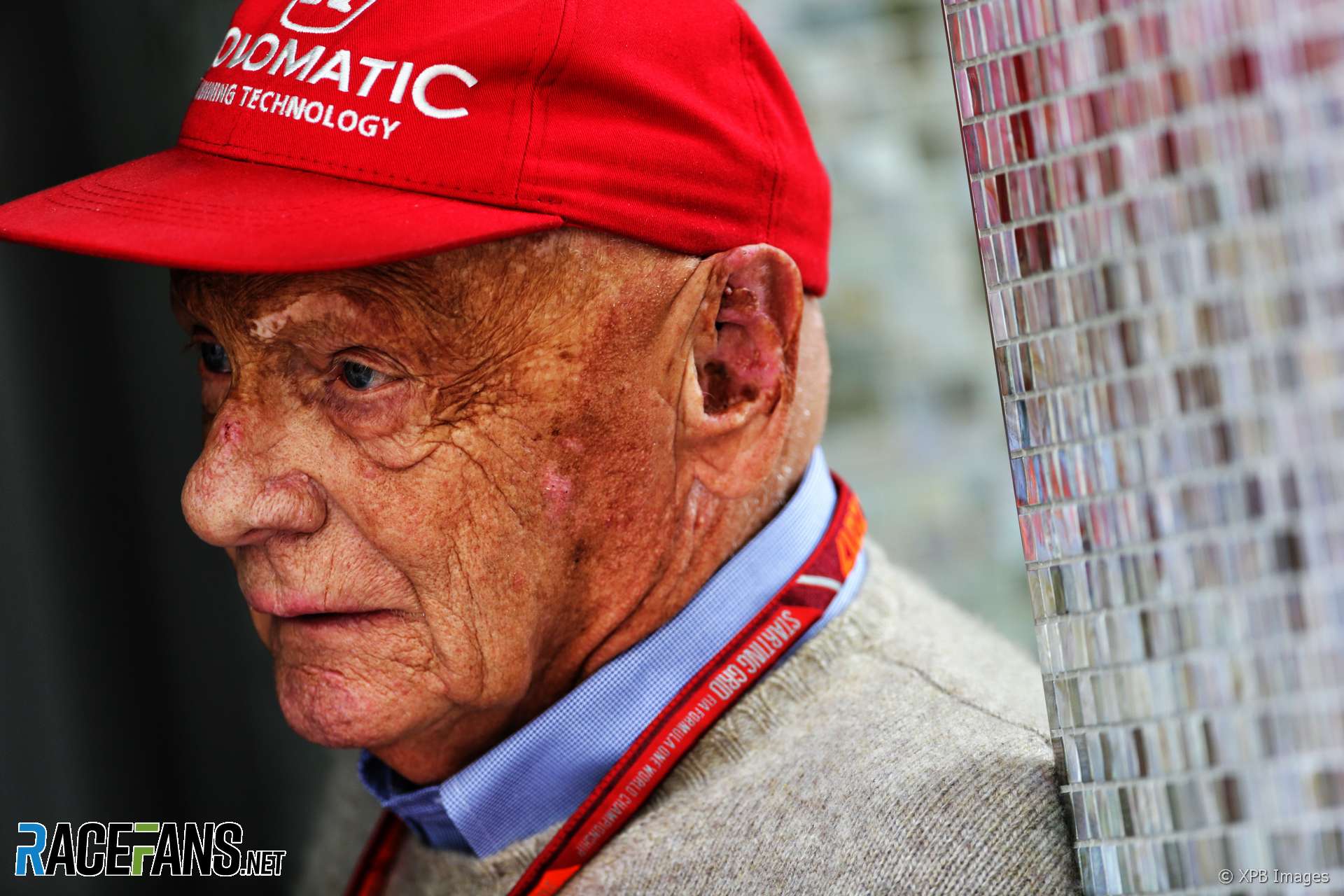 The Formula 1 community is morning the death of Niki Lauda, who passed away yesterday.

Tributes to the three-times world champion have come from drivers past and present, teams and senior figures in the sport.

First of all, on behalf of the team and all at Mercedes, I wish to send our deepest condolences to Birgit, Niki’s children, his family and close friends.

Niki will always remain one of the greatest legends of our sport – he combined heroism, humanity and honesty inside and outside the cockpit.

His passing leaves a void in Formula One. We haven’t just lost a hero who staged the most remarkable comeback ever seen, but also a man who brought precious clarity and candour to modern Formula One. He will be greatly missed as our voice of common sense.

Our Mercedes team has also lost a guiding light. As a team-mate over the past six and a half years, Niki was always brutally honest – and utterly loyal. It was a privilege to count him among our team and moving to witness just how much it meant to him to be part of the team’s success. Whenever he walked the floor in Brackley and Brixworth, or delivered one of his famous motivational speeches, he brought an energy that nobody else could replicate.

Niki, you are quite simple irreplaceable, there will never be another like you.

It was our honour to call you our chairman – and my privilege to call you my friend.
Toto Wolff, Mercedes team principal

I’m struggling to believe you are gone. I will miss our conversations, our laughs, the big hugs after winning races together. God rest your soul.

Thank you for being a bright light in my life. I’ll always be here for your family should they ever need me. Love you man.
Lewis Hamilton

The motorsports world has lost its greatest fighter. The Mercedes family has lost an amazing mentor. And I have lost a true friend. Thanks Niki.
Dieter Zetsche, chairman of Daimler AG and CEO of Mercedes-Benz Cars

We are mourning the loss of a very special person who showed terrific fighting spirit. Niki Lauda achieved enormous success and had a huge impact on motor racing. He was an exceptionally talented racing driver and a real inspiration as a businessman. His family are in our thoughts at this sad time.
Ola Kaellenius, CEO-elect of Daimler AG and Mercedes-Benz AG

It is with great sadness that we learned of the death of Niki Lauda. Formula 1 has lost not only one of the truly great exponents of the sport but also one of its heroes. His love of racing and the courage he demonstrated were simply extraordinary and he inspired so many fans. His passing is a great loss for the entire Formula 1 family and motorsport as a whole. All our thoughts go out to his family.
Chase Carey, Formula 1 chairman and CEO

Niki Lauda was a hero of motor sport, who inspired me in my youth. He is a milestone in the history of Formula One. All my thoughts go out to his family, friends and to Mercedes.
Jean Todt, FIA president

Niki Lauda was an icon of our sport and a man whose achievements place him firmly in the pantheon of Formula 1 greats. When I look back at his career as a driver, it’s Niki’s singular approach that marks him out – methodical, calculated, thoughtful and precise.

In some ways you might say that he was perhaps not as naturally gifted as Ayrton Senna or Michael Schumacher, but his approach to races – his intelligence and remorseless application – was outstanding. People who worked with him as a driver often told me how good he was at developing a car and in providing exactly the right information to the engineers.

And the proof of that rare ability to extract the maximum from the package at hand lies in his outstanding achievements. The numbers speak for themselves: 171 grand prix starts, 24 pole positions, 54 podium places, 25 wins and three Formula 1 world drivers’ championships.

Of course, you cannot assess the scale of Niki’s achievements without considering the events of 1976. What he accomplished following his accident at the Nurburgring was absolutely astonishing. In those days, media coverage of sport was nowhere near as encompassing as it is now, and we had no way of really knowing the trauma he had been through in the weeks following his terrible crash. It was only when I watched the film ‘Rush’ that I think I fully understood just how truly heroic Niki’s return to racing was. Without a doubt it deepened my admiration for him. He was a true hero and his comeback at Monza, just 40 days after his crash, is one of the greatest examples of courage and indomitable will in all sport.

After watching him from a distance for many years, we eventually worked together when he joined Mercedes towards the end of 2012. The first task we jointly embarked upon was to close the deal for Lewis Hamilton to join the team. Niki was instrumental in that process. I had managed to convince Lewis to join us, but it was Niki who persuaded the Mercedes board to give us the money for Lewis’ retainer, no easy task. It was to prove a landmark moment in the team’s current Formula 1 journey.

Thereafter, Niki began to visit the factory with greater frequency. He didn’t have to do it, but he wanted to understand the team’s process, he wanted to be hands on. I’ll admit that he had a very blunt approach and there were plenty of occasions when we bounced off each other, but I think that in the time we spent together at Mercedes we found a good working arrangement that ultimately benefited the team. It was always valuable to have Niki’s counsel, not on operational matters, but more in terms of the wider perspective, and after more than four decades in the sport, perspective was Niki’s great gift – even if he was often unequivocal in his delivery of that vision.

His legacy is huge. He was successful as a driver at the maximum level and later brought his intensely logical approach to his entrepreneurial adventures. Indeed, I remember that he sometimes brought the management team from his airline company to the races and used parallels with Formula 1 to push them to greater achievements. He was an important part of the development of the team currently dominating Formula 1 and which is likely to become most successful in the history of the sport.

Niki’s loss is of huge significance to Formula 1. Ours is a sport that revolves around larger than life personalities and Niki was one of racing’s most formidable characters. His presence in the paddock was a reminder that Formula 1 is a sport of heroes, an arena for competitors who push past common limits of fortitude and endurance and find an elevated plane beyond the ordinary. Simply, he was a legend.
Ross Brawn

Although I knew that Niki’s health condition was critical, I always expected him coming back to the track. I am very sad to realise that this will not be the case.

I will keep Niki in mind as a very professional and successful racing driver by winning the Formula 1 championship three times, but he was also a really strong business man. Formula 1 loses one of the most important ambassadors for the sport. My deepest condolence to the family.
Franz Tost, Toro Rosso team principal

I’ll never forget that one of the few times that you took your hat off was for me. My condolences to his family.
Sergio Perez

Niki, you were a true legend and a wonderful man. May you rest in peace.
George Russell

Shocked by the loss of Niki Lauda. He was a true legend in our sport and someone I had great respect for. May he rest in peace.
Max Verstappen

Very saddened to hear that Niki Lauda has passed away. One of the last proper heroes of our sport, a true gentleman, and a great human. Rest in peace.
Carlos Sainz Jnr

Can’t find the words. A special person has passed away. Rest in Peace, Niki.
Nico Hulkenberg

Rest in peace Niki we will all miss you legend. All my thoughts to his family.
Esteban Ocon

All at McLaren are deeply saddened to learn that our friend, colleague and 1984 Formula 1 World Champion, Niki Lauda, has passed away. Niki will forever be in our hearts and enshrined in our history.
Statement from McLaren

Niki, you were an inspiration to us all – not just those in the F1 paddock, but across the motorsport world and beyond. Rest in peace, legend.
Statement from Racing Point

It is with great sadness that we say goodbye today. Not many have embodied our sport like you, with such courage and passion. You are an inspiration, a true great, a legend. Thank you Niki. Rest in peace.
Statement from Renault

Everyone at Ferrari is deeply saddened at the news of the death of our dear friend Niki Lauda. He won two of his three world championships with us and will always be in our hearts and in those of all Ferrari fans. Our sincere condolences go to all his family and friends. Ciao Niki.
Statement from Ferrari

A true great of the sport both in and out of the car. Rest in peace Niki.

The thoughts of everyone at Williams are with his family, friends, and colleagues at this difficult time.
Statement from Williams

With the passing of Niki Lauda, motorsport has lost one of its most prominent figures. Regardless of his accolades as a driver, businessman, television expert or as the chairman of the Mercedes Formula One team, he certainly left his mark. All of us, who have worked with him, will miss him tremendously. Our thoughts during these difficult times go out to his family
Dieter Gass, head of Audi motorsport

We are deeply saddened to learn of the passing of three-time Formula 1 World Champion Niki Lauda and extend our condolences to his family and friends during this difficult time.

A highly accomplished athlete and entrepreneur, Niki is an inspiration to many both on and off the racetrack, pushing everyone on his team to always strive for the best. Niki is proof that passion is the fuel for success, and his dedication, courage and resilience will live on.
Colin Syn, Singapore Grand Prix deputy chairman