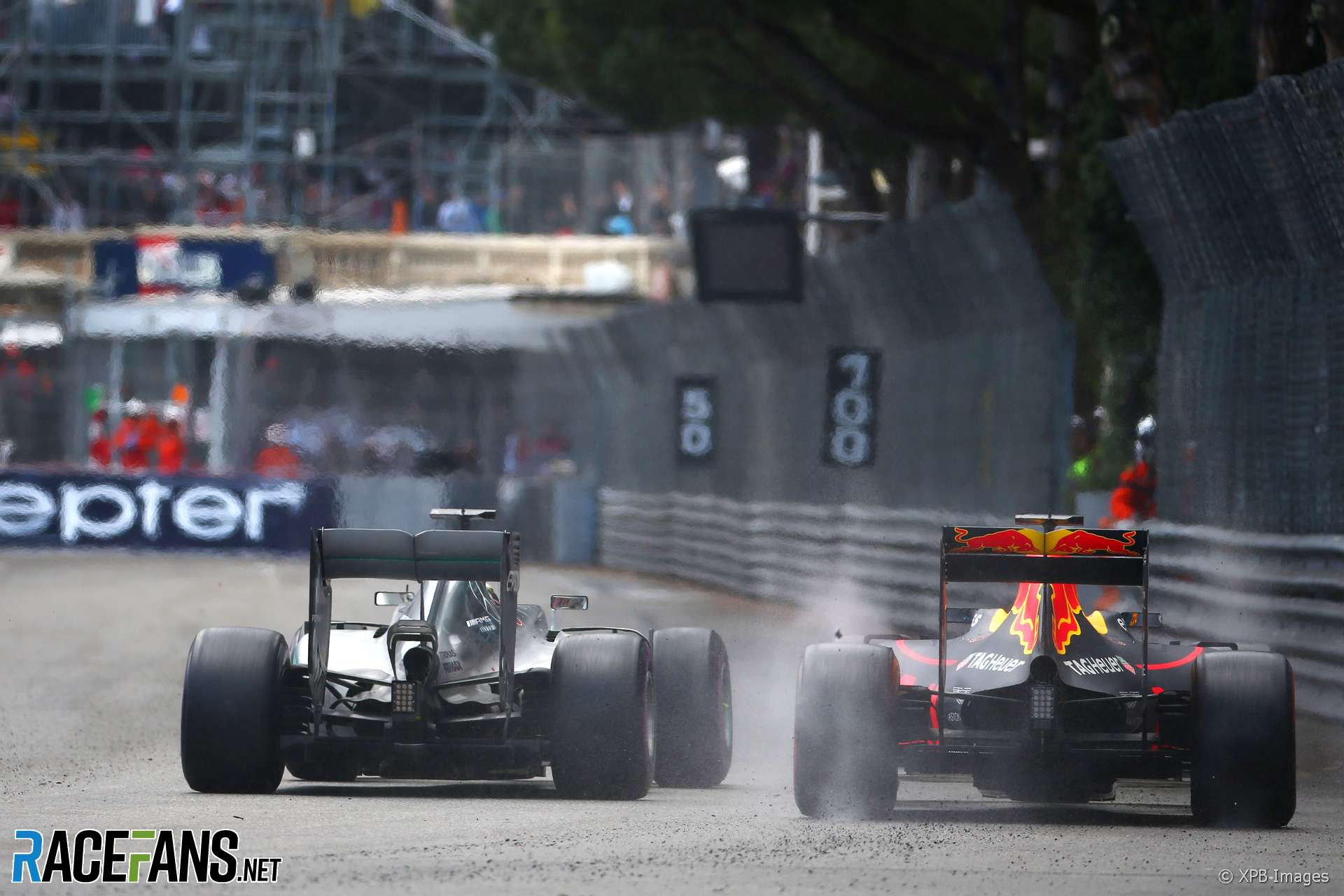 In the round-up: Daniel Ricciardo says there was a stronger case for giving Lewis Hamilton a penalty for his driving in the 2016 Monaco Grand Prix than there was for Sebastian Vettel’s incident with Hamilton at the last race.

Hamilton prevented Ricciardo from passing him after going off the track while leading the 2016 Monaco Grand Prix but wasn’t penalised:

There’s certainly some similarities with it, there is. And if they do take that then he didn’t get a penalty so Seb shouldn’t have got one. They were pretty similar.

I think to be honest in Seb’s defence – to bias that situation even more towards him, and I’m not taking sides I’m just putting it how it is – he had to go across grass. So he made a mistake, yes, but in a way he kind of paid a bit more of a price because he went across grass, could’ve maybe lost the car there, had dirt on his tyres. So he kind of already paid a little penalty, where Lewis went across Tarmac so he just kind of cut the corner and got away with it. So I would bias it even more towards not giving Seb a penalty in that scenario and they didn’t give Lewis one.

And I think that day I was pretty filthy about it. But I was more filthy about the pit stop incident. I probably said Lewis should have got a penalty. I’m not mad that it didn’t get handed. But looking at Montreal I don’t think that should have been.

Quite funny in the Vettel presser. He kept being asked about Canada and they kept asking for questions not about Canada so the new game became, how to ask about Canada without saying the word Canada. Much hilarity! #F1

A good few hundred people gathering now on parliament square in Bern. 🇨🇭 "Disruption of everyday life" seems to be the most popular complaint amongst those I've talked to. Some residents have created posters: "Formula E, that's bollocks 💩", "Sustainable? No." #ABBFormulaE pic.twitter.com/JlAdtDZ2ma

Alonso: I would return to F1 if given a championship-level car (Marca)

"Back in 2016, when Nico Rosberg decided to retire, I spoke with Toto Wolff. But we never reached a definite agreement."

"A letter of intent from the city council has been sent to Formula E Holdings Ltd. which will decide if it conducts an official feasibility study."

Magnussen: Steiner did well to shut me up (Autosport)

"I realised my message sounded more offensive to the team than I meant it to be. I think I assumed that people understand we have a good car, and that the only thing that holds us back is us not being able to work the tyres right."

"As a team we need to do fewer mistakes and we need to work harder — which we have done after coming back from Canada, to get the full potential out of our car."

"We also could not do a proper grid walk at the BBC, as you were restricted as to where you could go by FOM. I was literally arrested by Pasquale Lattuneddu, Bernie’s number two man, by going over some yellow line, and had to sit outside the (Formula One Management) office for several hours like a naughty school boy!"

"Alonso, if he does not drive the 24 again, will stand alongside them for good but it is a shame that he is not sticking around for further attempts. Both his wins came when Toyota faced no manufacturer competition and were the class of the field."

Does the plan to add banking at the final corner at Zandvoort make sense?

The corner is being designed to be ‘flat out with DRS open’. Sounds a lot like a straight. Should be a good spectator area, but no grandstands, just some grassy banks.

The concept of building a banked, high-speed corner to avoid the cost of a larger run-off area, while I understand the physics and logic, sorry, this one just doesn’t seem right.
NS Biker (@Rekibsn)