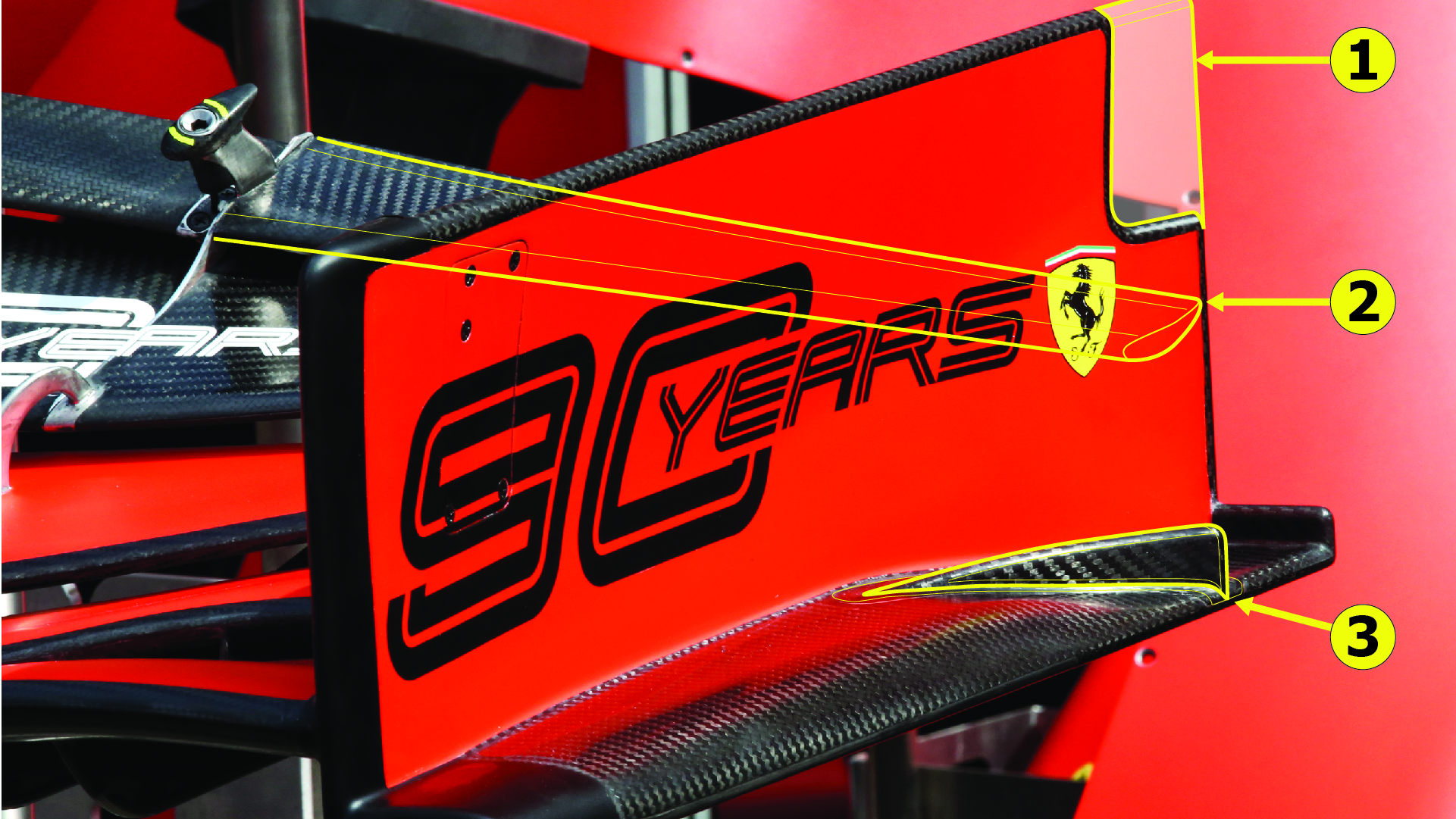 At the French Grand Prix Ferrari have introduced what they call their first upgrade since the Spanish round.

Several of the updates were pulled from the car after practice. According to the team, this is because they were being tested for future use, and doesn’t mean they haven’t worked as expected. Team principal Matteo Binotto explained that the changes at this stage in the season are the not the fix for the car’s maladies, but steps towards a fuller solution.

On Friday at Paul Ricard the car sported a revised front wing, floor edge and diffuser. The most notable is the front wing development, which retains the much-discussed inboard-loaded front wing design, but has revised details around the endplates.

Ferrari are one of a group of teams who have flattened the front wing to nearly nothing towards its outer tips. This frees up the endplate to create outwash – driving the air out towards the sides of the car, an effect the 2019 aerodynamic regulations have sought to minimise – while needing a steeper wing section towards the middle of each span to create enough downforce.

Their developments this weekend include updates to what was previously quite simple endplates. Each now features a cut-out (1) on its trailing edge which allows air pressure built up above the wing to spill out and create more outwash. To help this effect, Ferrari have added a small amount of extra front wing angle to the outer tip (2). This isn’t a reversal of the inboard-loaded concept, but merely a means to form a more powerful vortex exiting the cut-out.

Further aiding the outwash effect, the footplate section of the wing is augmented with a small fin. The fin helps the vortex formed under the footplate to be more powerful. In this position the fin is legal as it sits in the space reserved for the footplate and thus below the regulatory area that demands no add-ons to the endplate.

Ferrari have also been careful to make the fin quite thick and have ‘radiussed’ its outer edges, to meet the technical directive issued to prevent puncturing other car’s tyres. This is a regulation Mercedes and Red Bull fell foul of earlier this year.

Further back along the car, the floor edge has had even more fins added to it. There are two extra pairs of fins added the lengthwise slots formed into the floor. Additionally, Ferrari have reshaped the three fins just ahead of the rear tyre. These fins direct airflow outwards, working with the floor edge slots to create outwash from the high pressure built up along the top of the floor, which helps the Y250 airflow.

More slots and edges have been added to the vanes inside the diffuser. Although these aren’t an outwash feature, merely a means to pull more flow under the floor for more downforce.

Caution should be advised when assessing these changes, these won’t be the silver bullet Ferrari fans are looking for. They are small exploratory step and Paul Ricard remains a tricky track for Ferrari.

But these are amongst the bigger changes we’ve seen from Ferrari this season, so their development rate is finally being stepped up. It’s an encouraging sign for the rest of the season, though Mercedes have already done severe damage to their rivals’ championship hopes.

3 comments on “Analysis: How Ferrari has evolved its novel front wing”