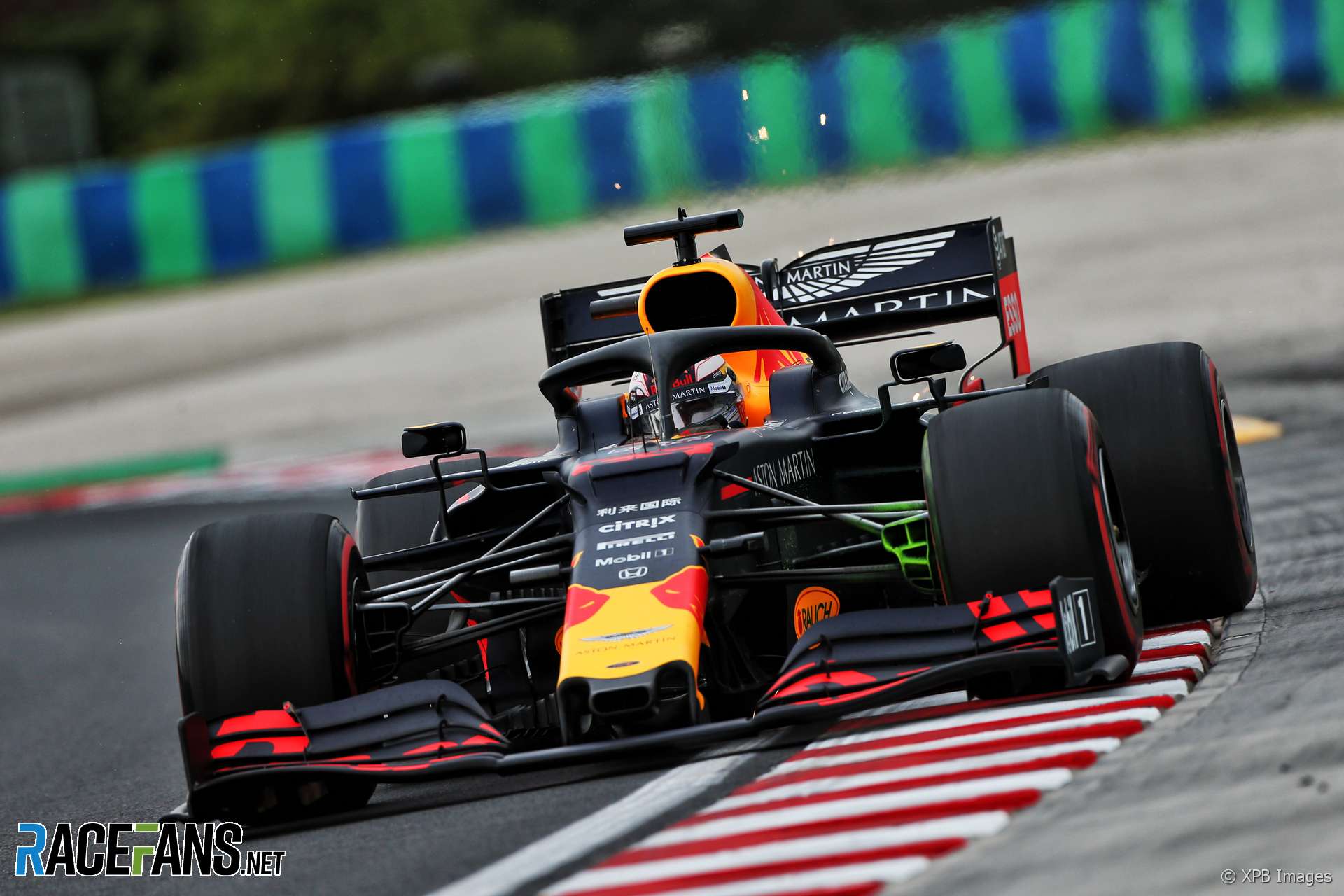 Max Verstappen has finally scored the first pole position of his Formula 1 career, narrowly holding off the Mercedes threat at the Hungaroring.

Verstappen leads Valtteri Bottas on the grid for tomorrow’s race, the pair split by just 18 thousandths of a second.

Lewis Hamilton claimed third place ahead of Charles Leclerc, who bounced back after hitting a barrier in Q3.

Charles Leclerc easily set a time quick enough to reach Q3 with his first run. But Max Verstappen banged in a lap which was half a second quicker, and Leclerc wanted to see where else he could find time.

He found some in the middle sector of the lap, where he was fastest of all, but coming out of the final corner he got sideways and the Ferrari smacked the barrier on the exit. The rear wing was clearly damaged and Leclerc was summoned back into the pits.

While Ferrari worked on Stroll’s car, George Russell was wielding the much-improved Williams to excellent effect. He lay 14th after his second run, but fell to 15th when Romain Grosjean improved his time.

Russell’s final effort temporarily lifted his Williams to the rare heights of ninth. But then his rivals began to improve, and almost to a man they demoted him back towards the drop zone.

Kevin Magnussen’s lap time was finally enough to eliminate him, by a mere five-hundredths of a second, but this was still a huge improvement for a team which has struggled to lift itself off the back row of the grid. Russell also out-paced his team mate Robert Kubica by 1.2 seconds.

The pair bookended the two Racing Points and Daniel Ricciardo. The latter had tried to go around the outside of Sergio Perez at the final corner as he began his lap, spoiling his final run in the process.

The six drivers from the ‘big three’ teams all left the pits on medium compound tyres at the start of Q2. That included Leclerc, who proceeded to demonstrate there was little wrong with his repaired Ferrari by out-pacing his team mate on the harder tyres.

Both, however, were beaten by the Mercedes pair and Verstappen, who split them. The Red Bull driver was just 25 thousandths of a second slower than Hamilton.

That cast a shadow over his team mate’s performance. Pierre Gasly, who’s struggled to get through Q2 on the harder tyres previously this year, was eight tenths of a second slower than Verstappen after his first attempt.

“I lost the rear completely out of turn eight,” he said after his first run. “There is much more. I can find five tenths.” He stuck to his guns and went for another run on the mediums. Although he didn’t find his missing time, he was still quick enough to reach Q3, albeit in ninth place.

Nico Hulkenberg missed out on the last place in Q3 by four-hundredths of a second. The two Toro Rosso drivers also dropped out, while Kimi Raikkonen and Romain Grosjean left their team mates behind.

The first runs in Q3 produced fireworks. Hamilton put up the quickest time to begin with, but looked slightly scruffy through the chicane. Bottas took provisional pole position off him, but only by a hundredth of a second.

Leclerc began his first lap well but Vettel was even quicker. The pair fell short of the Mercedes at the line, however. Verstappen was the real threat: He flew through the middle sector and at the line became the first driver to stop the clocks in less than 75 seconds: 1’14.958.

But there was still one run left, and still the lap times continued to fall. Again the Ferrari drivers opened their laps strongly, but this time Leclerc held the upper hand, and briefly moved into second place.

He was pegged back by the Mercedes drivers who both broke into the 1’14s. But while Verstappen lowered the best time to a 1’14.572, Bottas narrowly fell short: There was just 18 thousandths of a second in it.

Gasly stayed sixth and the McLaren drivers beat Grosjean’s best last effort to claim the fourth row of the grid. Grosjean slipped to ninth ahead of Raikkonen.