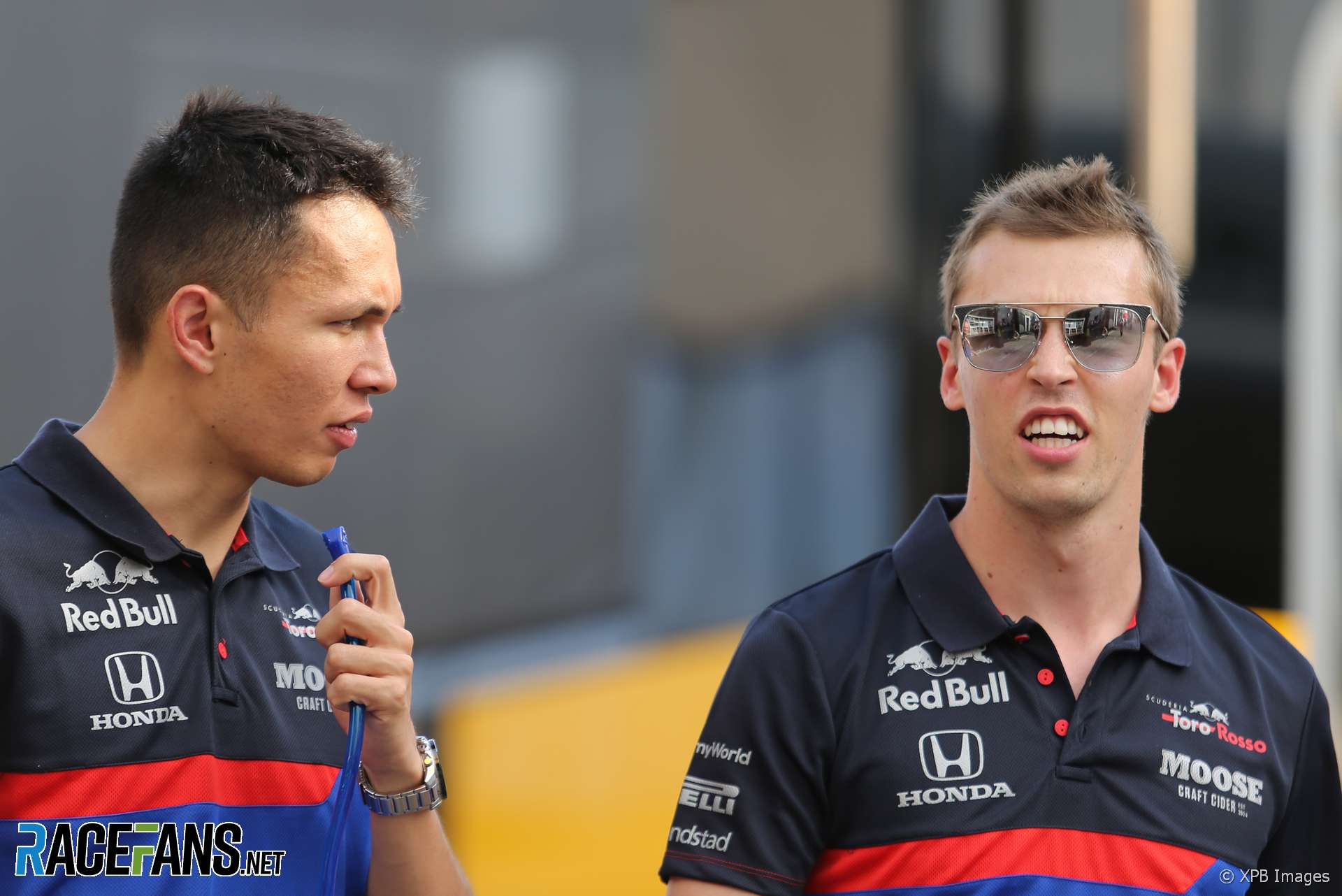 Until the German Grand Prix, no Toro Rosso driver had stood on the podium since Sebastian Vettel’s delirious, improbably victory at Monza in 2008, a result which catapulted him into the top team and on to championship success.

Finally in Hockenheim two weeks ago Daniil Kvyat grabbed his chance to end Toro Rosso’s wait for a podium finish. A brave gamble on slick tyres late in the race yielded a fine third place. It was a redemptive result for the driver who’d endured being dropped first by Red Bull in 2016 and then by Toro Rosso the following season.

And yet, when Red Bull came looking for a short-notice replacement for the drastically under-performing Pierre Gasly, they passed over the experienced and seemingly matured and refined Kvyat in favour of his far less experienced team mate.

Why did Red Bull choose Alexander Albon over Kvyat? Their performances so far this season make an interesting comparison.

Since returning to Toro Rosso, Kvyat has surpassed Jean-Eric Vergne as the longest-serving Toro Rosso driver of all time in terms of races started. But for a driver with aspirations of returning to the top team, he hasn’t been consistently out-performing his much less experienced team mate by the kind of margin he needed to.

Albon had never driven an F1 car until he shook down Toro Rosso’s STR14 at Misano shortly before pre-season testing began. Some errors were therefore to be expected early on and he duly suffered an enormous shunt in China which ruled him out of qualifying. But over the other 11 races, Albon has marginally held the upper hand.

Nor has Kvyat been error-free. The same weekend he tangled with the McLaren drivers at the start, earning himself a penalty.

Kvyat has brought the STR14 home ahead more regularly. But as Albon has gained experience there has been a discernible swing towards the younger driver. This has been most noticeable in the qualifying score line.

In the races, Albon has usually trailed Kvyat. In Hungary he probably would have finished behind his team mate, who muscled past him early on, had Kvyat not fallen into the same strategic trap as Verstappen and suffered when his tyres hit ‘the cliff’ at the end of the race. That would have been Kvyat’s third consecutive finish in front of Albon.

That brings us to the unusual case of Germany. While Kvyat’s result was extraordinary, Albon’s performance was arguably even more impressive, especially for a driver in his first wet F1 race. Albon ran fourth before the Safety Car period where Lance Stroll and Kvyat made their race-deciding early switched to slick tyres. Kvyat had been ninth at the time, and had a lot less to lose than his team mate by gambling. That was the decision that made his race.

Certainly Kvyat deserved the credit and the result. But what Red Bull are looking for is the driver who is the better prospect, not necessarily the one with the larger points total.

Inevitably Kvyat’s result prompted questions as to whether a Red Bull return was on the cards. He didn’t leap at the chance to press his case (“I think this kind of thing is decided by the management of Red Bull”) but said the podium was a vindication of the progress he’s made following a year on the sidelines.

“I think it was important to realise the points that you can improve as a driver and as a person before my comeback to Formula 1,” he said. “Obviously it wasn’t easy to lose the seat in the Formula 1 and at some point it was thought that there was no way back in for me. But since I got the call back in, it was important to come back very prepared and better mentally prepared as well.

“Now all this work is paying off and I’m very happy with how things are working out. I’m happy with the people around me, the team around me, how we work on things. It’s important that now I feel a much better driver than I was in the past. It’s also very important also to back this up with strong results. This year in general has been strong and I think we can continue in this way. I’m really enjoying this, so hopefully we can keep going.”

It’s hard to imagine that, had Kvyat conclusively beaten Albon in a manner which reflected the gulf in experience between the two, Red Bull would have brought him back. In that respect, this has to be considered a missed opportunity.

Equally, while Albon’s performance has been the more impressive given his experience, and individual races such as Hockenheim have been very strong, he hasn’t always looked like a driver deserving of a promotion to a top team. It gives the impression Red Bull concluded Gasly was so far off Verstappen’s they simply had to try an alternative. The question now is whether Albon can thrive in the environment Gasly didn’t.

Kvyat vs Albon: Who finished ahead at each round