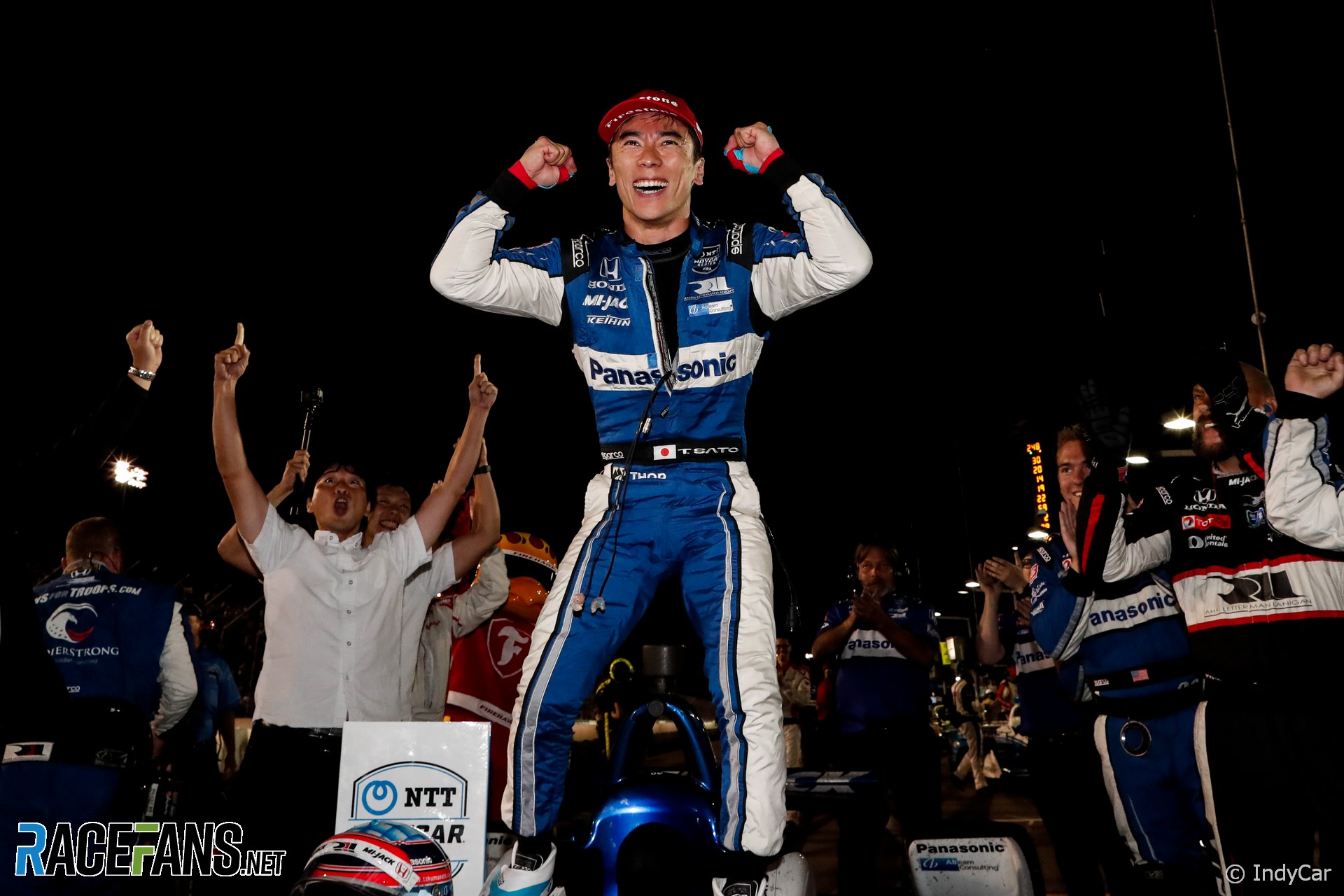 Takuma Sato beat Ed Carpenter in a sprint to the finishing line at Gateway, the pair separated by just four hundredths of a second.

The RLL driver’s path to victory, one week on for being panned by his rivals for triggering a multi-car crash on the first lap in Pocono, was just one of several dramatic storylines which unfolded over the final laps at the Illinois oval.

Sato started the race from fifth place but fell back early on. He lost eight places when an attempt to pass Conor Daly went awry. He ran off-line onto the slippery part of the track which caught several drivers out during the race.

Josef Newgarden led the early running ahead of Will Power and Santino Ferrucci. But the Dale Coyne rookie, who has often impressed with his pace on ovals this year, worked his way into the lead through the mid-race pit stops.

Pocono winner Will Power retired early, sliding into the wall and smashing up the front-right of his Penske. That triggered a caution period during which another of the leading drivers in the championship hit trouble. An engine problem sidelined Scott Dixon, dealing a further blow to his hopes of retaining the title he won last year.

James Hinchcliffe led from Ferrucci when the race restarted, but a few laps later the Coyne driver was through into the lead. Ferrucci led almost 100 laps, but dropped behind his team mate when the pair pitted together, and a slow right-rear tyre change handed Sebastien Bourdais the initiative.

But Bourdais’s race was over just three laps after he pitted. “I just threw it away,” he admitted after spinning into the barrier coming onto the start/finish straight. Daly and Ferrucci were running close behind, and the rookie dodged to the inside of his spinning team mate to pass the Carlin driver as the caution lights came on.

This final caution period handed the lead to Sato, who had pitted early after his setback at the start of the race. Tony Kanaan and Ed Carpenter fell in behind him, while Ferrucci was now pursuing Newgarden.

With Alexander Rossi runnning further down the order, Newgarden had one eye on his points tally, and didn’t fight Ferrucci too hard. The Coyne driver took fourth for him and looked set to take a run at the trio ahead, until he ran wide and lost position to Newgarden again with eight laps to go.

As the laps ticked down Carpenter emerged as a greater threat to Sato’s victory hopes. He passed Kanaan for second place and quickly closed on the RLL driver ahead. Behind them Ferrucci had taken up the charge once more, re-passing Newgarden and bearing down on Kanaan.

The final lap was sheer drama. Carpenter was within touching distance of Sato and got a strong run out of the final corner, pulling alongside his rival. But Sato won the race to the line – by less than a car length.

Meanwhile Kanaan saw off a last-lap bid by Ferrucci to claim third. The Coyne driver lost momentum and again Newgarden closed on him. This time Ferrucci came down onto the line, forcing Newgarden to take evasive action.

The Penske driver spun over the inside of the corner, gathered his car up, but found it had gone into anti-stall. A queue of cars streamed by, including Rossi, though his title rival was a lap behind.

Simon Pagenaud was among those to pass Newgarden, and fifth place made him the leading rival to his team mate in the championship, the pair now separated by 38 points. Rossi is a further 70 behind with races at Portland and the double points finale at Laguna Seca remaining.

11 comments on “Sato resists Carpenter in thrilling finish at Gateway”