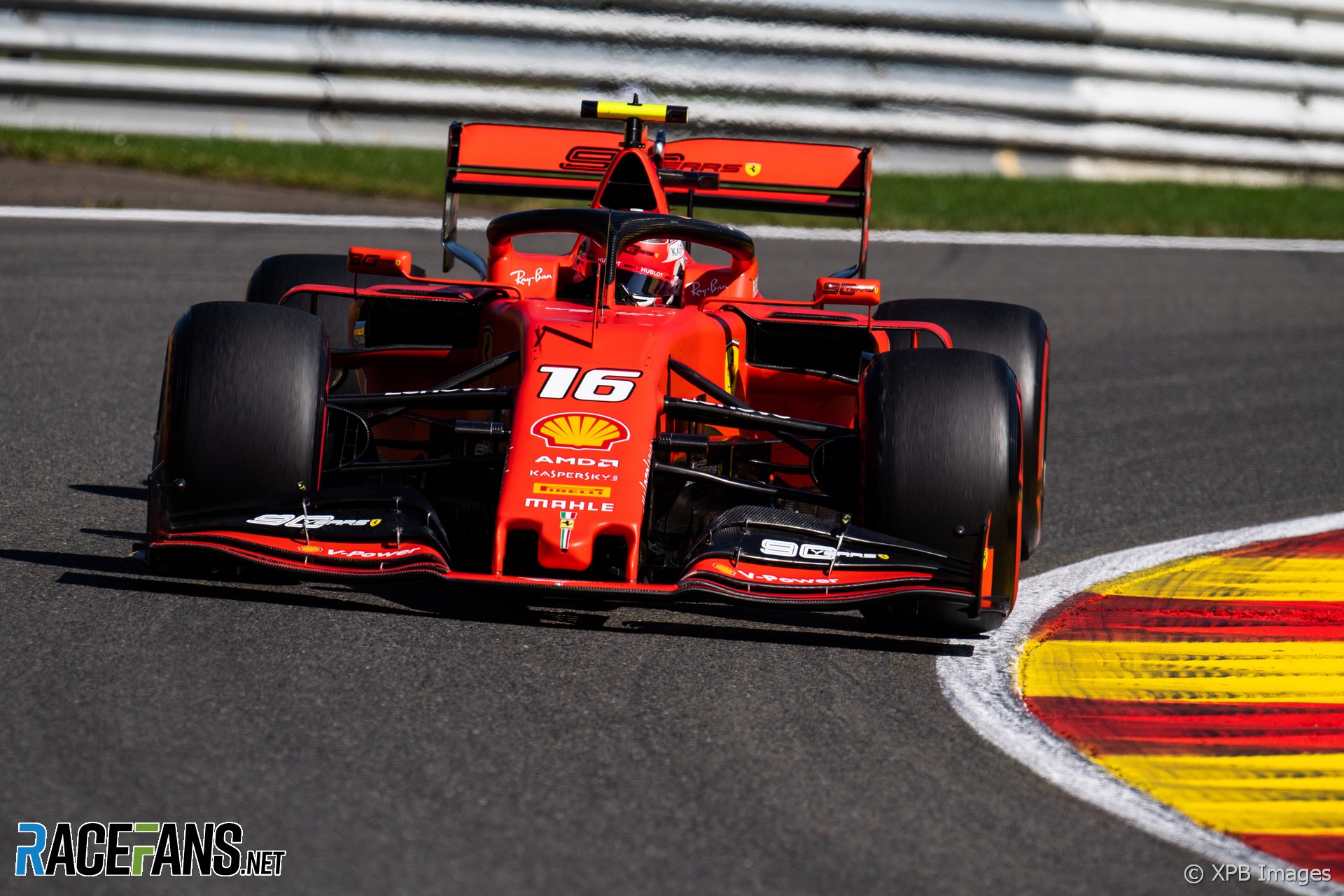 Charles Leclerc led every step of the way in qualifying for the Belgian Grand Prix and ended up over seven tenths of a second ahead of Ferrari team mate Sebastian Vettel.

Williams had lagged well off the pace throughout qualifying so it was hardly unexpected both drivers went out in Q1. Even so the session managed to be a disappointment.

First George Russell had to abort his first run after his dashboard screen went “crazy”, flickering between different displays. Then Robert Kubica’s power unit failed spectacularly as he rounded Blanchimont, the FW42 coming to a smoky stop.

The session was red-flagged before anyone had chance to set a time. When it resumed, with 13 minutes left on the clock, all the remaining drivers joined the track.

The interruption gave Mercedes more time to finish their work on Lewis Hamilton’s car, which had been badly damaged when he crashed in final practice. He easily set a time good enough to reach Q2, but neither of the Mercedes were anywhere near the Ferrari drivers.

Leclerc produced a superb first lap, a 1’43.587, which put him over a second and a half ahead of the quickest Mercedes. Even Vettel couldn’t get close – he was over half a second slower than his team mate.

There was concern at Red Bull when Max Verstappen had to abort his first run after losing power. His final effort secured him third place, a second slower than Leclerc, despite having to pass a queue of cars at the end of the lap.

Moments after that Antonio Giovinazzi parked on the drop towards Eau Rouge having apparently also suffered an engine problem. With less than a minute left on the clock, there was no time left for anyone to improve. That was bad news for the Toro Rosso drivers and Carlos Sainz Jnr, all of which dropped out.

Mercedes revealed their true performance in the second part of qualifying. While Leclerc lowered his benchmark time to a 1’43.376, Hamilton got within two-tenths of a second of him. Vettel improved too, moving closer to his team mate.

With their final runs the Ferraris moved further ahead of the Mercedes again. Leclerc found another four-tenths, breaking the 103-second barrier, while Vettel moved within a tenth of a second of him. That left Hamilton half a second behind.

Neither Albon nor Stroll had any incentive to continue any further. Stroll set the quicker time of the pair, however, which under 2019’s revised rules means he will start ahead of the Red Bull.

Romain Grosjean was inside the top 10 as the final runs began. But Kevin Magnussen, who led the pair out of the pits, improved enough on his final run to grab the final spot in Q3. Lando Norris also dropped out, missing the cut by a tenth of a second.

Nico Hulkenberg joined his team mate in Q3 as well. Ricciardo, Verstappen and Raikkonen all got through, the trio separated by a mere three-hundredths of a second.

Q3 began with almost farcical scenes as drivers tried to find good slipstreaming slots among the traffic while also preparing their tyres for the final qualifying efforts. Hamilton nearly ran into Bottas at one stage as they fell into line.

But the irresistible speed of the Ferraris on the straights proved too much for their rivals to overcome even with a slipstream. Hamilton managed to split them on their first runs, edging Vettel back into third.

Hamilton, however, began his final run between the two red cars and Vettel enjoyed a strong tow from the W10, setting the quickest time through the first sector. Through the middle of the lap Vettel was close to Hamilton and Hamilton not far behind Vettel, and neither enjoyed particularly good runs as a result. While Leclerc got even quicker – setting a 1’42.519 for pole position – Hamilton fell to third behind Vettel, who was almost three-quarters of a second slower than his team mate.

Bottas was little slower than Hamilton in fourth, and Verstappen on his own in fifth. He was followed by the Renault pair, Ricciardo having dodged his way through the Q3 traffic to set his lap. Kimi Raikkonen, Sergio Perez and Kevin Magnussen completed the top 10.