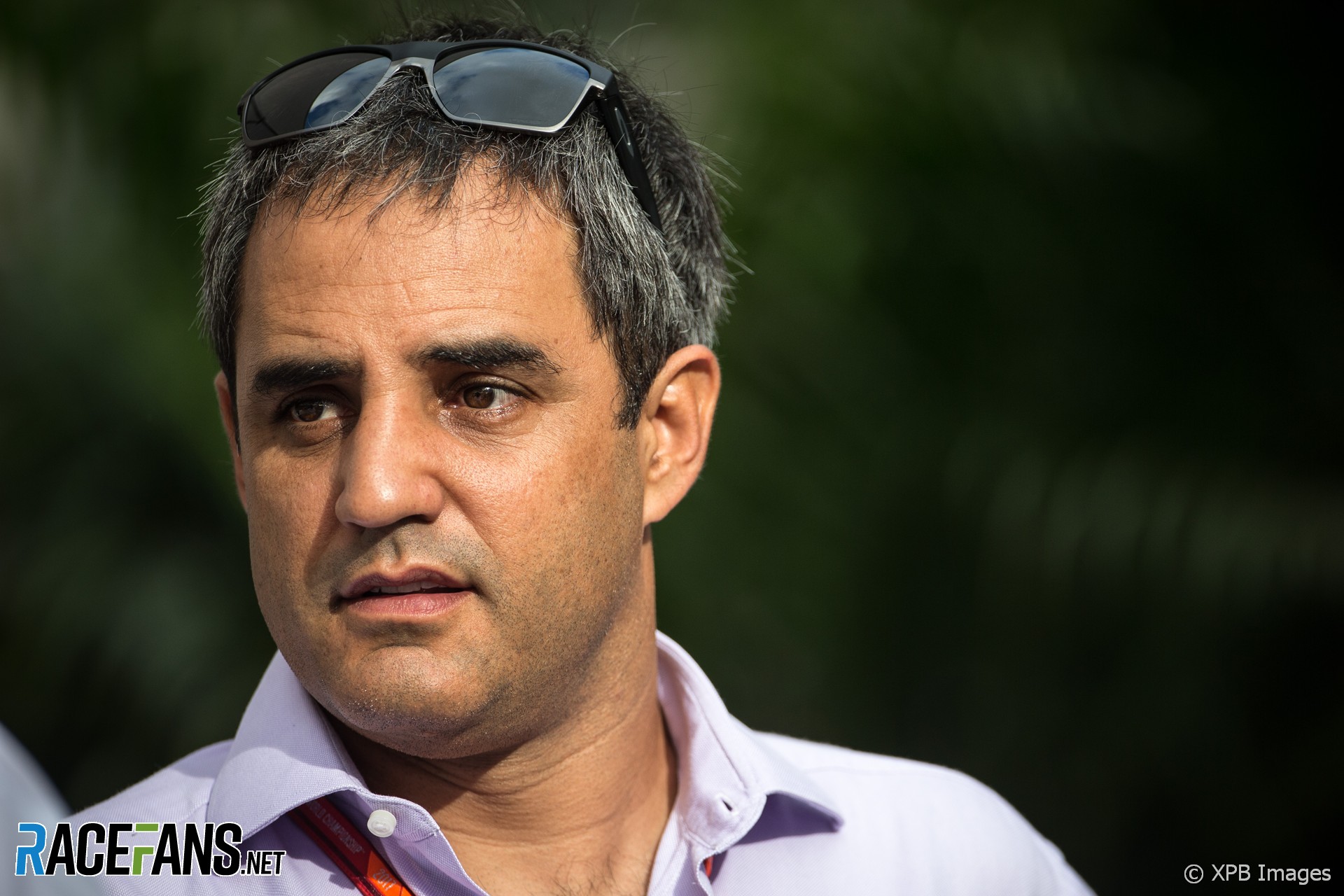 What did Juan Pablo Montoya make of Simon Pagenaud’s claim he’s more likely to win the Triple Crown than Fernando Alonso? @DieterRencken caught up with the ex-F1 racer at Spa-Francorchamps.

My digs are opposite a farmer’s field on which rows of rented tents are pitched, and the camp seems considerably fuller than a year ago, pointing to even better attendance. Of course a single camping village is no scientific measure, but the general vibe seems buzzier than I recall, so it seems we’re in for a bumper crowd this weekend.

Depart for circuit, and, again, I sense more punters walking down rural lanes to the circuit. I’m parked up within 20 minutes, and chat with Juan Pablo Montoya, who has some VIP guest duties this weekend, as we amble to the shuttle.

I mention to him that Indy 500 winner Simon Pagenaud had told me he believes JPM – previous winner of the 500 and Monaco races – has a better chance of bagging motor racing’s Triple Crown than does Fernando Alonso, who needs to win Indy to equal Graham Hill’s feat.

“He’s right,” says JPM. He has form in 24-hour races, having won Daytona 24 Hours thrice. Why not go for Le Mans then?

“I’d like to, but I’d need a winning team willing to put me in a car for one race only as with my US programme I can’t do a full WEC season.”

How about it, Toyota? 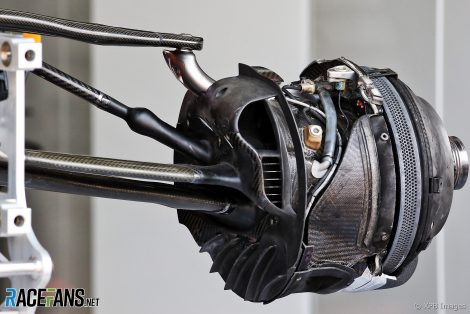 Ferrari’s media hospitality provides breakfast: I grab fruit, yogurt, tea and a couple of freshly baked croissants. Thereafter I start my rounds, and pick up that teams feel increasingly uneasy about the regulatory process, particularly the lack of progress with 2021’s Technical Regulations.

“We have another meeting in London next week [3 September], and unless something tangible happens we can forget about the standard parts they’re talking about,” says a technical director speaking on condition of anonymity.

However, he’s relieved that initial plans to impose penalties for usage of additional brake components – five sets of each was the target – have been scrapped.

“Can you imagine being given five sets of brake discs to run the season; if you go to six, you get a penalty. I mean, I’m in race 15 with a set of brake discs, [and] I need to make a call whether I put them on the car or take a penalty!” he exclaimed. 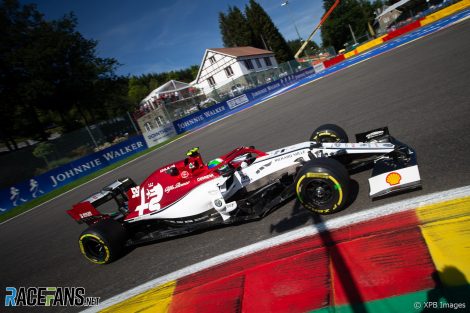 Practice starts. It’s an absolute pleasure to stand on the balcony outside the media centre or inside La Source to watch F1 drivers going about their business on the best overall circuit in the world in the fastest all-round cars on earth. Simply put, I love Spa!

FIA press conference time, and I ask team bosses what conditions they attached to Liberty’s plans to expand the calendar to 22 races after Spain unexpectedly agreed on a return.

Cyril Abiteboul confirms Renault demanded that the season usage limit of MGU-Ks season be increased from two to three, while Toro Rosso’s Franz Tost simply says, “More money!” Guenther Steiner of Haas says, “We kept a low profile and didn’t ask for anything,” while Otmar Szafnauer states Racing Point insisted on reducing the number of pre-season test days to six.

Intriguing how they reacted totally differently to the same request from Liberty.

A second meal at Ferrari, where I’ve agreed to meet a colleague. We’re served a starter of salami and potato salad, followed by pasta with a rage sauce, with fruit salad rounding off a perfect midday filler.

After lunch I spot Kees van de Grint, in my book the best tyre and karting engineer ever, and the man who ensured perfect tyre synergies between car and driver for Michael Schumacher during the Ferrari / Bridgestone years. It’s always a pleasure to chat with Kees and absorb his insights into motorsport over the ages. He is, like me, a massive Matra and Chaparral fan – so we swap yarns about those iconic makes. 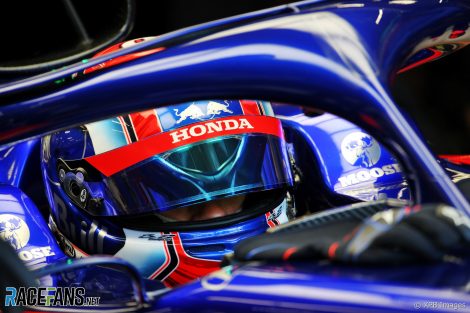 Interviews start, and it’s a busy two hours due to the split-level paddock, with some teams hosting media sessions behind their garages and others in their hospitality units below. I reckon I’ve walked 10kms today, simply bounding up and down steps in the course of duty.

Unusually, Christian Horner hosts an extra Friday media session, clearly aimed at questions about Pierre Gasly’s demotion during the summer break. I ask whether the Frenchman would not have been better prepared had he switched to F1 after winning the GP2 title in 2016 rather than spending a year in Super Formula. Horner ducks that one… 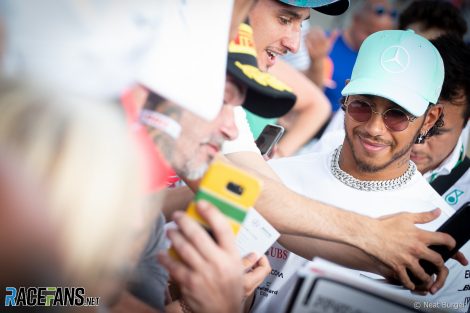 Depart circuit, head for digs, grabbing a couple of skewered pork sticks and fries en route. I catch up on the day’s news while winding down. A quote from Lewis Hamilton on Thursday has hit the headlines as it prompted someone to ask the FIA whether this had all been above board.

Besides “recharging and absorbing the good energy around me” Hamilton referred to having a “bit of a dialogue with the team which we generally don’t usually have during the break”. Mercedes say the FIA is satisfied all was in order.

“Lewis was referring to contact with the team during the week after Hungary, when he had begun his summer break but the team was still working until the following Friday, when our (official) shutdown period began for the mandatory two weeks,” they explain. Storm in a teacup.