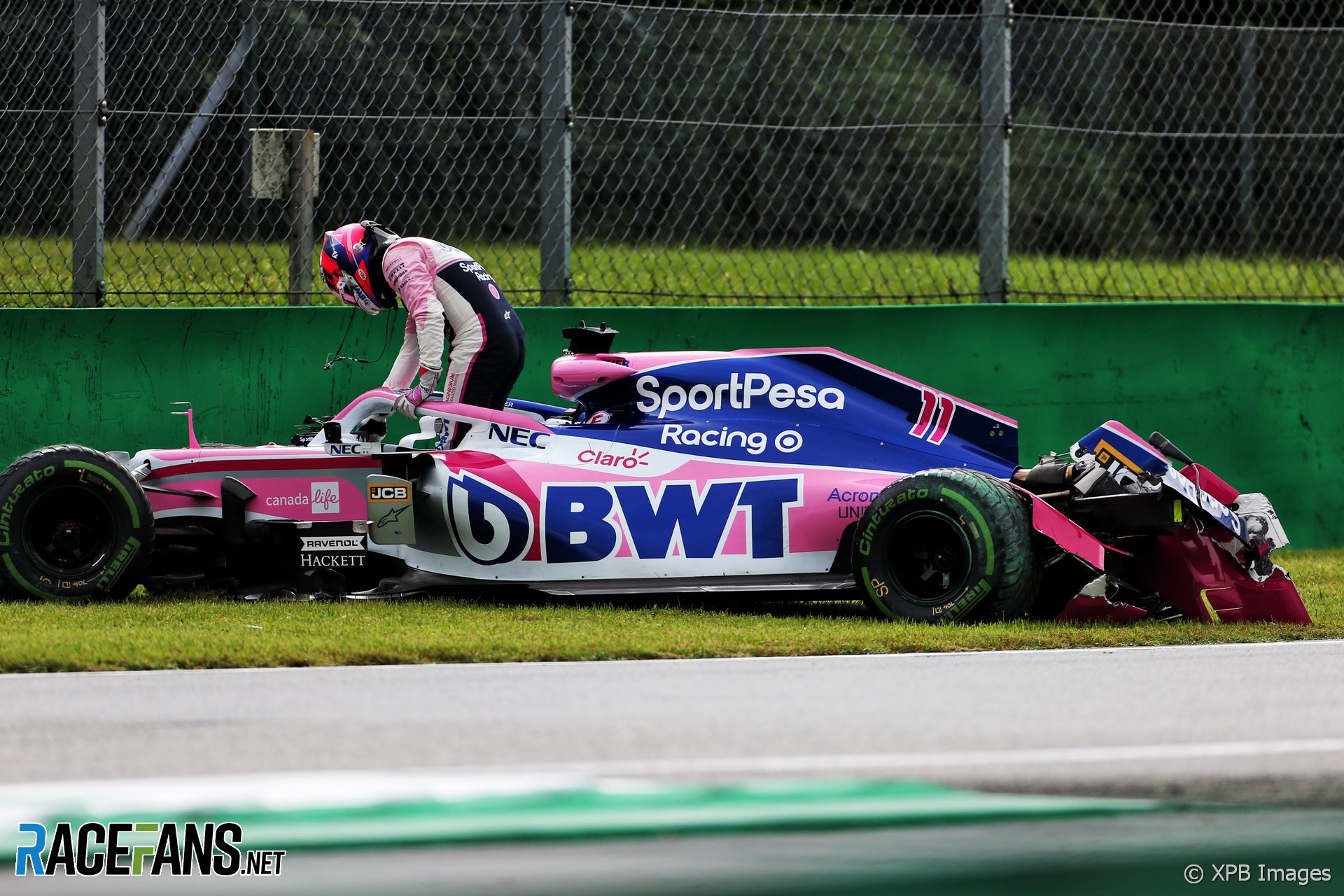 The session began on a track which was wet enough for the first runners to use wet weather tyres, before switching to intermediates. However the conditions caught out several drivers and prompted some complaints about the tyres, notably from Max Verstappen, who described the lack of grip as “insane”.

Kimi Raikkonen was the first driver to hit the barrier. His Alfa Romeo snapped sideways halfway around the Parabolica, and he struck the barrier rear-first. The red flags made their first appearance as Raikkonen climbed from his car.

Around the same time Raikkonen crashed Carlos Sainz Jnr had a 360-degree spin in his McLaren at the exit of Ascari, in full view of Nico Hulkenberg. Sainz managed not to hit anything and returned to the pits.

But soon after the session restarted Sergio Perez lost control of his Racing Point at the same spot and couldn’t keep it out of the barriers. The RP19 sustained front and rear damage in the crash. That brought the red flags out again.

Pierre Gasly proved the third stoppage of the session, but without hitting anything. Driver after driver had already run wide at the Rettifilio chicane, but Gasly managed to swap ends in his Toro Rosso and end up perched on the kerb at the inside of turn two. With limited room to manoeuvre as other cars picked their way around, he took a while to extract himself from the situation, and race control threw a red flag in the meantime. Toro Rosso told Gasly to switch his engine off at one point, but he persevered and brought his car back to the pits.

The track continued to dry during the second half of the session. Bottas set the benchmark intermediate time with a 1’30.596, but in the final minutes a few drivers decided to risk runs on slicks. The Mercedes pair headed the times at this point, but with Lewis Hamilton stuck behind Sebastian Vettel at the end of the session, and Bottas spinning at the Rettifilio, they slipped down the order.

A flurry of fast times from the slick-shod drivers changed the final running order. Daniil Kvyat briefly went quickest, then Sainz moved to the top. The McLaren driver then lowered his best time by more than a second while Lando Norris moved up into third, raising the prospect of a rare Mclaren one-two.

Those hopes were dashed by Leclerc, who after taking a while to bring his medium compound tyres in, produced the quickest time of the session with his last lap.