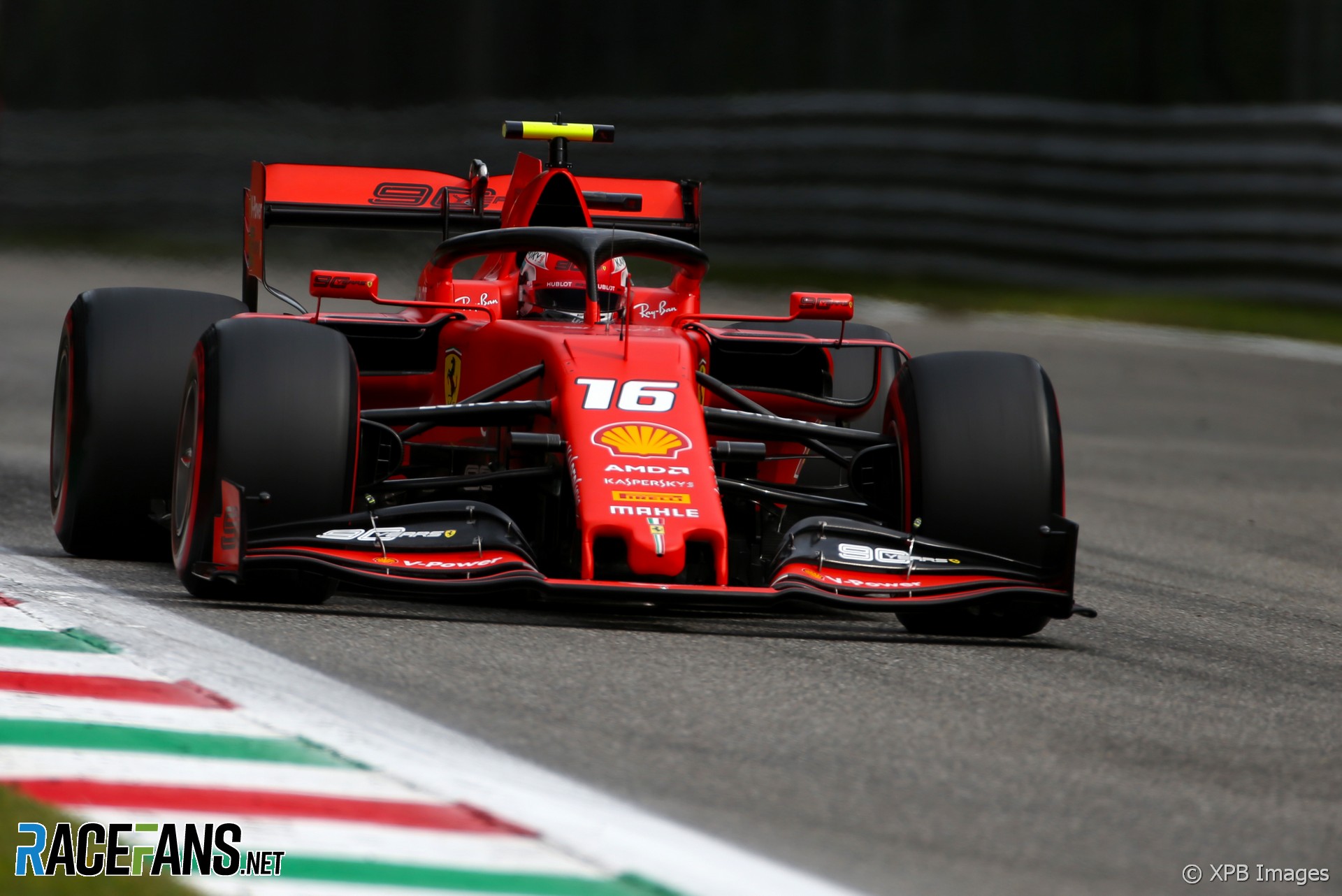 Charles Leclerc will start the Italian Grand Prix from pole position after a farcical conclusion to qualifying at Monza.

Almost all the drivers in Q3 failed to start their final laps in time after the queue behind each other trying to get a slipstream.

Ferrari were the only team to chance the harder medium compound rubber in Q1. Charles Leclerc set the quickest time on his tyres initially, deposing Nico Hulkenberg from the top of the times, Renault having begun the session strongly.

The Mercedes drivers couldn’t beat Hulkenberg to begin with despite running the soft tyres. Valtteri Bottas fell short by just a thousandth of a second after putting a wheel wide at the Variante della Roggia.

Sebastian Vettel, however, could only manage sixth fastest on his set of mediums. The team asked if he could make it through on the harder rubber, and though he offered to try, he was sent out on for his final run on a set of softs.

He didn’t need to improve his time in the end, as few other drivers bettered their times. Sergio Perez’s car came to a stop in the Curva Grande, which triggered a red flag, and left just four minutes for the final runs. While Pierre Gasly and Lance Stroll took advantage of good slipstreams to set a fastest sector time each and grab a spot in Q2, Romain Grosjean slipped out in 16th.

He was joined by Perez and Max Verstappen. The latter was always going to start from the back anyway due to his penalty, but when he went out for a single run he reported a loss of power from his Honda engine at the exit of the Rettifilio chicane. The Williams pair inevitably dropped out too.

It was soft tyres all round for the drivers in the second part of qualifying. Leclerc led the way again, with Vettel not far behind, but Hamilton splitting the pair of them. Then the Mercedes driver found more time with his last effort and ended the session on top, though by less than a tenth of a second.

The field joined the track as one for their final runs, Alexander Albon leading the queue. The Red Bull driver cemented his place in the final 10, as did the Renault pair, with Daniel Ricciardo impressing again in fourth.

Daniil Kvyat was 10th before the last runs and told his team he needed to find a tow for his final run. It didn’t work out, and he was eliminated in 13th. “What a mess,” he said afterwards.

McLaren did manage to work the slipstream to their advantage, however. Lando Norris was already doomed to start from the back because of his penalty, so he gave Carlos Sainz Jnr a tow down to the Rettifilio, which helped his team mate go through in seventh.

Lance Stroll grabbed his first place in Q3 this year. Kimi Raikkonen also made it through, though at the expense of his team mate, by just two-thousandths of a second.

Before qualifying began the drivers had been advised the stewards would monitor their driving on the out-laps closely and that the minimum Safety Car time would be used as a reference to ensure no one drove too slowly, in an attempt to get a slipstream.

This lead to some odd manoeuvres at the start of Q3. Vettel led the field out of the pits but immediately went straight on at the chicane. He came back out still ahead, but behind him Albon warned some drivers were using the chicane escape route to fall further behind into the queue.

Vettel ran wide at the final corner, but his lap time stood, though it was quickly beaten. Leclerc took a tenth of a second out of him in the first sector and led the times, but the Mercedes were close.

Hamilton got within 39 thousandths of the Ferrari despite Raikkonen spinning off immediately in front of him in the middle of the Parabolica. Bottas, running behind them, crossed the line but initially didn’t register a time. It was subsequently reinstated, putting him third.

Raikkonen was unhurt in what was his second crash at Parabolica this weekend. The session quickly resumed once the scene was cleared, but the crowds saw little more in the way of action.

The remaining nine cars joined the track together and began swapping positions, circulating steadily. Suddenly the teams seemed to realise how close they were to not reaching the start/finish line in time to start their final laps and the drivers pressed on.

But as they reached the start/finish area it became clear most of them wouldn’t make it. Sainz got to the line in time, followed closely by Leclerc, but the Ferrari driver abandoned his effort early into the lap. None of the remaining drivers made it across the line in time, which cemented Leclerc’s pole position.

115 comments on ““What a mess”: Leclerc on pole after farcical end to qualifying”