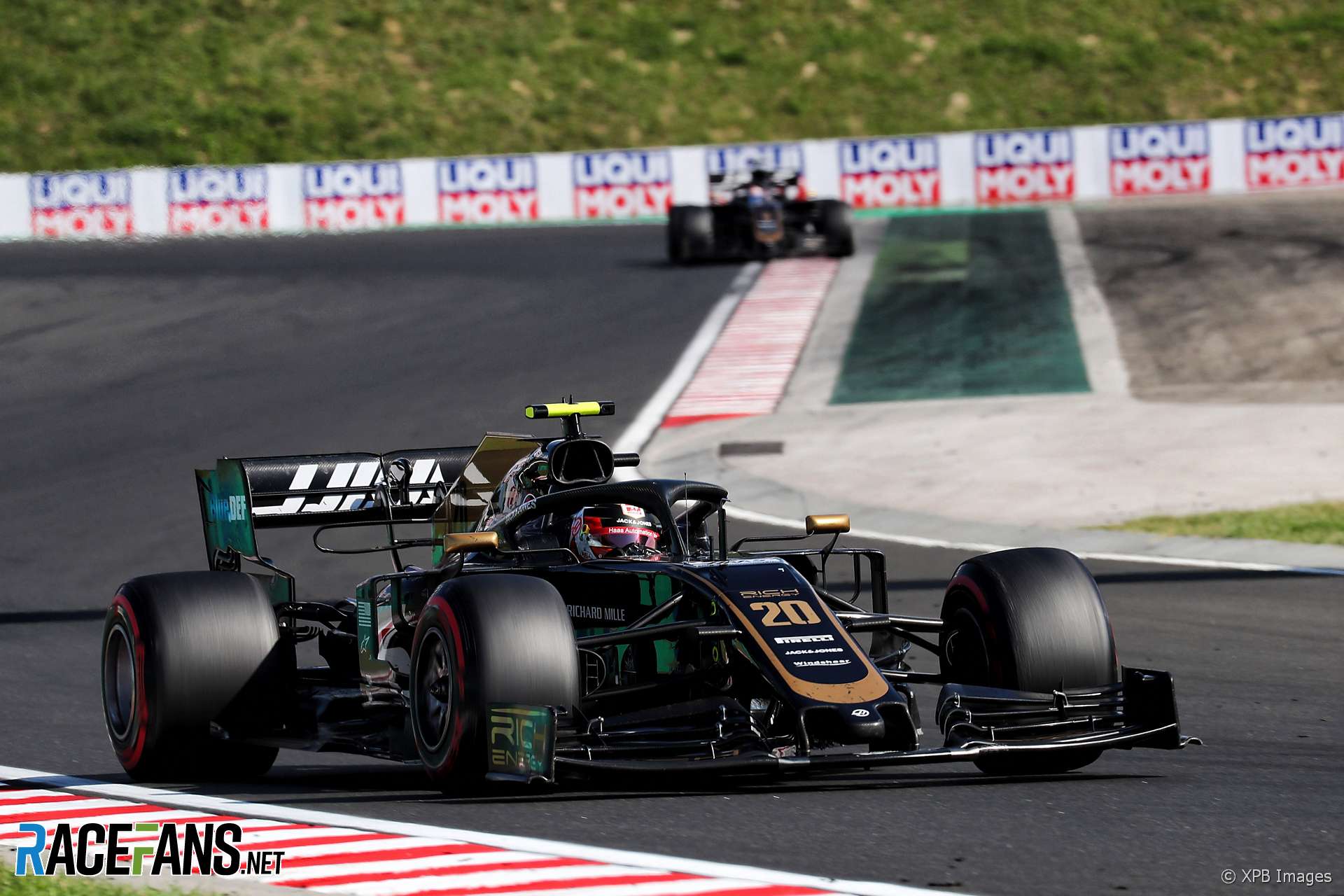 In the round-up: After testing its current and original-spec VF-19 back-to-back, Haas team principal Guenther Steiner says the team intends to race a ‘hybrid’ of the two:

Romain Grosjean tested the original car for three races while Kevin Magnussen continued to drive the new version, but Steiner said the pair will use the same specification for the rest of the year:

We left the door open but it will be almost a hybrid. It won’t be completely the old car coming back, it will be a hybrid. What we found out with that car, how it is working aerodynamically, we can introduce some of those parts on this car for Sochi. That is the status and the car stays the same now.

But if one does it the other one does it. It will not be a comparison any more. We got that one figured out.

We gathered the whole team for the ultimate group photo. 📸👌#FearlesslyForward 🧡 pic.twitter.com/wC6VOYcsDv

End of 2 testing days with MercedesGP such a great feeling to be back in the car after 10months of wait !
But sorry boys caution in 2020 won’t happen 🤷🏻‍♂️😋! #EO31 pic.twitter.com/4r2SCCldC0

Here's @alo_oficial shaking down the Toyota Hilux he's racing in the Lichtenburg 400, round five of the South African Cross Country Series, which starts today. pic.twitter.com/rjb6Y4u1pq

"The RBAT design encompasses the cockpit with a ballistic Aeroscreen anchored by titanium framework. The design will consist of a polycarbonate laminated screen that includes an anti-reflective coating on the interior of the screen, an anti-fogging device through an integral heating element and possibly tear-offs, all of which will be produced by integrated third-party companies. There also will be a cockpit cooling option that will be designed by Dallara in conjunction with Red Bull Advanced Technologies."

"Antonio Felix da Costa says that one of the reasons why he chose to move away from BMW was to get more freedom in his career as a professional racing driver."

"Created by Red Bull founder Dietrich Mateschitz, a home to an impressive collection of aircraft and racing cars, for two days Hangar-7 will host the best 51 competitors from the online series representing 18 different countries. They will compete against each other in the FIA-certified Gran Turismo Championships, fighting for individual glory in the Nations Cup as well as teaming up in the Manufacturer Series."

"We believe the hybrid engine and fuel technologies can play a big role, a leading role, in the addressing the issue of carbon emissions. We believe the solution will be a path of many rather than one cure-all."

The next chapter (The Checkered Flag)

Daniel Ricciardo: "I’d say (Red Bull) releases more expression. That’s how they differ. It’s more ‘freestyle’ with a lot of events and activities, while Renault is quite structured with, ‘we have to do this now at this time’. It’s just the nature of what the brands represent."

Teams are considering whether to test changes to the race format during the 2020 F1 season but @Dbradock doesn’t believe it’s needed:

The fact that Ross Brawn is even entertaining this sort of “spice up the show” is really disappointing. I’d have thought he’d be above the sort of gimmicky stuff that Liberty seems hell bent on bringing in.

Soon we’ll be seeing the drivers compete in a pushbike race or a swim leg or have to pair with a celebrity driver because for some reason Liberty thinks it has to have a “show”.

They used to call it the F1 circus back in the early 80’s but now they’re actually trying to turn it in to one.
DB-C90 (@Dbradock)