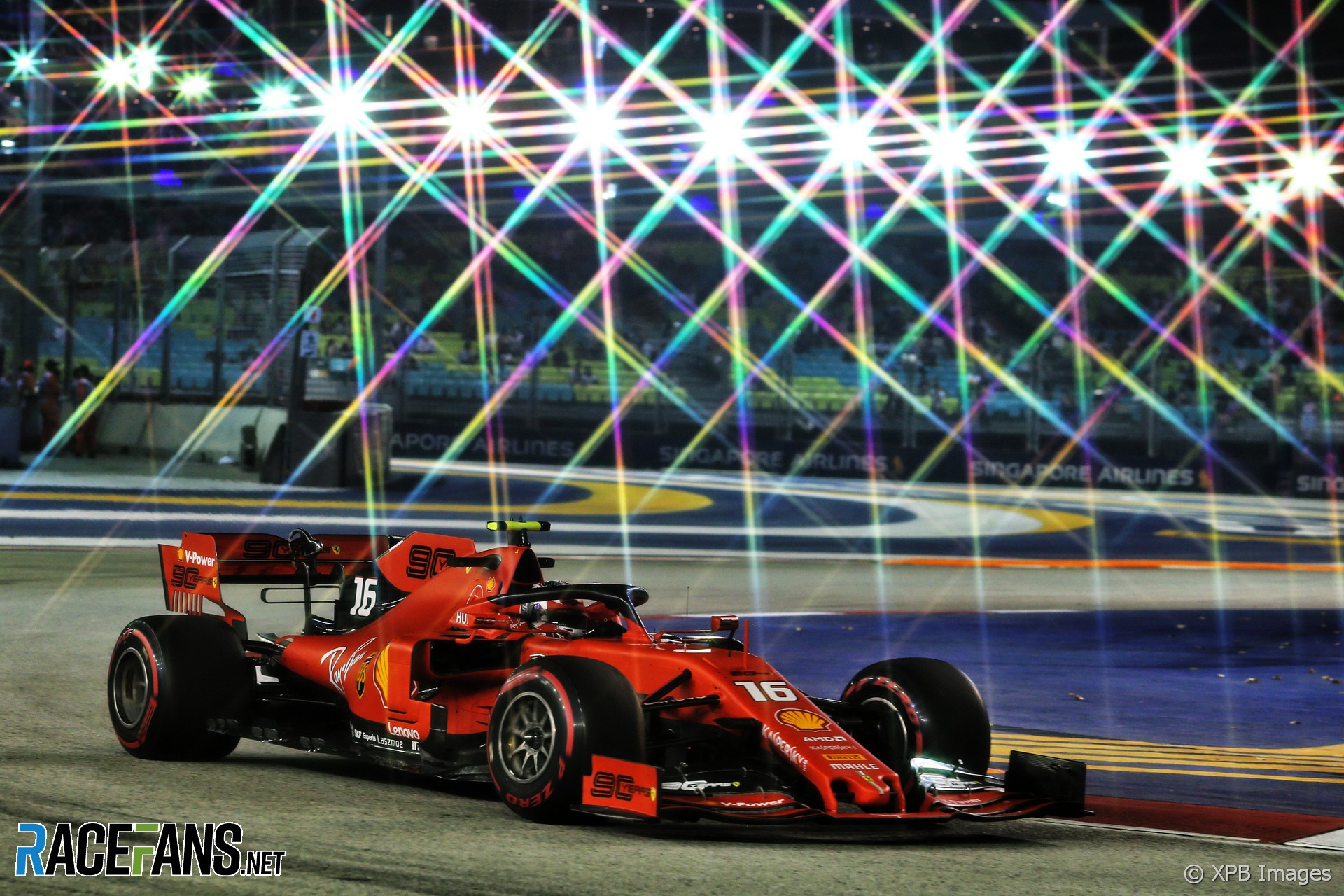 Charles Leclerc took pole position for the Singapore Grand Prix away from his team mate Sebastian Vettel with the final lap of qualifying.

Vettel aborted his final run in Q3 which let Lewis Hamilton in to bump him off the front row to third position. He will share the second row of the grid with Max Verstappen.

At first it seemed Mercedes had rediscovered the advantage they had at the end of practice yesterday. They ran soft tyres at the beginning of Q1, which allowed Leclerc to out-pacve them on softs.

But when Hamilton and Valtteri Bottas took to the track on softs later in Q1 and moved to the top of the times it seemed normal service had been resumed.

Behind them the contest to escape the drop zone was as close as ever. Williams’s George Russell had shown good pace in practice but hopes he might finally get one of their cars into Q2 were dashed. He apologised to the team on his way into the pits.

Lance Stroll dropped out in Q1 once again after a late improvement from his team mate Sergio Perez. Kevin Magnussen narrowly scraped into Q2 as well, leaving Romain Grosjean behind in the other Haas.

The second phase of qualifying was a straightforward affair. The Mercedes, Ferraris and Red Bulls easily claimed their places in Q3 with their soft tyre tyres. McLaren and Renault bagged the next four places on their first runs.

That left Sergio Perez, Antonio Giovinazzi, Pierre Gasly, Kimi Raikkonen and Kevin Magnussen in the drop zone ahead of the final runs. None of them were able to find enough time to grab a place in the top 10.

Perez incurred a five-place grid penalty for a gearbox change during practice, which means his 11th place will go to Giovinazzi.

Leclerc lost time picking his way past the McLaren drivers during his out-lap at the beginning of Q3. The Mercedes drivers also had compromised out-laps, and as a result the three drivers all delivered sub-par first efforts.

Vettel, meanwhile, had a strip of track to himself and delivered a peach of a lap. A 1’36.437 put him on provisional pole position, and to begin with only his team mate could get within a second of him.

His final effort, however, was unsuccessful. Vettel aborted his run, leaving him vulnerable to his rivals. Leclerc was the first to take advantage. With the benefit of a clean out-lap he beat Vettel’s time by two tenths of a second.

The Mercedes, surprisingly, couldn’t match the pace of the revitalised Ferraris. But a superb run through the final sector, where he’s been quick all weekend, edged Hamilton ahead of Vettel to claim a front row spot alongside Leclerc.

Verstappen also fell short, over half a second behind in fourth place. Bottas and Albon were well down on their team mates, and will share the third row of the grid.

Sainz was the only one of the McLaren drivers to beat the Renaults. Following his strong showing in Q2, Norris slipped to 10th on the grid.