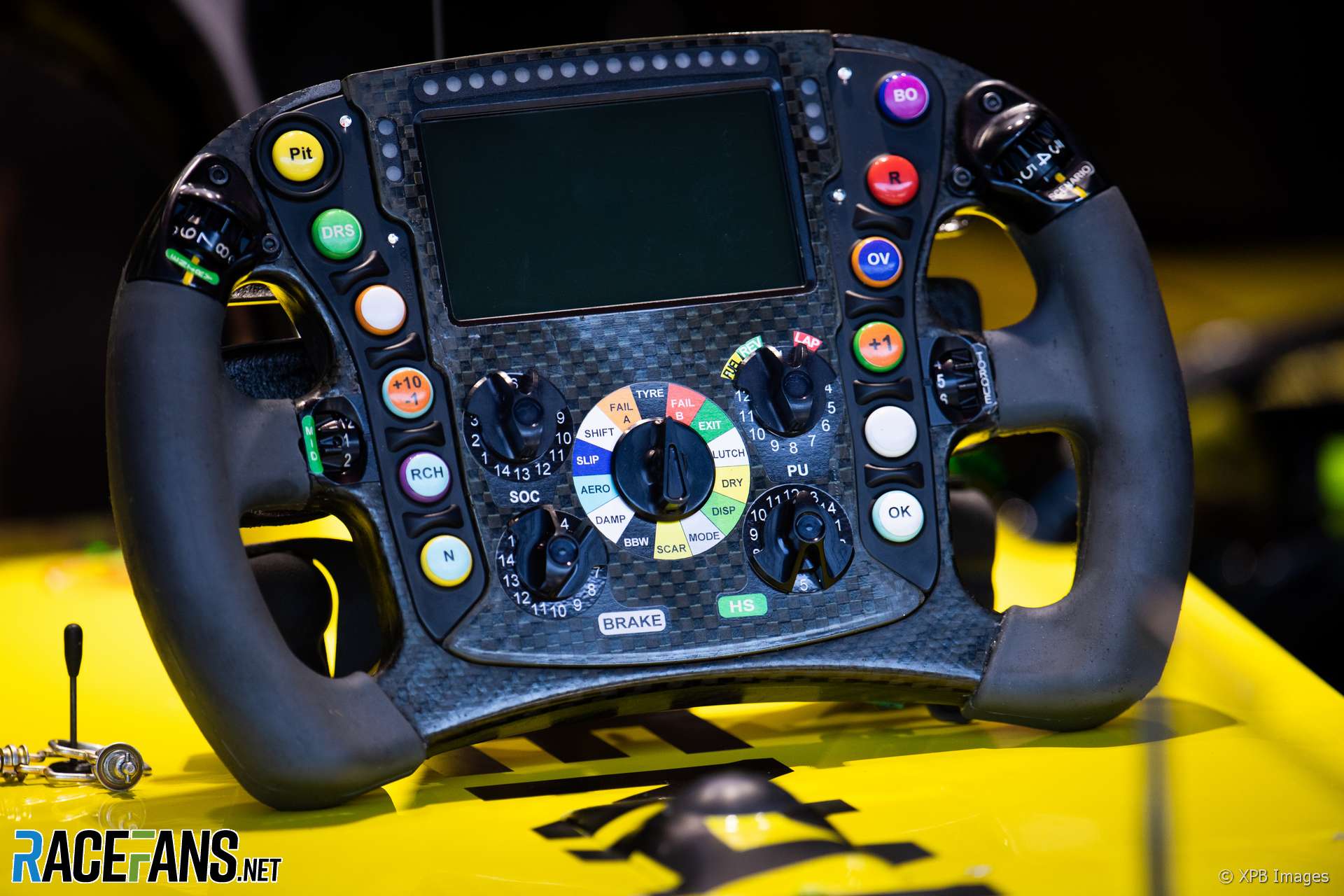 The FIA is to begin an examination of hardware, software and data from Renault’s Formula 1 car following a protest from Racing Point over the legality of their braking system.

The stewards formally accepted Racing Point’s protest is admissible. The process of examining the contested parts of Renault’s car will now begin.

Racing Point alleges the team’s two cars include a “pre-set lap distance-dependent brake bias adjustment system”. This is forbidden by article 11.1.4 of the technical regulations which states “any change to, or modulation of, the brake system… may not be pre-set”.

The FIA technical department’s representative has been ordered to conduct an examination of the steering wheels and electronic control units from Daniel Ricciardo and Nico Hulkenberg’s cars. Those parts are to be sealed and impounded.

The representative has also been empowered to bring in any outside assistance which the investigation may require, including communication with representatives of Racing Point and Renault.

The stewards have requested a written report from the FIA’s representative including an assessment of whether their findings indicates the regulations have been broken, and to indicate when that will take place.

In the meantime, the stewards have issued a final race classification but noted Renault’s finishing positions of sixth (Ricciardo) and 10th (Hulkenberg) is “provisional subject to the outcome of any decision concerning the protest”.

In a statement, Renault said it “acknowledges the protest lodged by Racing Point concerning its brake bias system following the Japanese Grand Prix. Team representatives have met with the stewards of the event at Suzuka, but due to the complexity of the 12-page dossier prepared by Racing Point, a further meeting will take place at a future date, to be defined.

“Renault intends to use this recess to prepare an equally detailed case to rigorously defend its position. The results of the Japanese Grand Prix still stand at the current time.”

Having received a protest from SportPesa Racing Point F1 Team against the Renault F1 Team concerning an alleged pre-set lap distance-dependent brake bias adjustment system on cars 3 and 27, the Stewards summoned and heard from the team representatives of both teams and a representative of the FIA Technical Department. The Stewards determined that the protest met all requirements specified in Article 13 of the International Sporting Code and is, therefore, admissible. This point was agreed to by the team representatives of the Renault F1 Team.

The FIA Technical Department representative was directed to seal and impound the FIA standard electronic control units and steering wheels of cars 3 and 27 in preparation for conducting a detailed analysis of those pieces. The representative is further directed to conduct a detailed analysis of the hardware, software, and data associated with them and, when complete, provide a written report to the Stewards with their findings, to include an assessment that matches those findings against the potential technical infringements detailed in the protest.

The representative is authorised in the name of the Stewards to call upon such outside technical assistance, including representatives of the Renault F1 and SportPesa Racing Point F1 Teams, in the conduct of their assessment. When the likely submission date of the assessment can be determined, the FIA Technical Department representative will communicate that to the Chairman of the Stewards so that the next meeting time to assess the claims made in the protest can be scheduled.