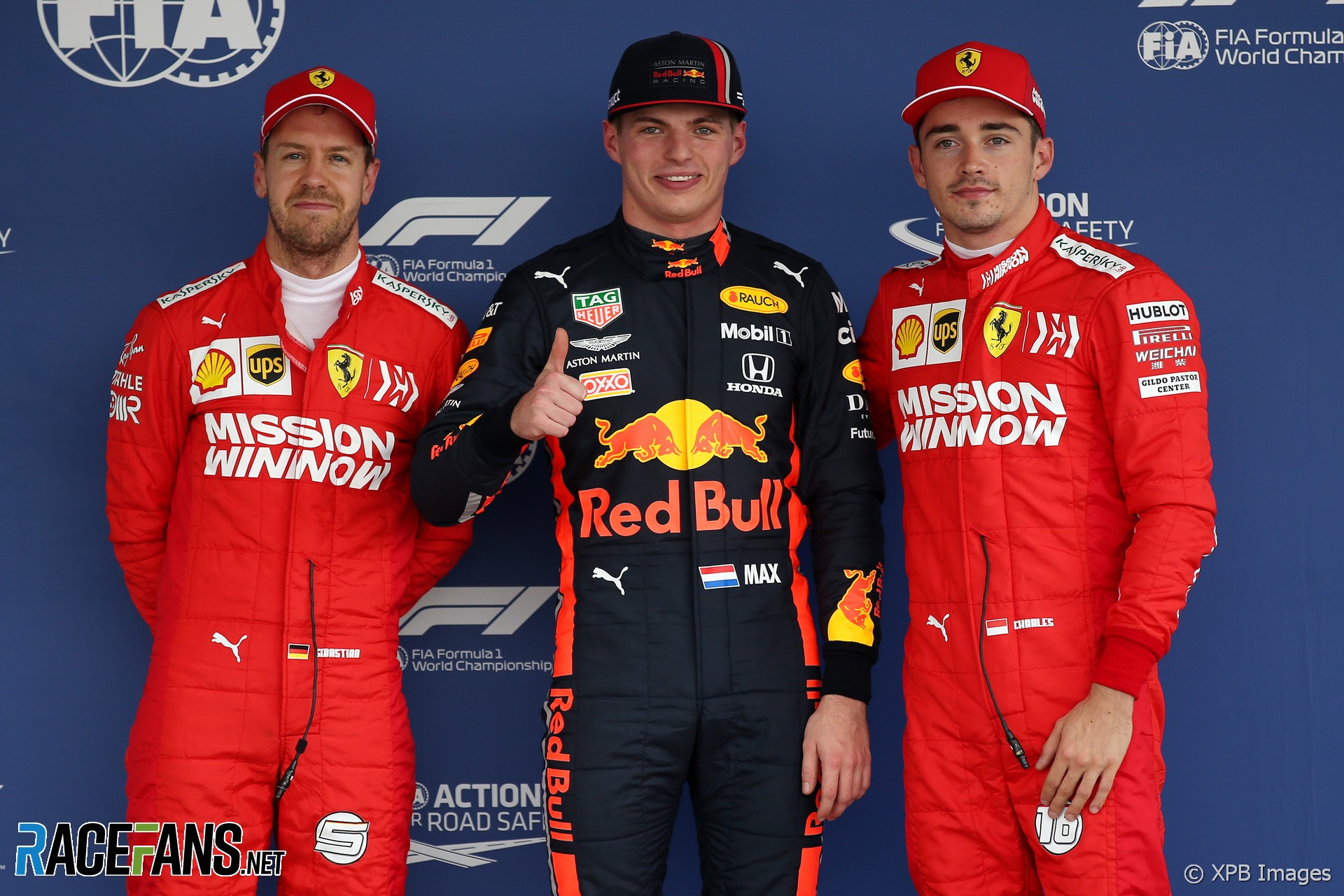 The Red Bull driver leads the Ferrari pair on the grid for tomorrow’s race at the Autodromo Hermanos Rodriguez.

Red Bull showed strong pace from the off, moving ahead of Mercedes and Ferrari to set the top time in Q1, Max Verstappen leading the way on a 1’15.949.

At the other end of the times there were few surprises. Neither Williams made the cut, though George Russell briefly got ahead of Romain Grosjean until the final runs.

The Haas pair also struggled. Kevin Magnussen found inconsistent performance from his tyres between runs, while Romain Grosjean started the session with a spin at turn one.

Grosjean was extremely unhappy with his car’s balance, and made two major changes to his set-up between his three runs. “It’s fucking understeering like hell in places,” he complained, before dropping out in 18th place.

The final driver to drop out was Lance Stroll, who missed the cut by 0.271 seconds, complaining of a lack of grip.

Vettel led the way from Verstappen, followed by Leclerc and the Mercedes drivers. Lewis Hamilton was behind team mate Valtteri Bottas. “The car just wasn’t great for that tyre,” he said. “I almost feel like a prep lap is needed.”

While Ferrari and Red Bull used their final Q2 runs for sighter laps on soft tyres for the Q3 shoot-out, the Mercedes drivers chose to run on mediums again, and moved up to the top two places.

The Toro Rosso pair and Carlos Sainz Jnr attempted to make it into Q3 on mediums as well. However none were quick enough to make the cut with their first runs, and resorted to softs for their final runs.

None succumbed to the pressure of nailing their lap first time, and all three made it into Q3. Lando Norris joined his team mate, meaning five pairs of cars went into the top 10 shoot-out.

They left behind Sergio Perez, who like his team mate in Q1 was the last driver eliminated, and the Alfa Romeo and Renault pair. “I don’t think we could find that extra time today,” admitted Nico Hulkenberg’s race engineer after he went out in 12th, the quicker of the team’s two drivers.

The Ferraris retained their usual advantage, storming down the long straights through the first sector of the Autodromo Hermanos Rodriguez on their first runs in Q3. Vettel was supreme here, pulling over a quarter of a second over Verstappen on his first effort.

But the Red Bull driver took all that back and more over the rest of the lap. Fastest in the final two sectors, he reversed that deficit to Vettel at the line. Leclerc also had a better run through the rest of the lap than his team mate and joined Verstappen on the front row of the grid.

Vettel had made a mistake on his first run and was hopeful he could make a bid for the front row of the grid. But running second-to-last in the Q3 queue – ahead of Verstappen – left him vulnerable in the event of a problem ahead.

To begin with it looked promising for Vettel. He picked up time at the start of his lap, though Verstappen was also quick. Leclerc went off at turn 11, ruining his chance of improving.

But then Bottas skidded into the barrier at turn 16. He continued along the length of the barrier into the TecPro section at turn 17, which brought his damaged W10 to a sudden stop. He was able to get out, but the red flags flew and with no time to resume the session, Verstappen’s pole position was sealed.

Bottas qualified sixth, though it remains to be seen if the repair work to his car will lead to any penalties which could change his starting position. Hamilton, who could seal the championship on Saturday, qualified fourth, narrowly ahead of Alexander Albon.

The McLaren pair claimed row four ahead of the Toro Rossos.