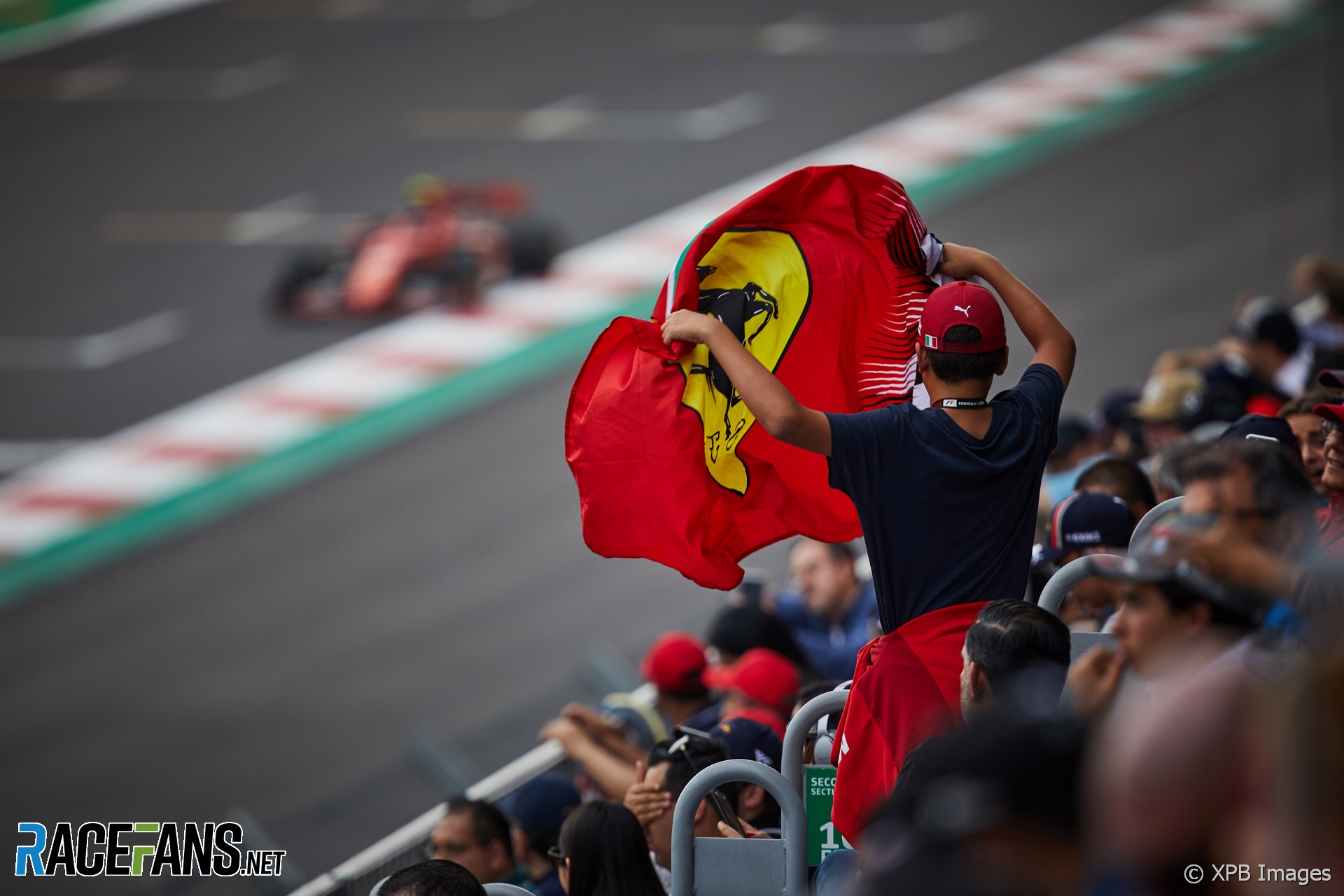 The winner of the 2019 Mexican Grand Prix may well be decided in a pre-race discussion in the Ferrari motorhome.

Not that they’re necessarily going to choose which of their drivers gets to win. But as we saw in Sochi, their tactics for the start of the race will have a huge effect on its outcome.

Max Verstappen’s qualifying penalty has handed Ferrari a front-row lock-out. But a lot can happen between the starting grid and turn one, some 900 metres away.

Charles Leclerc, who inherited pole position for the race from Verstappen, spelled out the importance of keeping his lead at the start.

“The one who would be first in after turn three will have a huge advantage,” he said. “First of all, because you have got free air, which is the same on every track.

“But here I think there is a big thing which is the cooling and then being behind you need to straight away start to do some lift off and things like this is going to be a big factor.”

At Sochi, where there is also a very long run to the first braking zone and Ferrari qualified first and third, the team made a pre-race arrangement with its drivers as to how it would handle the start. The exact details have never been fully disclosed, but from the team’s post-race quotes and in-race radio communications, it appears to have been as follows.

Leclerc, who was on pole in Russia, would help Sebastian Vettel, who started third, by giving him the benefit of his slipstream. However if by doing that Vettel took the lead off him, Leclerc would be given the lead back, providing the team believed the pair made roughly similar starts. In other words, if Ferrari felt Vettel got ahead by making a better start rather than by using Leclerc’s slipstream, Vettel would be allowed to stay ahead.

As the team’s radio communications showed, after Vettel passed Leclerc at the start both drivers were told their “start performance was the same” and therefore Vettel would have to let Leclerc by again. Of course he didn’t, but that’s another story.

Will Ferrari attempt similar tactics in Mexico? The crucial difference is, of course, that their drivers do not have another car between them. Their greater concern will surely be avoiding a repeat of their poor starts at Suzuka two weeks ago.

Even if they don’t get away particularly well, the sheer grunt of the Ferraris should help them stay ahead, allowing them to form a kind of ‘rolling roadblock’ to keep their rivals behind.

Any attempt to do much more than that would be fraught with unnecessary complexity, the like of which Sochi surely demonstrated they don’t need. But, as Leclerc admitted on Thursday, whatever the Ferrari engineers cook up, the drivers will go along with. Whatever they choose, the team will be anxious to avoid failing to convert pole position into victory for the third race in a row.

The loss of Verstappen’s Red Bull from pole position will make Ferrari’s life a lot easier. But he could still be a serious threat, especially if he is able to find a way past Lewis Hamilton on lap one. The Red Bull is usually good on its tyres, was very strong at this track last year, and the team is usually aggressive with its strategy – more so than Mercedes, who couldn’t engineer a way to get Hamilton past Vettel last time out, and were outfoxed by Ferrari in Singapore.

If Verstappen and the Ferraris occupy the top three places, Hamilton will have to wait at least another week for his sixth championship. However if he finishes on the podium, Valtteri Bottas’s result will determine whether the title is decided. Mercedes have not yet confirmed whether Bottas will have to take a grid penalty following the repair work to his damaged car, but indicated they are “90%” confident he won’t.

The four slowest drivers in Q3 – the McLaren and Toro Rosso pair – are likely to find themselves at a considerable strategic disadvantage owing to F1’s Q2 tyre rule. They will have to start on old soft tyres and, as last year’s race showed, are likely to be the only cars on the softest rubber at the start of the race. We could see a lot of pace management from them – that was how Leclerc bagged seventh place for Sauber last year, after a monotonous race of near-constant reminders to look after his tyres.

There is a slim chance the weather could play a role in the proceedings. The race starts at 1:10pm local time and some forecasts indicate a rising chance of rain from 3pm, with a strong possibility of storms after 4pm. If that arrives any sooner, we could see a wet end to the race.

Will Ferrari claim their first Mexican Grand Prix win since 1990? Can Verstappen reclaim the initiative after losing pole position?

And will Hamilton put a lock on the title today? Share your views on the Mexican Grand Prix in the comments.

6 comments on “Can Ferrari get back to winning ways after sixth pole in a row?”