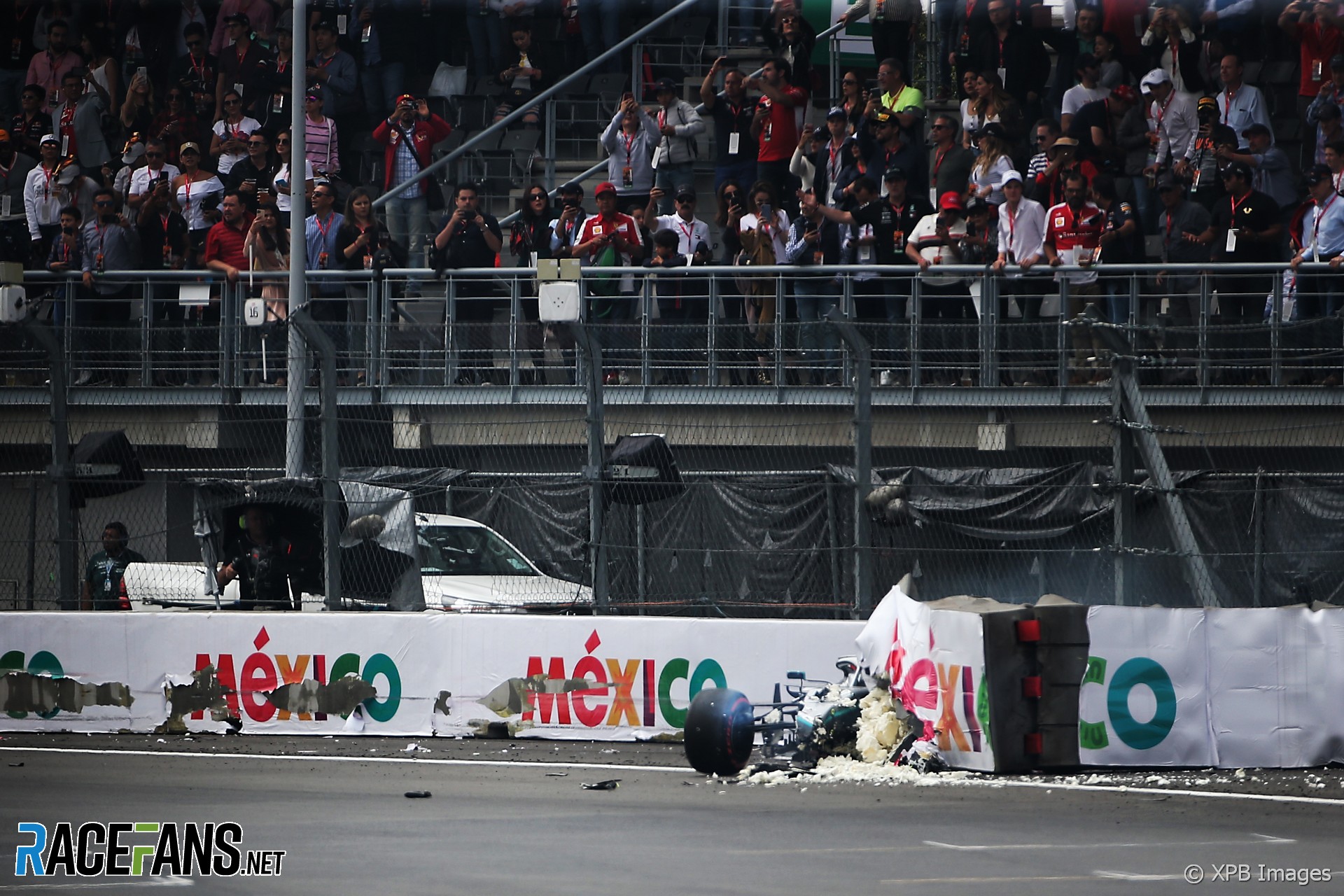 In the round-up: Valtteri Bottas says the barrier he hit at the end of qualifying needs to be changed.

Bottas hit the wall at the exit of turn 16, then had a heavier impact with the start of a barrier further around the corner. He was asked whether the TecPro barrier should be adjusted:

Definitely I think we should try and avoid those kind of those kind of TecPro things – I’m sure it’s a good thing but how it starts, maybe it should start way a lot earlier or much later.

I don’t know, but it’s not ideal. You know, [I’d} be all fine and in no pain at all if we had could continued the wall like it was. For sure we’ll bring it up.

The stewards have ruled they will take no further action over the incident between @danielricciardo and @kvyatofficial. "[Ricciardo] did not have to take avoiding action, both drivers agreed that the situation was not significant." #F1 #MexicoGP #MexicanGP

The FIA have been telling some sections of the media that Verstappen will now be investigated as a result of his comments in the press conference.

Honestly, what a shambles. How hard can it be to have a coherent chain of communication?

Son goes to bed thinking some one is on pole, will wake up realising someone else is instead. F1 needs to sort this out.

He's going to be gutted when Verstappen gets a penalty and he ends up 'relegated' to pole…https://t.co/b7YhG3xY3A #F1 #MexicoGP #MexicanGP

One thing is certain in F1: Any incident, involving any driver or any car, at any circuit in any year, will prompt a bunch of people to scream WELL WHAT ABOUT LEWIS regardless of the facts surrounding it.

Helmut Marko doesn't like the look of F1's new cars for 2021, which he describes as an 'IndyCar' formula.

"No big surprise to me about this qualifying performance, I saw it coming, but that still doesn’t make it right. At this level of altitude, we just don’t carry enough downforce to let us do a decent run – nothing new."

Lewis to start from P3 in Mexico (Mercedes)

"Being half a second off pole is not great but nor is it something we can easily explain. There’s no particular corner that we are struggling with, it just looks like our tyres are not quite ready at the start of the lap and that they are done by the final sector."

"I am very disappointed. We had looked competitive, but we were quicker in final practice on a damp track than in qualifying, so we need to look into what happened and understand where we missed out."

"It’s not been an easy day though as I haven’t been feeling great, but I’ll rest up tonight and feel as good as I can tomorrow. It’s going to be tricky to start on the Softer compound with Sergio right behind us on presumably the Prime, but we still have a chance to score some points tomorrow."

Pirelli don’t like F1’s new AWS-sponsored ‘tyre wear’ graphics – and neither does Neil:

I strongly disliked that graphic the second I saw it – over-simplified, most likely misleading and not something I want to see on my screen during a race. Hope it goes the way of mini-sectors, and I also hope the slightly less annoying, but still misleading ‘pit window open’ graphic joins it (‘pit window open’ implies, to a casual viewer, that there’s a mandated period of time in which drivers can stop).

Actually, i hope they dump most of the AWS stuff. The ‘projected time until driver catches opponent’ isn’t so bad, so I really don’t care if it stays or not… but I don’t think it’s accurate (especially the ‘overtake difficulty’ bar) and it can’t predict future lap times/traffic/tyre drop-off, so what’s the point it in being there? And I don’t strongly hate the pit stop gap projection, but I’d rather just watch the race myself, and retain some suspense, rather than have a computer whack a great big spoiler across the bottom of the screen.

They’ve done some great graphic stuff (integrating the info over the halo in onboard shots, for example – love that) but the AWS stuff just isn’t for me.
Neil (@Neilosjames)

16 comments on “Bottas calls for barrier change after crash”