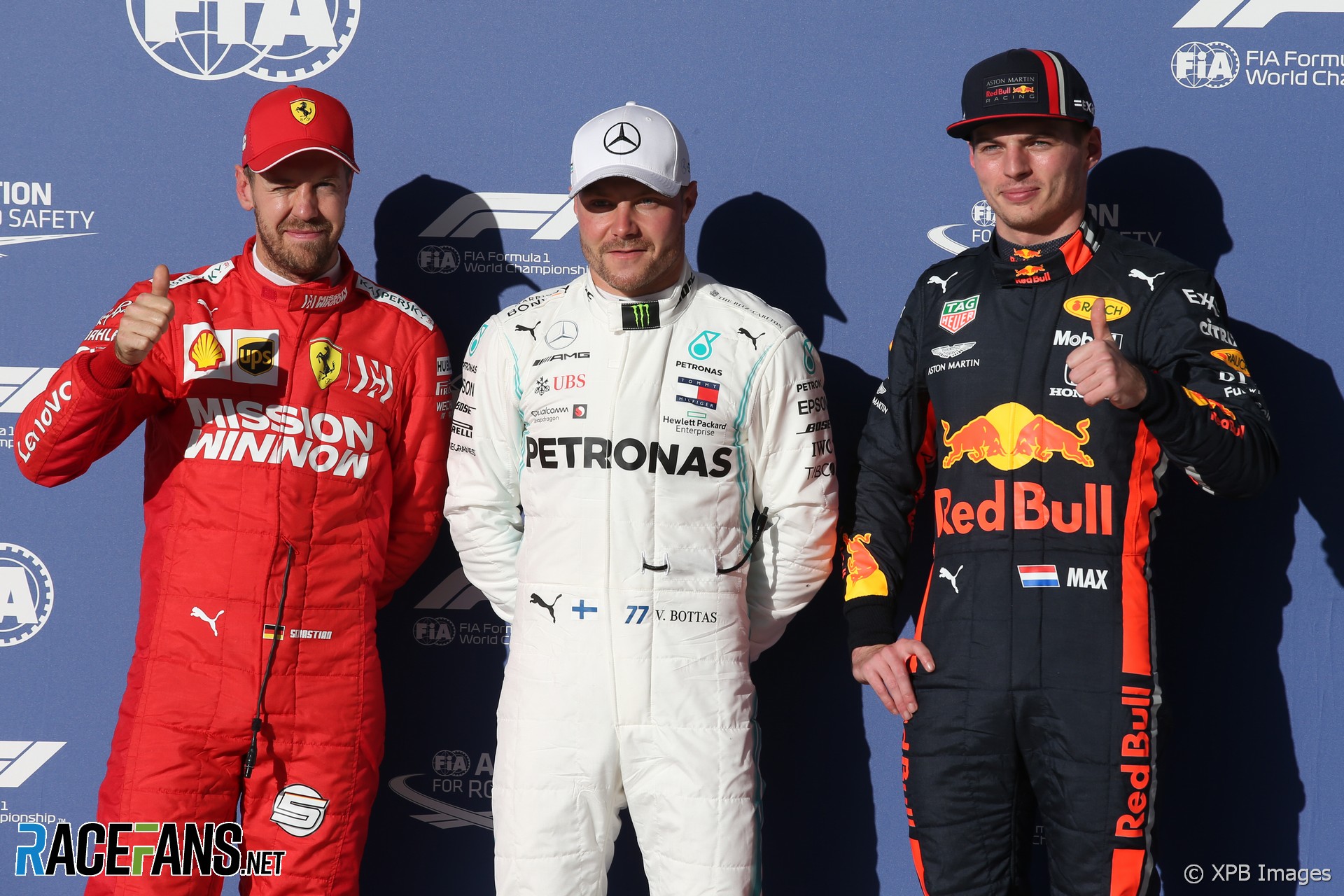 The Mercedes pair were competitive throughout the qualifying session, but in a closely-fought Q3 the two silver cars were separated by two Ferraris and a Red Bull.

Sebastian Vettel came within 0.012 seconds of extending Ferrari’s run of pole positions, and Max Verstappen was also less than a tenth of a second away from taking pole position.

The track was improving throughout the session, however, and with his final run Lando Norris surprisingly leapt to the top of the times with a 1’33.353.

Pierre Gasly also made a significant late improvement, and he needed it, vaulting from 17th to fourth place. That pushed Antonio Giovinazzi into the drop zone along with his Alfa Romeo team mate Kimi Raikkonen.

The Williams pair failed to progress as usual. George Russell took advantage of the opportunity to get ahead of Sergio Perez, though the Racing Point driver will start from the pit lane anyway following his penalty for missing the weigh bridge. His team mate Lance Stroll comfortably made it into Q2.

Mercedes and Ferrari favoured the medium tyres for the start of the race, and selected it to qualify on in Q2. So did Verstappen, and the five were covered by just 0.153 seconds after their runs, Hamilton the quickest of the lot. Alexander Albon set the best time of all, but he opted to run the softs, which put him 0.147s ahead of Hamilton.

Kevin Magnussen was narrowly inside the top 10 after the first runs, leading Daniil Kvyat by just a hundredth of a second, with Daniel Ricciardo close behind. He wasn’t able to improve with his final run, and lost out to several of his rivals.

Nico Hulkenberg beat his time, as did Kvyat, though the Toro Rosso driver had his lap time deleted for running wide at turn 19. He had also been involved in a confusing incident before he started his lap when both Hamilton and Verstappen tried to pass him, and Verstappen had to go off the circuit.

Gasly made it through to Q3 irrespective of Kvyat’s lap time deletion, even though he aborted his final lap after a poor first sector. Ricciardo joined him in the final 10 but Nico Hulkenberg failed to make the cut, ending up two-tenths off his team mate.

Hamilton was the first of the front-runners to set a lap in Q3, and it wasn’t his best. He was slightly hesitant turning the W10 into the first corner, and around the rest of the lap he seemed not as sharp as usual. A succession of rivals relegated him down the order.

“How much am I down?” he asked. “Currently fifth, Valtteri P1, three tenths ahead,” he was advised. The pair were also separated by the two Ferraris – Vettel just a hundredth of Bottas, who in turn has Verstappen between them. Alexander Albon slotted in fifth ahead of the McLarens and Gasly, whose car was destabilised by a strong gust of wind on his lap.

The scene was set for a fine scrap for pole position – but it failed to materialise. None of the front-running drivers improved their positions, and only Verstappen and Leclerc set quicker times. Verstappen’s effort, despite a lock-up at the first corner, left him less than seven-hundredths of a second off Bottas in pole position.

Vettel was just a hundredth of a second away from beating Bottas to pole. “I lost a bit on turn one and then maybe tried a bit too hard in the middle section,” he told his team on the radio. “I asked a bit too much from the rear.”

Hamilton had to settle for fifth on the grid behind Leclerc, and alongside Albon, whose final lap time was deleted for a track limits violation. The McLaren pair claimed the fourth row, Sainz comfortably ahead of Norris, and followed by Ricciardo and Gasly.