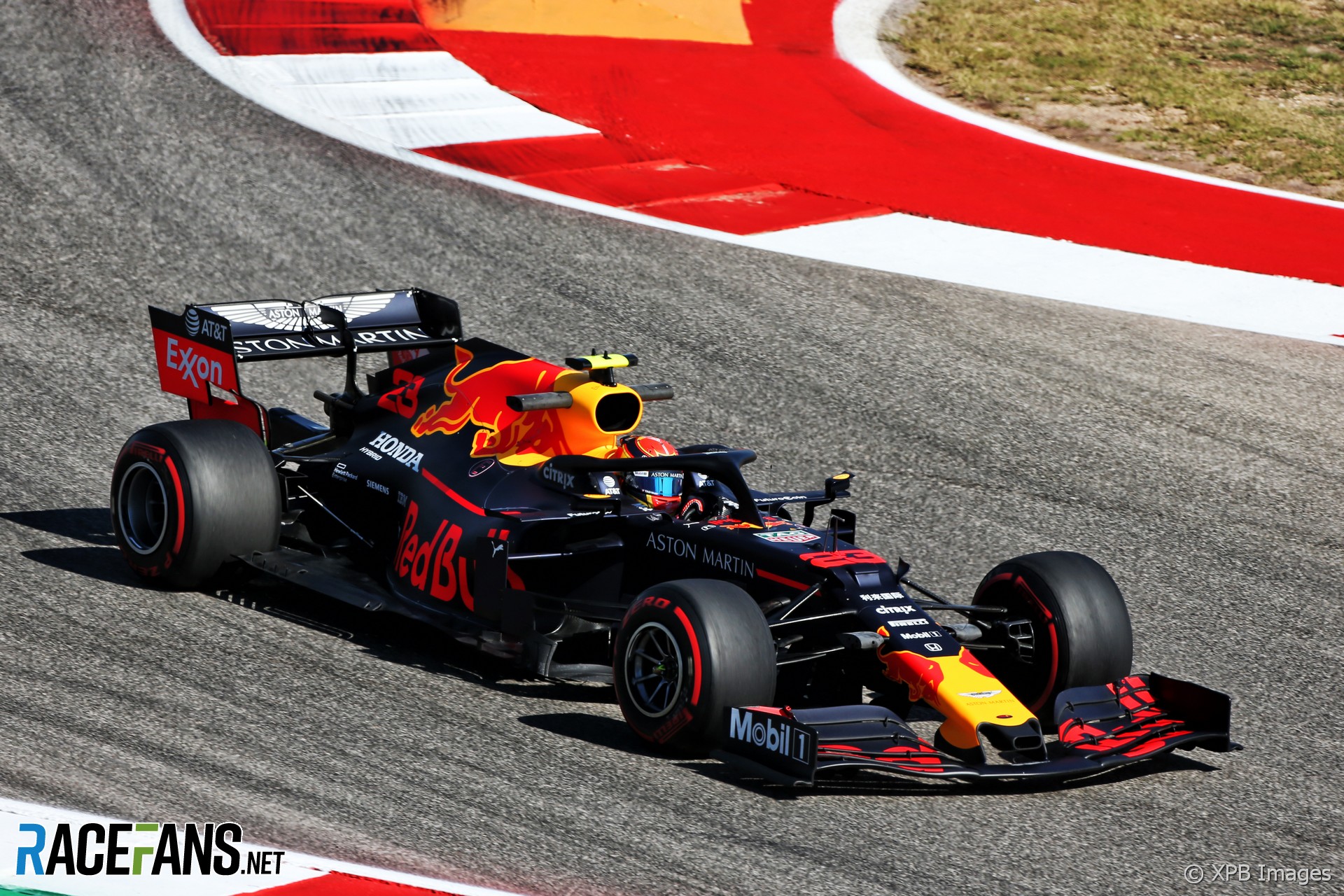 In the round-up: Alexander Albon says consistent performances and improvement are more important to his Red Bull future than bagging a “big result”.

Albon was asked if he needs a “big result” before the end of the year to justify a full-time driver at Red Bull for the 2020 F1 season.

I don’t think I’m trying to look for this big result. I think it’s just consistency and improving.

It’s a shame I didn’t do my lap in quali [his best time was deleted for a track limits violation] because it would have been a pretty good lap. But that’s how it goes.

I think trying to put myself in a position where I need to score, have a big race or anything, I’m not looking at it like that.

Pirelli has been keeping a lid on what types of 2020 tyres teams were using during FP1. Below are the tyres that 🇨🇦 Lance Stroll and teammate Sergio Perez used during their FP1 on Friday. Note how they are not colour coded #F1 #USGP pic.twitter.com/V40083GRek

Your top three drivers to start the race tomorrow.

Top four drivers were within a tenth of each other in qualifying so the race is bound to be mega. #F1 #USGP pic.twitter.com/pDTr6VaSHF

Or how about put a gravel trap there?#F1 #USGP pic.twitter.com/foCVR8lLje

Great answer from Vettel to some tedious question about a soccer game:

"We aren't playing football, we are racing here. Is it that boring to watch? You have no question about what we actually do? I think there's rain forecast in China tomorrow, want me to comment on that?"#F1

"Red Bull asked the FIA to clarify how the fuel flow rate is measured, a question which is believed to be aimed at how Ferrari is operating its hybrid engine to extract high levels of power."

"I made a mistake braking into turn 12, locked a wheel and that cost me at least three tenths, which would have placed me four or five places higher and into Q2."

Seb so close to pole (Ferrari)

Mattia Binotto: "The lack of running meant (Leclerc) had no time to get a good understanding of the car following the set-up changes we had made to it overnight. I am sure he would have done a much better job with more track time."

James Allison: "I think (Hamilton) would be the first to say that was a bit of a messy couple of laps in Q3."

Work to do after difficult Saturday in Austin (Racing Point)

Lance Stroll: "Q1 went well, but in Q2 I locked up into Turn 1 and that really put me on the back foot for the rest of the lap, which is a shame. I would have liked to be in the top ten and I think that’s where we deserved to be given our overall performance across all the sessions."

Daniel Ricciardo: "We’ve had a difficult few weeks in qualifying where I haven’t been too happy with myself, but today was much better and I extracted more or less everything from the car."

Robert Kubica should just blame Williams for his lack of opportunities to race other cars this year, says Ben:

Just take last race as an example, I think the qualifying gap between him and his team mate was nearly 1.5 seconds. In Q1 there was a smaller gap than this between first and 10th.

Say he was in a car in the midfield, with pace this poor. There was just under 1.5 second between Perez in 11th and Russell in 19th. If Kubica was in a midfield car, he would likely still most often qualify right at the back. And I really do think that if he was in a top car, a good deal of the midfield drivers would very often beat him.
Ben Rowe (@thegianthogweed)