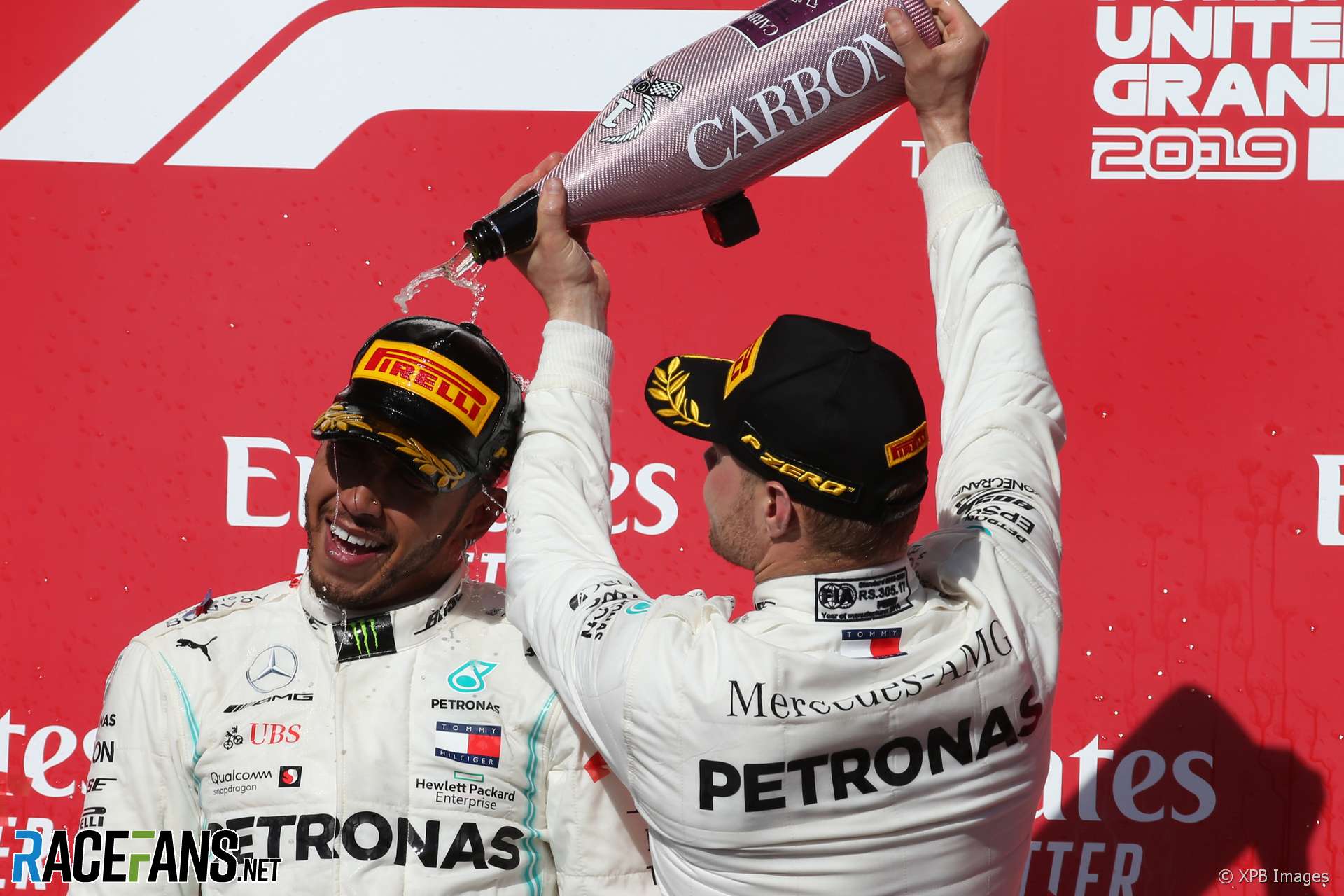 Valtteri Bottas produced one of the best race weekend performances of his F1 career at Circuit of the Americas.

But his fully deserved pole position and win were eclipsed by his team mate.

Although Bottas was able to overtake Lewis Hamilton in the final laps of the race to win – a feat few drivers can claim to have done – it wasn’t enough to stop his team mate securing his sixth world championship title.

Ferrari fall out of the fight

Hamilton’s weekend had gone well until Q3, where Bottas parked his car on pole and put three of their rivals between himself and Hamilton. With less than seven-hundredths of a second covering three different cars at the sharpp end, the grid promised a close race.

There was even the outside chance Bottas would find a way to keep the title fight going. He was on pole, eyeing a potential victory, whereas Hamilton lined up a season-worst fifth and potentially vulnerable to a first-corner lunge.

But within half a lap Hamilton was ahead of both Ferraris and up to third. Charles Leclerc got off the line sluggishly and Sebastian Vettel had armfuls of understeer on his first run through the S-bends at the start of the lap. Improbably, Hamilton drove around the outside of the struggling number five Ferrari at turn eight.

Leclerc dived past his team mate at turn 11, but this allowed Vettel a run back at him into the next corner. Leclerc squeezed Vettel tight to the apex of the corner, forcing him onto the kerb. Vettel, perhaps remembering how badly his first lap went at this track 12 months ago, backed out.

But he Ferrari was unfathomably lacking grip. He locked a wheel at turn 15 and Lando Norris pounced on him instantly. As lap two began Daniel Ricciardo took him into turn one. He continued to lose over a second to the race leaders until lap eight, when his right-rear suspension suddenly gave way at turn nine.

A new kerb had been installed at turn eight overnight and Ferrari, suspecting Vettel may have hit it, warned Leclerc to steer clear. But after the race Vettel denied he’d touched it, and suggested the failure gave a clue as to why his car had handled so badly from the off.

Leclerc spent the opening stint sat in fourth watching the rear wing of Hamilton’s car ahead of him getting smaller. What had happened to the team which had set pole position for all of the last six races?

Inevitably paddock mutterings surrounded the issuing of a technical directive by the FIA concerning power units and fuel-flow meters, following a request put in by Red Bull. Afterwards Ferrari strenuously denied a connection between the two. And certainly, their dismal race pace suggested something seriously awry in the set-up, rather than a slight reduction in straight-line speed; though their qualifying performance had already indicated the latter.

Ferrari’s struggles trimmed the number of cars in the hunt for victory from five to three, only one of which wasn’t silver. Max Verstappen, second, stayed within two seconds of Bottas as long as he could. But after a dozen laps he was beginning to slip back – it later transpired he had somehow picked up a hole in his car’s floor, caused a loss of grip and worsening of tyre degradation.

Red Bull had to take their chance to force Mercedes’ hand. They did so on lap 13, prompting Mercedes to bring Bottas in the next time around. This had the added effect of dropping Bottas behind Leclerc, which might have delayed the Mercedes driver, but on fresh tyres he was now around four seconds faster than the ailing Ferrari, and lost virtually no time getting by.

The Circuit of the Americas has become a much rougher and bumpier track since it first hosted F1 seven years ago. The bumps were an obvious problem from the start of practice and persisted despite being ground down overnight on Friday.

“The biggest effect in terms of driving was trying to avoid mistakes into turn one with the bumps in the braking zone,” said Bottas. “Apart from that, there was a line in turn nine where there was a big bump that you could kind-of have a little bit less of an impact with that line, you would lose a little bit of time.

“When I could, I tried to manage the car by taking that line, taking the time loss but making sure we didn’t damage the car. Obviously for example Sebastian had damage in his suspension, probably because of the bumps, so we tried to play safe when we could.”

The other, more gradual, change in the COTA track surface is how abrasive it has become. It takes more out of the tyres, which helps promote more strategy variation.

So while Bottas and Verstappen were on course to pit twice, Hamilton had a genuine opportunity to take the win by extending his first stint and making a single stop. It was a tall order, however.

First he had to stretch his opening stint on mediums tyres as long as possible. He went 10 laps longer than Bottas – slightly further than his team told him to. Hamilton stayed out an extra lap, by which time Bottas had closed on him, and had to pick his way past his team mate.

Hamilton rejoined the track 21 seconds behind Bottas and pressed on, gaining enough ground so that when the leader made his second pit stop on lap 36 it left Bottas chasing a nine-second gap to his team mate.

But when Bottas came around at the end of lap 37 and had cut a full three seconds out of Hamilton’s lead, it seemed unlikely the world champion-elect was going to be able to celebrate his title with a win. He came very close, however.

Before the race weekend began the series owners and regulators showed off their recently rubber-stamped new rules package for the 2021 F1 season. Much of it is geared around creating cars which can race each other properly, rather than follow each other in a train of turbulence or blast past in the DRS zones.

Bottas’s pursuit of Hamilton vividly illustrated the shortcoming of modern F1 the 2021 regulations aims to fix. His significant pace advantage over Hamilton dropped to almost nothing as he got into the turbulence from the leading W10. As the race entered its final 10 laps he was taking just tenths of a second out of his team mate.

Finally by lap 50 he got within a second, and DRS did the rest. He tested Hamilton’s defences once, wasn’t quite close enough to make it stick. “Lewis had a bit of a mistake in turn 11 so I could suddenly get this first opportunity,” said Bottas.

“He covered the inside, so I had to take the outside line. I was ahead, but he braked very late, so eventually I had to run off the track to avoid the collision. But it’s fine because if I was at his position I would have done the same, to defend as well as you can.”

When Bottas got properly within range the lead changed hands with a sense of inevitability. “He went a bit wide in turn eight or nine, so I could get very close before the back straight and then it was much more straightforward.”

Verstappen was winding up to attempt the same when Kevin Magnussen’s front-right brake disc failed in a puff of carbon smoke approaching turn 12. The Haas came to a rest in the gravel, and with no time to recover it before the end of the race, yellow flags remained at the corner until the end. Deprived of the likeliest overtaking opportunity on the track, Verstappen had to follow Hamilton home, and Mercedes grabbed their ninth one-two finish of the year.

Leclerc’s race got slightly better after he got rid of his first set of tyres, though a slow pit stop meant he ended the race closer to the midfield than the podium. Alexander Albon also didn’t figure in the fight at the sharp end after picking up damage at the start, which forced him into the pits.

This would have been the ideal moment to strap on a set of hard tyres, but he didn’t have any, as a crack was discovered on his only set during Saturday’s running and he wasn’t allowed to replace it. He made his way up to fifth on a three-stop strategy, but his fastest lap was 1.8 seconds slower than Leclerc managed in the final stint on the same tyre compound (though Leclerc had a fresh set).

The yellow flag also had an effect on the battle to be ‘best of the rest’. Ricciardo had passed Norris on lap eight, but ran a single stop to the McLaren driver’s two, and at the end of the race Norris was reeling him in at a rate of two seconds per lap on fresher, softer tyres. But the yellow flag forced him to back off, and the pair crossed the line separated by less than four tenths of a second.

Daniil Kvyat was not as restrained as Norris, and threw one up the inside of Sergio Perez at turn 15 on their final lap. The damage broke Perez’s front wing and knocked him off the track; for the second weekend in a row Kvyat was penalised for a collision and lost a points finish as a result. Perez was restored to 10th behind Sainz and Nico Hulkenberg.

Pierre Gasly had been running eighth with eight laps to go, but picked up suspension damage in a collision with Perez and had to retire. While one Racing Point driver had stormed from the pit lane to a points finish the other, piloted by Lance Stroll, went off on lap one, pitted twice, and came in 13th.

Haas had no respite from their dire 2019 campaign on home ground: Magnussen and Romain Grosjean might have been better off pedalling the NASCAR they drove around the track on Thursday. Grosjean had made positive noises about his car during the very cold first practice session, then he binned it in the second session and was never happy with its balance again. He collected 15th ahead of George Russell, the only Williams driver still running after hydraulic failure put Robert Kubica out.

Sunday was only the second time in Formula 1 history that a driver has won a sixth world championship title.

When Michael Schumacher did it at Suzuka 16 years ago he endured a scrappy afternoon, came worryingly close to letting Kimi Raikkonen snatch the title from him, and finished almost a minute behind Rubens Barrichello in the other Ferrari.

There are better comparisons between the two to be drawn, yet it’s an amusing side note that, at this moment of triumph common to just these two drivers, both finished behind their respective team mates.

The point is that neither made a habit of this. But Bottas can take the consolation that while Hamilton has outdone him again over the season, he has put up a stronger fight than ever.

That, as much as the growing threat from Ferrari and Red Bull, is why Hamilton understands he is likely to have an even tougher fight when he starts thinking about title number seven.