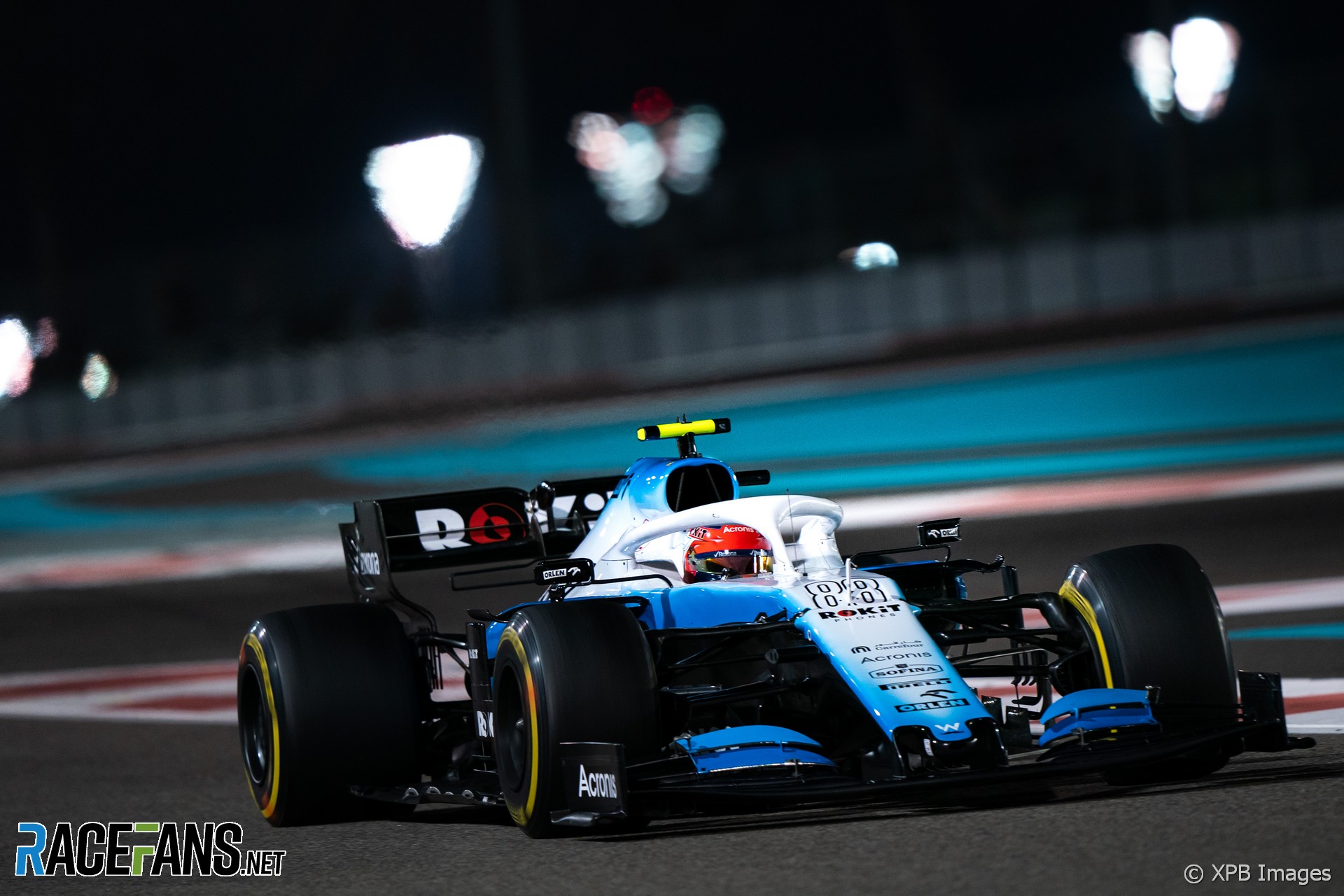 In the round-up: Robert Kubica said his Williams felt much better in the first practice session but it didn’t last.

[icon2019autocoursempu]Kubica said he was much less happy with the balance of the car in the second practice session.

It started pretty well I would say. I was quite happy with the balance and the things we were trying, more for the next year I think. Surprisingly there were some areas in the car which never felt so good.

But to be honest in FP2 everything which was positive disappeared for whatever reason. So we have to now go through. We didn’t really change set-up or stuff like this, or whatever we changed, we came back. But we couldn’t get back the behaviour of the car and the feeling I got in FP1.

Normally FP2 is always a better session, cooler conditions, track temperature much lower. But for us, for whatever reason, it was opposite.

Formula 1 is launching an official line of perfumes next year.

Which of these do you most want to smell like? #F1 #AbuDhabiGP pic.twitter.com/ovhyXPZDGK

F1 is to launch a range of….fragrances. Unreal.

"Formula 1® today announces an exciting collaboration with Designer Parfums, to create a unique fragrance collection, which will go on sale in March 2020."

Here’s the giant TV we get to see along with live timings and also mini sectors at @ymcofficial. There’s no way we can watch the cars for real on track as the media center is sealed with no windows! #AbuDhabiGP #F1 pic.twitter.com/In6M11GzBW

Kevin Magnussen: "He obviously had damage with Bottas crashing into him, he has to go to another floor – the same one as me. I’m hoping that wasn’t the reason he was so fast, we’ll see."

Alexander Albon: "The balance was OK and we know we need to improve a little bit here and there but Max looked quick so let’s see how things go tomorrow. I think I’ve got a little bit of fine tuning to do on my side, especially in sector three, but we’re chipping away."

Jody Eggington: "We ran the Option first followed by the Prime, which was never going to help flatter us, and we came here with a number of test items, which were unfortunately interrupted by the red flags."

Alan Permane: "As always we seem competitive on high fuel and we will be looking at various settings overnight to have the car in the right configuration to make some headway in final practice and qualifying tomorrow."

"Although the SmoothRide 3D analysis hadn’t previously been used on a race track, Tarmac, NRP and Dromo recognised the potential of the precision technology which had proven itself on highways and airport runways. It was to be the first use of the technology in the UK."

We need to look past Grosjean’s complaints, says Ben:

When the right words are focussed on, you can see that Grosjean isn’t always moaning. From the footage of Bottas’s onboard, I’d say Bottas has to be pretty much fully responsible for this. Grosjean looked twice and this was while Bottas was behind him. It effectively was a lunge down the inside by Bottas which really isn’t a good thing to be doing here.

Bottas did apologise, and once he had, Grosjean accepted it and didn’t keep moaning. Grosjean appears to moan a lot about his own car, but I feel the praise for it and other comments that help the team out are kept too hidden.

They won’t have kept him for nothing. He’s certainly looking good so far this weekend and I think he should have been one of the star performers last time out. that was an excellent weekend, but he had an MGU-K failure which pretty much took him out of what very likely will have been a chance to get far closer to Magnussen in the standings. He’s had a better season in my opinion anyway so is unlucky to be this far behind.
Ben Rowe (@thegianthogweed)