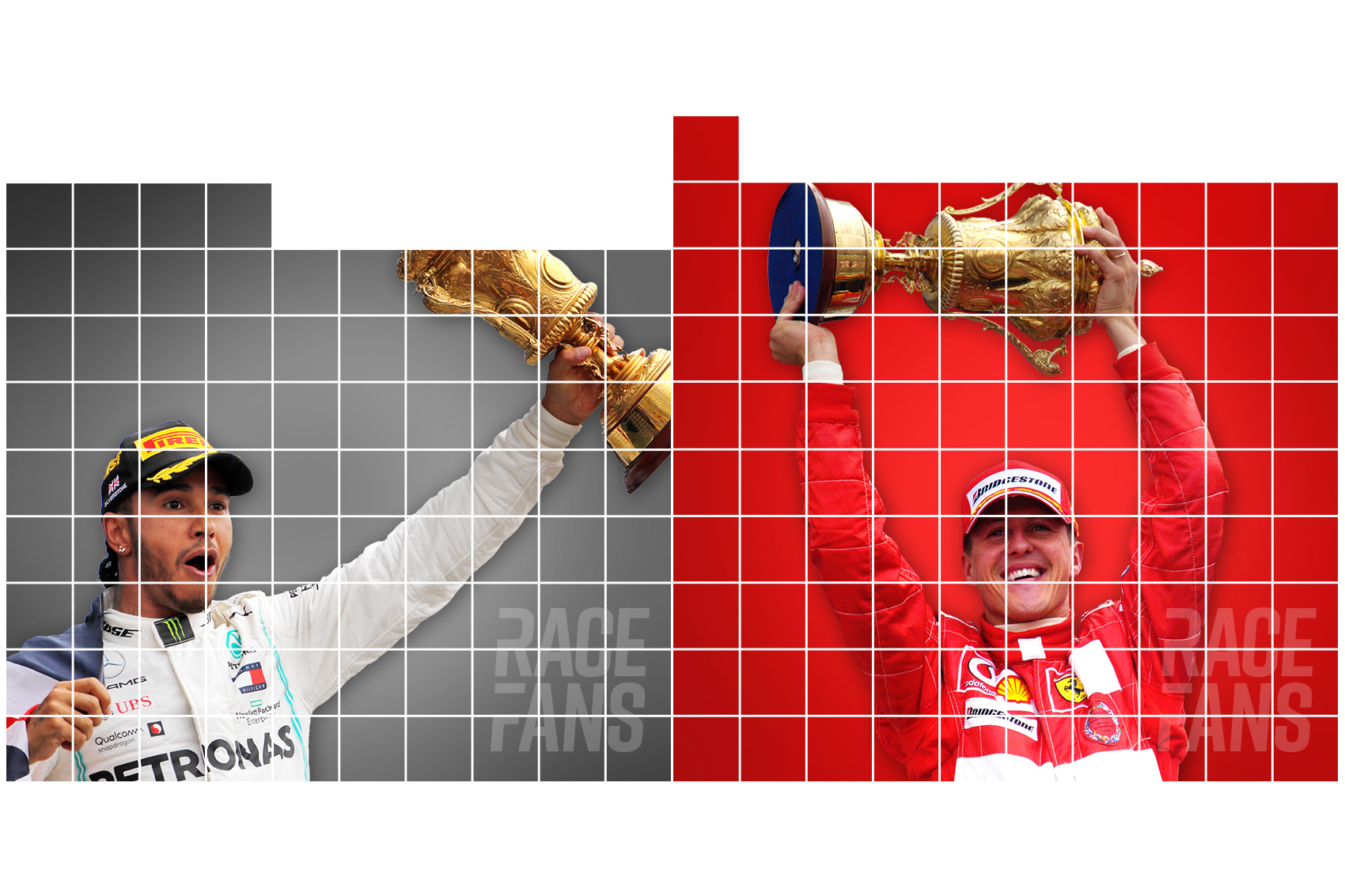 When Michael Schumacher crossed the finishing line first at the 2006 Chinese Grand Prix, we knew we had seen one of the last victories of a tremendous career. Just two rounds of the season remained, and Schumacher had already announced he would leave F1 at the end of the year.

His eventual return to F1 with Mercedes, who were engine suppliers to McLaren at the time, was not on the cards. Few would have expected it, and surely none would have thought the driver who had dominated much of the previous decade would come back to F1 for three years without winning another race.

So that superb win in tricky conditions at Shanghai proved Schumacher’s swansong victory. He signed off his 2006 campaign with an astonishing tally of 91 wins, a figure which hadn’t changed when he left F1 for good six years later.

Schumacher didn’t just break the previous record for most Formula 1 wins, he smashed it. He reached Alain Prost’s benchmark of 51 wins, which had stood since 1993, in 2001. By the time he was done with F1, Schumacher had added two score victories to it.

Even with the F1 calendar steadily growing in size, it would surely be a long time before anyone would approach Schumacher’s 91 wins. As it turned out, Schumacher’s record may ultimately fall to a driver who made his debut in the race which followed his 2006 exit from Ferrari.

It was obvious from the first corner of the first race of Lewis Hamilton’s F1 career that he was a special talent. Fernando Alonso, who had just denied Schumacher a title-winning end to his Ferrari career, saw his new team mate sweep audaciously around the outside of him at the start of the Australian Grand Prix.

Hamilton did not win that race, but within just six rounds he found his way to the top of the podium. He has won at least one race every season since.

That Schumacher and Hamilton are two of the greatest talents motor racing has ever seen is beyond question. But what allowed them to ascend these heights and win, at the time of writing, 13 world championships and 175 races between them?

Of course neither would have enjoyed such success without consistently competitive machinery at their disposal. Predictably, a common criticism levelled at both is that they wouldn’t have won so many races without such strong cars. But drivers do not get race-winning equipment for year after year by accident.

Hamilton is unusual in that he had a potentially championship-winning car in his very first season. With better luck and/or judgement in the final two races of 2007, he might even have been world champion in his rookie season.

Like most drivers, Schumacher did not start his career in a front-running team. Following a one-off drive for Jordan he joined Benetton – race-winners in 1989, 1990 and 1991 – and scored their only win of 1992 in his first full season. He followed that up with another in 1993, and the team took advantage of extensive changes to the rules in 1994 to make a major step forward. Schumacher won eight races and took the title along with it.

As the final three seasons of Schumacher’s career demonstrated, a great driver cannot necessarily win races in an average car. But while Schumacher’s return to F1 was win-less his 2012 team mate Nico Rosberg managed to win a race in the Mercedes W03. And Schumacher could have won in Monaco that year: He would have started on pole position had he not incurred a grid penalty for crashing into Bruno Senna at the previous race.

Whether Hamilton will have to endure uncompetitive equipment later in his career remains to be seen. But he did seize two chances to win races in McLaren’s unfancied MP4-24 of 2009. And four years later, after replacing Schumacher at Mercedes, he took a single win in Mercedes’ W04. Rosberg won twice, though that wouldn’t have been the case had Hamilton not suffered a puncture while leading at Silverstone.

Schumacher and Hamilton exemplify how great drivers can snatch opportunities for wins in sub-standard cars, and win prolifically when they have top-quality equipment. Schumacher’s Ferraris of 2000-04 and Hamilton’s Mercedes since 2014 are obvious cases of the latter, where the pair scored the bulk of their huge win tallies.

But there are two other important dimensions to take into account when considering the relative successes of these two great drivers.

Schumacher’s rapid rise coincided with the departures of several other champions and prolific race winners. Alain Prost retired after 1993, Nelson Piquet – Schumacher’s team mate for a handful of races in 1991 – stepped before then, and Ayrton Senna was tragically killed in the third race of 1994. Nigel Mansell briefly returned from IndyCar racing to fill the void left by Senna, but his attempt at a full-time return in 1995 proved a failure.

Hamilton, of course, arrived on the scene immediately after Schumacher’s first retirement. At that point two other drivers were widely expected to assume the Schumacher mantle as the sport’s leading driver: his replacement Kimi Raikkonen and Alonso (who, like Schumacher before him, had switched teams immediately after winning his second title). Compared to Schumacher’s 91 wins, Alonso and Raikkonen had 15 and nine respectively.

That they didn’t achieve Schumacher’s levels of success was only partly due to the rise of Hamilton. It was also because of the emergence of another major talent who went on to win multiple championships: Sebastian Vettel.

By the time Red Bull’s prodigy had won his fourth world championship in 2013, sealed with a record-breaking run of nine consecutive race wins, the 26-year-old Vettel had amassed 39 victories – 17 more than Hamilton at that point – and seemed the likeliest threat to Schumacher’s record. It would be an appropriate achievement for the driver referred to by some as ‘Baby Schumi’, who had cut his teeth on the same Kerpen kart track as his idol.

But the V6 hybrid turbo era hasn’t been as kind to Vettel, even after he succeeded Alonso as the latest driver to fill the Ferrari seat once occupied by Schumacher. Hamilton, of course, has enjoyed sustained success at the wheel of Mercedes’ mighty cars. He has won the most races of any driver every year and only missed out on the title once, to team mate Rosberg, due to a combination of unreliability and a few too many sub-par starts. While doing so, he has propelled himself within touching distance of Schumacher’s wins record.

The other dimension which explains the relative success of Hamilton and Schumacher is the quality of competition they faced within their own teams – always a contentious point. It is hard to imagine any of Schumacher’s team mates taking a title from him in the way Rosberg did to Hamilton, not just because of Schumacher’s superiority, but because his team mates were required to play a supporting role to him.

This has generally not been the case at Mercedes for Hamilton and his team mates. Indeed, between 2014 and 2016 Hamilton’s only real rival for the title was his own team mate. Since Rosberg’s departure, Valtteri Bottas has often been allowed to challenge Hamilton for wins. The notable exception was in late 2018 where Bottas was required to surrender victory in Russia to help ensure Hamilton beat Vettel to the title.

Such tactics were more commonplace in Schumacher-era Benetton and Ferrari. One of the most notorious examples occured at the A1 Ring (now known as the Red Bull Ring). During the 2001 race Rubens Barrichello, Schumacher’s team mate during the peak of his successes, was running second behind McLaren’s David Coulthard when Ferrari ordered him to let Schumacher by into second.

Barrichello reminded the team what they had said one year earlier. “‘You guys told me that, in my face’ – they said ‘oh Rubens we can talk later’.” After eight laps of wrangling, Barrichello let Schumacher through for his 56th career win. Three races later, Ferrari made a show of not ordering Barrichello to let Schumacher by when he led his team mate to the flag at the Nurburgring.

According to Barrichello, Schumacher’s preferential treatment behind the scenes was less overt. Although he accepted his pit strategy would usually be the “B option” compared to Schumacher’s, Barrichello stressed the pair usually received equal equipment. He even cast doubt on how far Schumacher understood he was the team’s preferred driver.

“He was a bit naive in the way that he worked,” said Barrichello. “So many times I grabbed my chair because a meeting was already finished. And then they started another meeting with just Michael there. And I said ‘hmm, this is funny’. I took my chair and I would just sit there, say nothing and just stay there.”

Mercedes insists it is more open with its drivers. The fact Rosberg beat Hamilton to the 2016 title is surely proof of that. Team principal Toto Wolff says their approach won’t change even as Hamilton is on the brink of reaching Schumacher’s record tallies of wins and championships.

“We have been always very neutral to the drivers,” said Wolff. “We want to provide them with equal equipment and equal opportunity and both know that there is no hidden agenda within Mercedes, no politics.

“I think we will see how they get out of the blocks and end up. I hope that Valtteri will have another great season but equally I obviously cheer for Lewis, giving it his best as a seventh title to equal Michael’s record.”

How far will Hamilton go – and who will catch him?

Hamilton hasn’t racked up his wins at quite the same rate as Schumacher. His most recent win at Yas Marina last month came in his 250th race start; Schumacher’s 84th win came in the notorious six-car race at Indianapolis in 2005. However the long win-less coda to Schumacher’s career leaves his final strike rate of 91 wins from 306 starts a realistic goal for Hamilton.

If Hamilton reaches that, the question then becomes how much further is he prepares to go? Will he race on in pursuit of a century wins and face down the rising threat from new-generation talents like Max Verstappen and Charles Leclerc?

It may be not Hamilton’s rivals which slow his winning rate but F1’s desire to level the playing field and dilute the kind of dominance Mercedes have enjoyed in recent years. But if that happens, it may also make it much harder for future drivers to achieve the kind of staggering win tallies Schumacher and Hamilton have amassed.