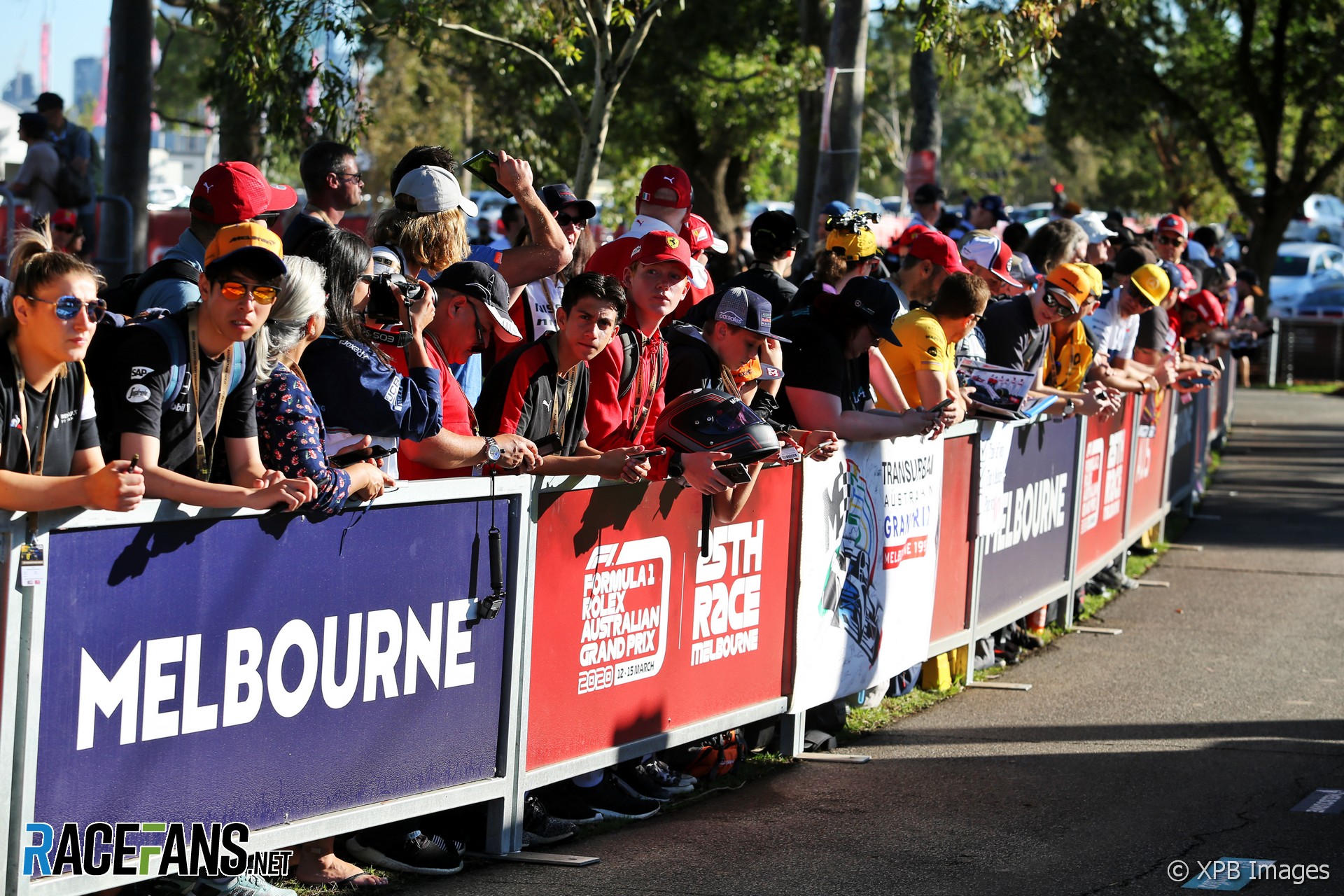 The 2020 Australian Grand Prix was doomed the moment a McLaren team member was positively diagnosed with Covid-19. Actually, make that “the event was doomed the moment the Chinese Grand Prix was cancelled”, for how the race could reasonably be expected to go ahead as other events across the globe – whether motorsport or tennis or NFL or badminton – fell by the wayside is beyond the kin of reasonable folk.

All the warning signs were there during pre-season testing. Yet F1 maintained its usual head-in-bubble belief of being bigger and stronger and better than a threat the world’s best medical practitioners warned about, and persisted in going ahead to Australia despite the overwhelming odds against the race taking place. F1 CEO and chairman Chase Carey even detoured to Vietnam in a bid to avoid cancelling the country’s round, due to be held in three weeks’ time.

This gung-ho attitude served F1 well in the past: racing in the USA just a fortnight after 9/11, criss-crossing the globe during a previous corona epidemic (SARS); overcoming restrictions on air travel in the wake of Eyjafjallajökull’s ash plumes, numerous typhoons in Japan and the rest. But the Coronavirus proved to be more than a match for it.

The bottom line is that upwards of 2,000 F1 personnel followed over 200 tonnes of kit to the far side of the world, only for the event to be canned barely hours before the cars were due to hit the track. What an incredible waste of human resources, of cash, indeed, of emissions immediately after the sport pledged to go carbon neutral. And above all, at what risk to health?

There were warning signs along the way which F1 steadfastly chose to ignore, instead justifying the cancellation of F1’s race in China – the epicentre of the epidemic – on the basis that sea shipments would shortly be dispatched. Consider that logic: Cancel sea freight to Shanghai required by mid-April but fly to Melbourne imminently.

True, the pandemic had not taken hold by the end of February, but by last week it most certainly had, yet folk still headed Down Under. That Italy was in lockdown, that various countries had issued travel and health warnings, seemed only to strengthen F1’s resolve that the show must go on.

Usually the opening race of a season is cause for celebration and anticipation after long, dark winter months spent indoors, with crews boarding happily for their longest flights of increasingly longer seasons, yet during and after testing they expressed their concerns, particularly as death tolls climbed. F1 folk are human, with partners and kids and pets at home.

Yet many feared they’d spend weeks in quarantine (or worse) upon their returns. First Bahrain imposed border and spectator restrictions, then stated its race would be run behind locked gates. Did F1 at all take heed? Of course not, instead planning routes that bypassed hotspots and priding itself on saving the race – one that (not so coincidentally) pays amongst the highest hosting fees.

Simultaneously Australian Grand Prix Corporation CEO Andrew Westacott told a Melbourne radio station that the event would not “ban fans from the event”, further trumpeting the fact that, “The AlphaTauri cars and Ferrari cars are on their way from Avalon [Airport] as we speak, so it’s really good.” Westacott continued. “The key personnel are on their planes.” Good, Andrew? Really, really good?

Forget not that he heads an organisation that relies on $60m in public money to burnish the city’s image globally. Equally, F1 commercial rights holder Liberty Media is desperate to hold on to the estimated $30m annual hosting fee – particularly as its FWONK share price plummeted by 60% since the effects of Covid19 on F1 became apparent. Every bit of cash helps.

With public money at stake the cost of cancelling the race – if taken by AGPC – could pan out at $60m when ticket refunds are taken into account: 100,000 fans were expected at an average of $300/head, which alone adds up to an easy $30m. Somebody would need to take that decision in the full knowledge that public wrath would surely follow, and successful politicians seldom make unpopular moves.

Thus, the trigger was McLaren’s withdrawal after a staff member tested positively for Covid-19 with another dozen staff members or so on the suspected list. Only then was F1 shaken out of its stupor – despite Lewis Hamilton’s earlier comments that he was “very, very surprised that we’re here,” adding that “it’s shocking that we’re all sitting in this room.

The reigning multiple champion then underscored his opposition to the event under prevailing circumstances by saying “Cash is King” in reply to a media question. Some may view that as a bit rich from a driver with Hamilton’s eye-watering salary demands, but there is no arguing the validity of his emotionally-charged words.

Any wonder that he departed Melbourne early Friday morning, as did Alfa Romeo driver Kimi Raikkonen and Ferrari’s duo Sebastian Vettel and Charles Leclerc. Indeed, one hears of various stern words between drivers and their teams, including threats of invoking Australia’s strict Health and Occupancy laws.

McLaren’s decision had not been taken lightly, with the team’s CEO Zak Brown saying that, “As a racer it’s the most difficult decision I’ve ever taken, but as CEO it’s probably the easiest.” He did not mean that flippantly: Tough decisions demand real leadership skills, and regardless of how this entire debacle plays out, Brown deserves to be remembered as the man who took the first major decision for all the right reasons.

Still, it seemed F1 was intent on going ahead with 2020’s opening race until a vote on whether to cancel the race produced an even split 5-5 between the team bosses. Despite the stalemate at the meeting, held late Wednesday night at a meeting held at upmarket Crown Towers, they persuaded F1 and AGPC that there simply was no appetite to proceed, 25th anniversary of the race in Melbourne or not, behind closed doors or not.

A comrade had been struck down by potentially lethal disease in a far-off land, and that was it. During the meeting news filtered through that about a dozen more McLaren crew members were heading for quarantine, and that tipped the scales in favour of cancellation. (As this was written we received confirmation the number is now 14).

Thus, began an extended game of ‘Who Blinks First’: Liberty or AGPC squabbling about who should cancel the race, both acutely aware of the old adage of whoever pulls it, pays for it. Compounding the matter was that Carey was still en route from Hanoi, and thus F1’s managing director Ross Brawn was effectively the man sitting in the hot seat.

All the while FIA officials stood by, relaying information to president Jean Todt in Europe, but the governing body was unable to intervene as it was a commercial matter, and by EU decree may not involve itself in such issues. It supports whatever decisions, but ultimately commercial issues are sorted between commercial rights holder and the race promoter.

According to various sources matters thus came to a head during an early morning meeting in Melbourne, attended by F1 and AGPC representatives and local government officials, plus Martin Pakula, Victoria’s Minister for Tourism, Sport and Major Events, who would ultimately need to decide whether $60m of public money should be written off. His response during this three-hour meeting can only be imagined….

Equally, AGPC, led by chairman Paul Little, demanded that F1 cancel the race, while Brawn and co. pushed and pulled in the opposite direction. Another stalemate seemed in the offing until the decision was effectively taken out their hands by the intervention of the state’s Chief Medical Officer Andrew Wilson – and endorsed by Premier Daniel Andrews – who advised that mass gatherings should be prohibited.

All the while team employees – most of whom dedicate themselves to F1 for the sheer love of it – and fans, who already pay heavily for their passion, became unwilling (and unwitting) pawns in power plays between a US-listed media giant and a state-funded Australian organisation, with each side digging in heels until the decision fell that all fans were to be banned from the event. Not surprisingly, extra police had to be deployed.

Matters were not aided by conflicting news reports, at times even within the same organisation. Nor, for that matter, was the situation helped by total radio silence on the part of F1, AGPC and the teams, who collectively failed to grasp that no news is not good news, but an opportunity for ‘fake news’ to spread. This global sport must do better.

The bottom line is that Melbourne’s 25th race will now be carried over to next year – unless trust has irrevocably broken down between the parties, which is possible after this unmitigated fiasco – for the City of Melbourne is unlikely to stump up the considerable build costs of the Albert Park (street) circuit two times in one year in order to hold the race this season. That is, of course, one of the downsides of such facilities in the current environment.

Where to now? Senior F1 figures believe that the season will start no earlier than the Dutch Grand Prix in early May, with some even suggesting that it could be delayed to Baku in June. Whatever, that means cancelling (at least) next week’s Bahrain Grand Prix and early April’s Hanoi round. Guess what: No decision has yet been taken as where F1 will be in seven days’ time…