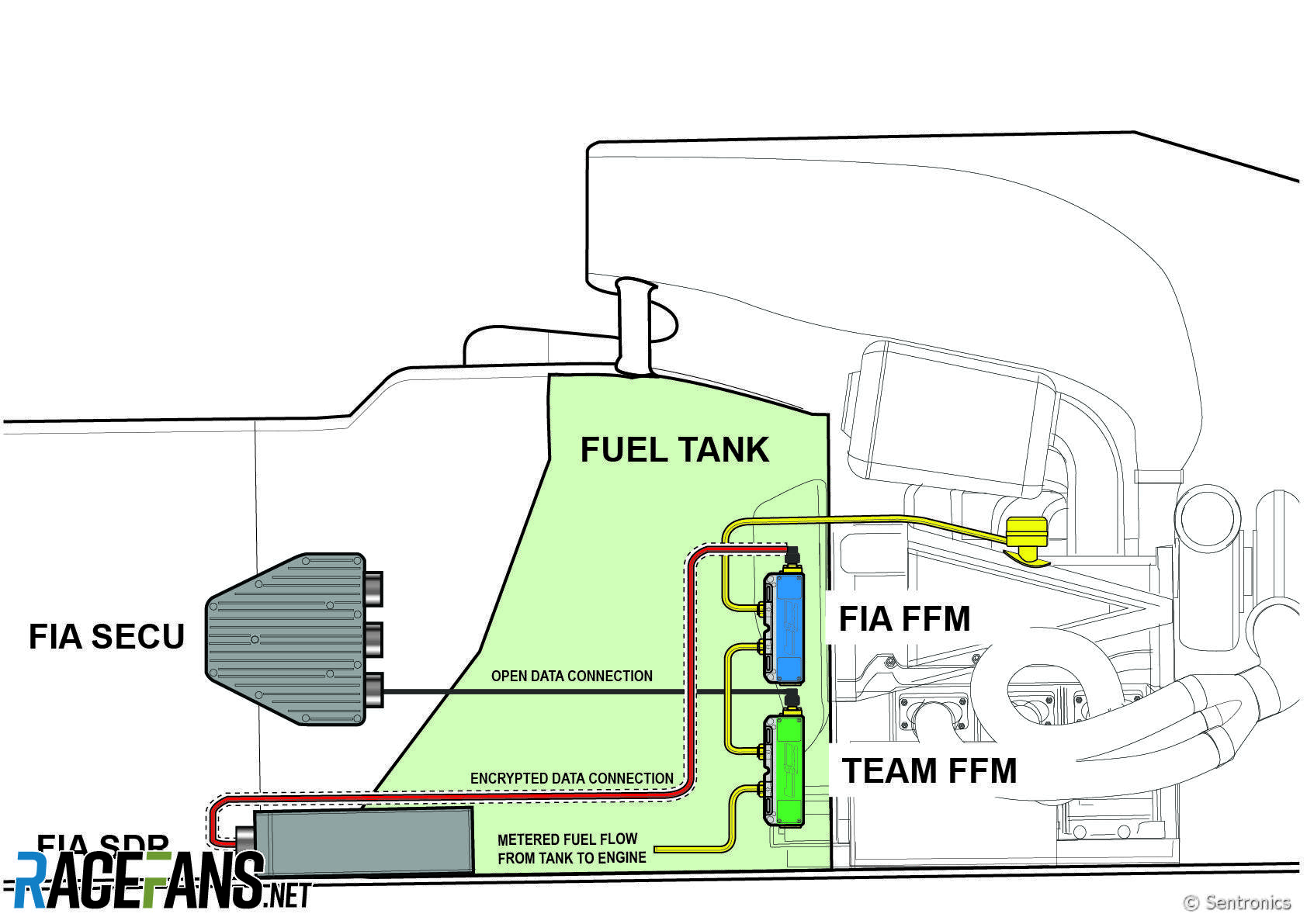 The new, second fuel flow meter the FIA has added to Formula 1 cars this year is designed to prevent a trick Ferrari is believed to have used last season.

Ferrari insists its car conformed to the rules throughout 2019. However rival teams have criticised the FIA for reaching a settlement with the team without disclosing details of its investigation, part of which is believed to have concerned the fuel flow rules.

Since 2014, F1 teams have been required to fit a fuel flow meter which ensures their power units do not consume fuel at a rate greater than 100kg per hour. However last year some teams began to suspect Ferrari had found a means of exceeding the limit.

One theory held that Ferrari had developed a system known as ‘aliasing’ which could allow them to deliver fuel at a higher rate when needed, such as on qualifying laps.

The fuel flow meter measures the rate of flow very quickly – 2,200 times per second. However it remained theoretically possible for teams to deliver fuel to the meter in a sufficiently precise way that it appeared to be flowing at a slower rate that it was.

One technician consulted by RaceFans estimated the potential power gained from aliasing could be as much as 50bhp.

Last year Red Bull asked the FIA to clarify whether teams were allowed to use such a technique. The FIA responded by issuing a technical directive ahead of the United States Grand Prix stating it would be illegal. During that weekend Ferrari’s previous straight-line speed advantage appeared to have lessened.

The most recent version of the 2020 Formula 1 technical regulations, published 10 days ago, continues to refer to “a single fuel flow sensor” in the cars. However teams have been required to fit a second sensor under a further technical directive.

There are two important differences between the new fuel flow sensor at the original one. The new ‘FIA fuel flow meter’ samples the fuel flow rate in a different way, making it harder for teams to get around the limit, and the data it generates is encrypted and available only to the FIA.

Manufacturer Sentronics says this will make it “impossible” for any team to exceed the fuel flow limit.

“The new device incorporates anti-aliasing technology and full data encryption,” according to Sentronics. “The anti-aliasing technique randomises when the device makes its measurements, ultimately making it impossible to synchronise any ancillary parts to the measurement frequency. Full encryption ensures the authenticity of the data and privacy to the FIA.

“This eliminates the possibility of the data being used as part of a feedback system to gain a competitive advantage.”

The new fuel flow meter was added to the cars at pre-season testing and will continue to operate alongside the existing device. The FIA will retain a pool of the new meters and allocate a sensor to each car at the beginning of each event.

“This new variant of the FlowSonic fuel flow meter is not only one of the most technologically advanced currently available, but is an important step forward in improving the FIA’s policing of the maximum fuel flow regulations in F1,” said Sentronics managing director Neville Meech. “We’re proud to lead the market in solid-state fuel flow meters, and to demonstrate our ability to develop world-class technology in rapid timeframes.”

The FIA announced last month it had reached an settlement with Ferrari following its investigation into their power unit but would keep details of its finding secret. This prompted an angry response from the seven non-Ferrari-powered teams, who have demanded clarifications from the FIA as to whether Ferrari operated within the rules at all times last year.

In a further statement, the FIA admitted it was “not fully satisfied” Ferrari’s power unit operated “within the limits of the FIA regulations at all times” during 2019. The careful wording indicates they suspected not that the power unit was illegal, but that it may have operated outside the rules at certain times.

Ferrari “firmly opposed the suspicions and reiterated that its [power unit] always operated in compliance with the regulations,” the FIA noted. Of course, this did nothing to placate the seven teams who complained.

As those teams already had details of the new fuel flow sensor, the fact it is so clearly aimed at preventing anyone getting around the fuel flow rules shows why their suspicions were so strong.