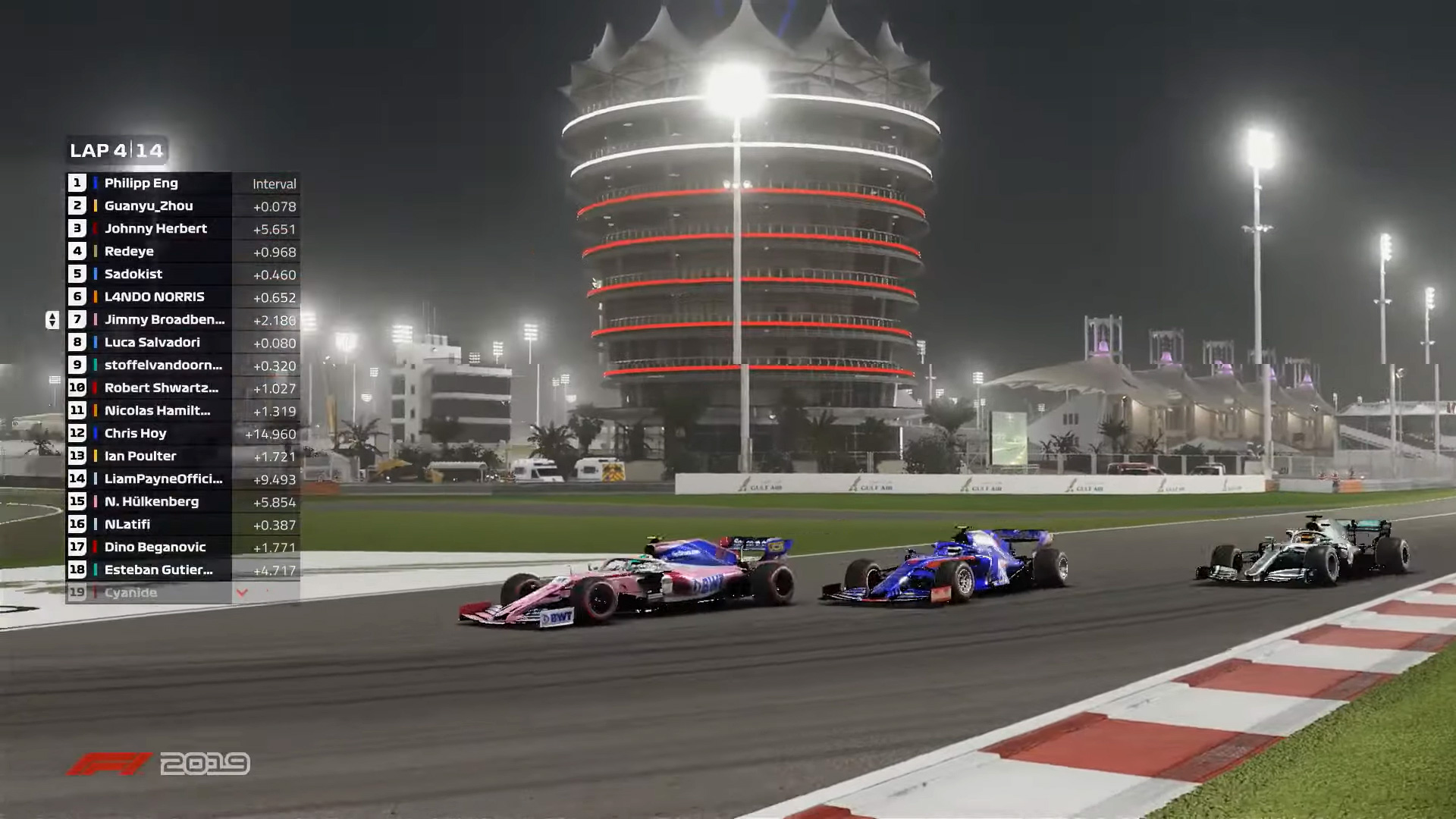 No one would hold up Sunday’s Virtual Bahrain Grand Prix as an example of the best F1 and Esports has to offer.

Viewers expecting to see current and former F1 racers competing were disappointed to discover they filled fewer than half of the 20 virtual cars. Connection problems knocked Lando Norris out of qualifying and meant his car was driven by an AI for most of the race.

Those glitches meant a lengthy delay between qualifying and the race, plus a shortening of the main event from 28 laps to 14. Unfortunately Anthony Davidson wasn’t made aware of this and ended up missing the race, his place also taken by an AI.

Several drivers crashed on the first lap. Fortunately the damage model had been disabled or the field would have been depleted by more than just connection problems.

While there was no shortage of action, quite a lot of it seemed to be overlooked. For those used to watching real-world racing, the lack of replays took some getting used to.

The presenters did their best to keep on top of things, and if at first the approach felt a bit ‘took many cooks’, the impromptu round-table chat helped while away the extended pre-race interval. But at a time when most of us are being told to practice social distancing, the sight of four presenters crowded around one desk was troubling.

Yet, for its faults, I suggest we give F1 a pass over its first attempt at a Virtual Grand Prix. The race was thrown together in little more than three days and involved remotely networking in drivers and personalities of varying skill levels. The Virtual Bahrain Grand Prix couldn’t take itself too seriously and it didn’t.

With no motor sport going on at the moment and the prospect of very little happening for the coming months, this race and the other Esports events which have been organised recently provided many people with much-needed relief from the increasingly grim reality we now share.

That much was clear from the broadcast figures. According to F1’s head of Esports Julian Tan, the race attracted a peak of 400,000 viewers across its streaming platforms. Another 100,000 watched Norris’s Twitch stream, where he dialled up the likes of Max Verstappen, George Russell, Carlos Sainz Jnr and his McLaren boss Zak Brown during the pre-race delay.

Inviting ‘influencers’ and celebrities to the race may not appeal to those of us who are F1 fans first, but the rationale of doing so as a means to appeal to new viewers is hard to argue with. I may not be interested in watching Liam Payne drive a virtual racing car but how many of his combined 50 million Twitter and Instagram followers – more than twice as many as Lewis Hamilton’s – were?

But as the news reaches us this week that F1’s pre-season hiatus will be at least one week longer – and, likely, much more – F1 needs to think seriously about how to develop the concept beyond the slapdash race thrown together yesterday into something people will want to watch regularly. Particularly when it is being touted as a substitute for real races.

F1 needs to appeal to both new fans discovering the sport through streamers and signers, and its core audience who want to enjoy quality racing. Splitting the event into a ‘Pro/Am’ format would allow this. Have one race for celebrities and influencers who fancy a jolly, then a second ‘main event’ aimed at more serious players run to more demanding rules with no driving assistance allowed and realistic damage settings. The sport can have its cake and eat it by allowing F1 drivers to enter either or both.

Inevitably F1 will prefer to continue using its official game for these events. That will mean it cannot take advantage of some the exciting options open to other championships, such as IndyCar, which is planning to take in some tracks the real-world series doesn’t race on for its iRacing-based series. This will hopefully give food for thought for the 2020 and future editions of Codemasters’ official series.

The fact F1 was able to fall back on Esports to provide some kind of racing action last weekend is partly thanks to the effort Liberty Media has put into developing this area since it took over the sport. It’s hard to imagine anything like this taking place while Bernie Ecclestone was running the show.

While the first Virtual Grand Prix was entertaining, the current format has room for improvement, and those running the show surely know it. “Next time we’ll see a much more measured race in general,” predicted BBC F1 radio commentator Jack Nichols, who has years of experience in talking about virtual racing, at the end of the broadcast.

“The chaos down towards turn one where people were crashing at the start, it isn’t what we want to see, and I don’t think it’s what the drivers want to happen. But this is a fairly last-minute call-up for a lot of these guys.”

This was a fair assessment. While it’s never going to be a substitute for the real thing, F1’s Virtual Grand Prix has obvious potential to be a welcome form of racing-based entertainment while one of the sport’s longest race-free spells grinds on.

Did you watch the Virtual Bahrain Grand Prix? Do you think the format could be improved – and if so how? Have your say in the comments.

47 comments on “F1’s Virtual Grand Prix can be great, if they dare to go bigger and better”