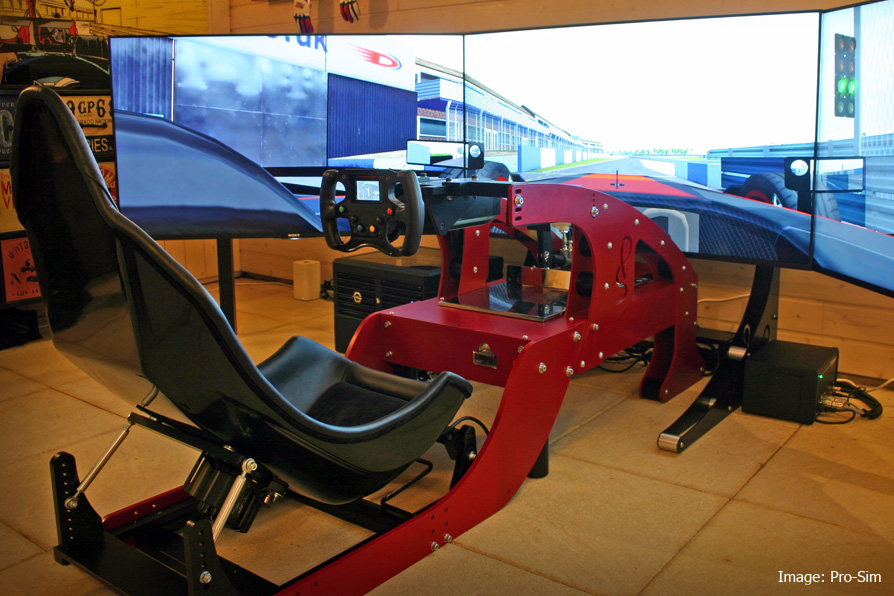 Whether he’s playing F1 2019 or Euro Truck Simulator 2, Alexander Albon has the very best simracing equipment at his fingertips and feet.

The Red Bull Formula 1 driver has built a simracing set-up most online racers would envy. Here’s the details on his choice of kit – and what it would cost to build one of your own.

Albon is one of several Formula 1 drivers who turned to Cool Performance for the core of their simracing rig. These are typically high-end gaming rigs using liquid cooling for top performance with minimal noise.

If you’ve got £41,700 to spare, Cool Performance will build you a half-F1-car simulator. Albon’s build is slightly more modest than this, but still costs more than a family hatchback.

Albon’s system is built around a Pro-Sim Evolution F1 rig. This is a serious set-up already used by some teams in Formula 2 and other junior categories. The hefty, 120 kilogram aluminium frame offers a wide range of adjustments to tailor it to different drivers and the cars they want to simulate.

Electronically adjustable pedals allow Albon to raise them high as they would be in his real-world Red Bull RB16. The pedals themselves include a hydraulic braking system and adjustable gas spring throttle which Pro-Sim claim are “the most accurate and adjustable pedal system available anywhere”.

The brake pedal can take a 200kg hit for those big stopping zones which is important. Albon’s team mate Max Verstappen almost lost a 24 hour virtual race at Spa last year when the brake pedal failed on his sim.

The driving seat position and steering wheel can also be finely tuned and, of course, these items are also top-quality pieces of kit.

The price tag, including some of the hardware detailed below, is an eye-watering £29,220 after tax.

Albon’s simracing steering wheel wouldn’t look out of place on a real F1 car. He wields a Cube Controls Formula Pro which includes a mixture of buttons, F1-style rotary switches and a multi-directional joystick.

Four paddles on the back of the wheel allow for a launch control-style clutch system and the whole thing weighs less than a kilo, thanks in part to the front plate being made from carbon fibre.

The wheel is plugged into a professional grade force feedback system manufactured by Leo Bodnar Electronics and used for a wide range of simulator applications including racing cars, military vehicles and heavy good vehicles (so, perfect for Euro Truck Simulator 2 then).

If you want to upgrade your steering wheel base to match Albon’s, one of these will cost you over £2,500 (when they’re back in stock).

Picture quality is not the only important factor here but refresh rate to ensure smooth, lag-free play. While Albon’s rig was supplied with three monitors (not pictured), he chose to disconnect two in order to configure his system for streaming.

Are you into simracing? How does your set-up compare to Albon’s? Have your say in the comments.