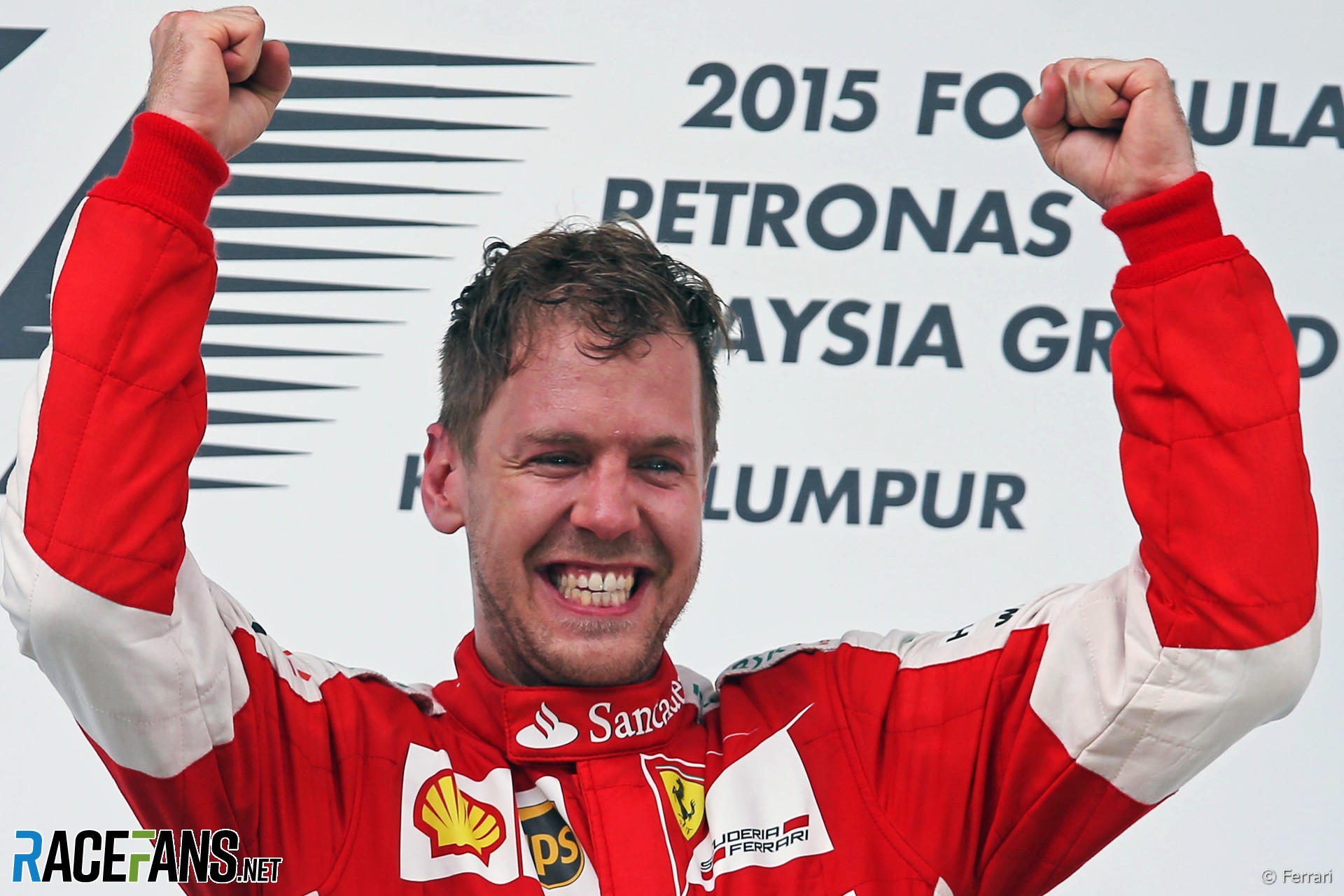 When Sebastian Vettel left Red Bull for Ferrari in 2015 his intentions were clear. The four-time world champion wanted to follow in the footsteps of his childhood racing hero Michael Schumacher.

Five seasons and 101 starts later, Vettel has won 14 races in red but no championship. Today he and Ferrari confirmed they will part ways at the end of this season.

Vettel was the most successful driver competing in Formula 1 at the time of his move to Ferrari. His tally of four would championships meant he had as many titles as Lewis Hamilton and Fernando Alonso put together.

But the introduction of V6 hybrid turbo power units in 2014, and the arrival of new team mate Daniel Ricciardo, had halted Vettel’s winning ways. That season was his first full year in F1 without registering a win.

Ferrari’s fortunes were at a low ebb as well. The team had also endured a win-less 2014 – their first such season since 1993 – and team leader Fernando Alonso lost patience with them, throwing his lot in with McLaren-Honda.

But the partnership between F1’s longest-running team and a driver with immense passion for and knowledge of the sport’s history gelled immediately and, most importantly, delivered on-track. Vettel won his second start as a Ferrari driver at Sepang in 2015.

Together they added two more wins over the course of the season and Vettel remained an outside threat to the dominant Mercedes pair until the final third of the championship season. He only lost second place in the championship to Nico Rosberg with three races to go, and ended the year with more than twice as many points as team mate Kimi Raikkonen. RaceFans named him our driver of the year, and so did our readers.

After this encouraging start, much was expected from the partnership in 2016. Instead the team suffered a dismaying setback. Vettel failed to win a race, partly due to retirements, though Ferrari made little appreciable headway in narrowing their deficit to the all-conquering silver cars.

Worse for Vettel, his former team Red Bull took the fight to Mercedes instead, winning twice and beating Ferrari to second in the constructors championship. Ricciardo relegated Vettel to fourth in the drivers’ standings.

Unusually Vettel, typically a one-lap ace, was out-qualified over the year by Raikkonen, who for all his abilities has seldom been considered a qualifying specialist. Theories abounded that Ferrari’s focus on the opportunity afforded by new aerodynamic regulations for the upcoming season had been a distraction from their 2016 campaign.

If so, their performance at the start of 2017 justified that decision. Ferrari made a significant step forward and Mercedes faced their first serious competition for the championship.

Victory in the season-opening race at Melbourne, and two more wins over the opening six rounds, put Vettel ahead in the points and gave him a serious chance of preventing Hamilton from matching his tally of four world titles. The rivalry between the pair intensified in Azerbaijan where Vettel, mistakenly believing Hamilton had brake-tested him, swiped into the side of his rival’s car.

This was the second time in the space of a few months Vettel had visibly lost his temper. In Mexico the previous year he launched into an astonishing, expletive-landed tirade at race director Charlie Whiting over a penalty decision. It hinted at the pressures Vettel was grappling with under the intense scrutiny experienced by Ferrari drivers, especially those who arrive with multiple titles in their pocket and the expectation of more to come.

Vettel only won one more race in 2017. A potentially vital win, and a chance to regain the championship lead from Hamilton, was in the offing when he put his car on pole position in Singapore. But he collided with Raikkonen and Max Verstappen on approach to turn one, eliminating all three. Hamilton took the win and a big step towards title number four, which he clinched in Mexico.

The 2018 started even more promisingly for Vettel, as he won the first two races of the year. But a series of errors let Hamilton in to become the first driver since Schumacher to win five world titles.

Needless grid penalties in Austria and Austin, collisions with Bottas (at Paul Ricard), Hamilton (Monza), Verstappen (Suzuka) and Ricciardo (COTA) added up to a huge number of points squandered.

But the most painful error came at Vettel’s home race. Leading in slippery conditions, the Ferrari driver skidded into a barrier in the Motodrom, clearing the way for Hamilton to win from 14th on the grid. Vettel ended the year a distant 88 points behind his title rival, runner-up once more.

Meanwhile at Ferrari the tectonic plates were shifting. The unexpected death of president and CEO Sergio Marchionne in July that year shook the team. Mattia Binotto, Marchionne’s preferred replacement for team principal Maurizio Arrivabene, took up the role ahead of the 2019 season.

There was a change in the second seat as well. The reliably compliant Raikkonen was replaced by Charles Leclerc, who had dazzled in his first F1 season at Ferrari’s customer team Alfa Romeo. From their first race as team mates he threatened to upstage Vettel, and did so at their second race together in Bahrain, where he shrugged off the team’s insistence that he wait two laps before overtaking their number one driver.

The rivalry between the pair intensified over the second half of the year as Ferrari became contenders for victory. After scoring his first victory at Spa, Leclerc added a second at Monza but vexed the team by failing to heed their running order instructions during qualifying. An unhappy Vettel spun in the race, clumsily rejoined the track and collided with Lance Stroll before finishing outside the points.

A much-needed win came Vettel’s way in Singapore at Leclerc’s expense, aided by a questionable strategy call by the team. It was his only victory of the year. More acrimony followed between the pair.

In Russia it was Vettel’s turn to ignore the team, repeatedly spurning calls to wave Leclerc through into the lead following a choreographed start. Then in Brazil the pair collided as Vettel squeezed Leclerc while re-passing his team mate. It was an incident which had strong overtones of Vettel’s 2010 collision with Red Bull team mate Mark Webber, only on that occasion Vettel had been the team’s upcoming young star.

It spoke volumes about Ferrari’s priorities that they extended Leclerc’s contract in December before agreeing new terms with Vettel. In his announcement today, Vettel spoke about how he had reassessed his priorities in the light of the disruption the pandemic has caused to the start of the 2020 F1 season.

What are those new priorities? Is he contemplating retirement? This remains to be seen.

For now, Vettel will join Alain Prost and Fernando Alonso as multiple champions who arrived at Maranello and left before taking another title. Unless, of course, he bags a swansong triumph in this uncertain season which lies ahead.

Even if that does happen, Vettel’s hopes of building a Schumacher-style empire at Ferrari, achieving multiple title successes which propel him beyond the benchmark achievements of his childhood hero, are over.