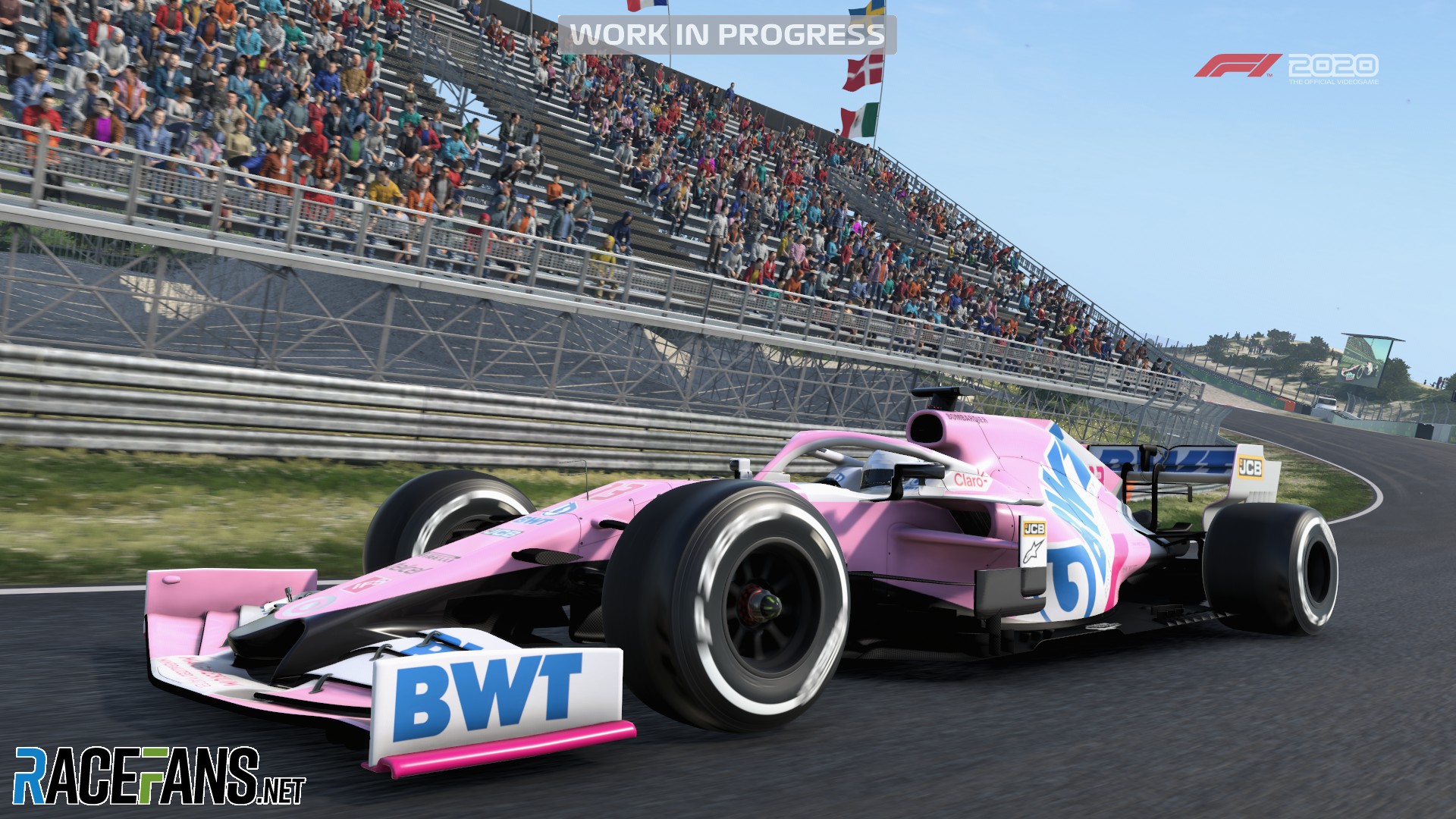 RaceFans readers sent in dozens of questions about F1 2020. Here are answers to a selection of them, including feedback from Codemasters’ Formula 1 game director Lee Mather.

Why doesn’t the PC version support virtual reality since the engine can? Dirt Rally has VR support.
Rick Hendrikse

Are we finally going to get VR?
Sergio Perez

“It’s very difficult to bring a game that runs like Formula 1 with such an intense physics engine and graphics engine to run VR,” says Mather. “So VR isn’t something we’re going to be able to do this year at the moment.”

Being able to play online with friends who have different systems is a feature Codemasters are keen to introduce, says Mather.

“That’s a very hot topic of discussion. We’ve been doing some trials and tests. It’s not going to happen in ’20 but it’s something that very much we’re investigating.

“That’s, again, a really fundamental change to the underlying structure of the game. But it’s obviously something that’s gaining great pace. I think it’s fantastic, I’ve been able to play Call of Duty against all of my friends across all platforms.

“So that’s something that we’re doing a lot of very serious investigation into for the future.”

Many of you wanted more details about the game’s new My Team feature. This allows you to create an 11th team in the game, customise it and manage it over 10 consecutive seasons.

You also get to hire drivers to race alongside you in the team, which opens up many interesting playing opportunities:

“Will you be able to sign F2 drivers in the My Team career?”
Yuri

The Formula 2 field is available for you to hire a driver from the start of the game, says Mather, though you’ll need to ensure you have enough money to hire the driver you want.

“There’s going to be a full driver market which you’ll obviously engage with as you play through the game.”

“Will you have to drive yourself or can you pick two AI drivers and just manage the team?”
Bradley Downton

“You have to participate as a driver,” Mather confirms. “That’s key to us.

“It’s something that we always said we would do. We’re a racing game with a management element, we’re not a management game. So it’s a great addition, it gives you all the flavour of running a Formula 1 team.”

“When creating your own team and choose a team mate is it only F1 and F2 drivers or can you create your own?”
LiamTSH96

There is a third source of drivers available if your team is struggling and you can’t afford one of the real-world drivers.

“It might be that I’ve exhausted all options, I’m absolutely broke, I can’t even afford to renew the contract with my driver. At that point, we bring in one of the fictional drivers that we have – the drivers who drive the classic cars.

“So if you’ve reached that point and you’re really struggling, you get one of those drivers. And they’re not great so they’re not going to do the best job for you, but they’re there to fill a seat and to keep your team in business.”

“How customisable are the cars going to be in My Team mode and will you be able to customise the team overalls?”
Jamie Hubbard

There are extensive personalisation options available in My Team. “You’ll be able to select the livery that you want to use on the car from a wide selection, which will be increasing once the title’s out as well.

“You’ll then do the same for the environment that your team is going to be set in. The facilities are heavily branded for Formula 1 teams so you’ll want to select your colours for that as well so you can set the colours for the facilities you load.

“You’ll then want to pick the identity of your team so you’ll go for your badge so you’ll select the badge and again you can change the colours and also the styles of the badges so they might be embossed, they might be 3D. And again, that gives you that level of personalisation.”

“Will it have a livery editor for your own team?”
Markus

The livery editing options are handled in-game which allows for some controls to be placed on what players can do. For the same reason, your My Team creations are restricted to only including fictional sponsors.

“Basically you can’t see Shell and Petronas on a car together, you can’t go placing a Rolex logo in fluorescent pink, for example. There’s very strict guidelines around how companies handle their logos.

“That’s something that we felt would actually take away so much personalisation from the player if they were restricted in what they could do in that way. So we have a much broader range of sponsors that we can use in the game that we’ve created. And it gives us more freedom to actually attach different goals to them and allow the player to tailor the way they look on their car.”

Can we make slight alterations to the ‘FOM car’ in My Team? Like nose shape, side pods, barge boards etc, even if only a few options.
Stephen

The ‘My Team’ car is a fixed model, Mather explains: “We can only have a limited number of vehicle models. The one that we’re using is the same model that we created in a partnership with Formula 1.

“So in partnership with Ross [Brawn, F1 managing director] and his team again we’ve got a spec car, which is the chassis that you’ll be placing your livery on.”

Career mode and other races

Are we able to do a full F2 season in the career mode?
Josef

The option to do a full season in F2 before entering F1 now exists. You can also skip F2 entirely or just do a few races.

There hasn’t been any change to the race distance options on the preview version we tested.

“Can you choose which 10 or 16 races will make up a shortened career season?”
JDWrighty

Yes, you can choose from all 22 tracks.

Are there any classic tracks in the game?
IwanThomas

Will classic circuits be included (Hockenheim, Istanbul, Imola etc) be included and possible to include in career mode?
JDWrighty

Are we going to get classic tracks?
AlexM_49

If F1, when it resumes, races at a venue not on the original 2020 calender, will it be added to the game in an update?
Ryo Gazuki

There aren’t any ‘classic tracks’ in F1 2020, partly because of the time involved in creating Zandvoort and Hanoi from scratch for this year’s game:

“Tracks are a vast undertaking for us,” says Mather. “Building two tracks in a year is a significant amount of work.

“Bringing in classic tracks is always something we discuss, it’s something we did previously on the previous generation. But obviously we’ve brought in Zandvoort and Hanoi this year which are both enormous circuits.

“Roughly a track [takes] around a year of man-hours to build. So to build two tracks, obviously we have a team of people that work on them. It’s still a huge amount of effort and time that it takes to do that.”

“As graphics are getting to the point of photo realism, any chance Codemasters will start to offer a ‘more realistic’ physics mode and laser scan the tracks?”
Sergio Perez

Codemasters used laser-scanned Light Detection and Ranging data [LIDAR] for Zandvoort. But Mather points out there are limitations to using it for other circuits, including ones they have already built:

“We do have LIDAR data for other circuits, but to obviously rebuild an entire track from that data again is another year of man-hours to do so. So LIDAR isn’t available for all tracks.

“There’s a lot of people [who] say LIDAR’s the silver bullet and it’s great, it’s amazing. It’s not always the case: The quality varies, the way that it’s captured varies, it’s not always perfect. We’ve certainly had LIDAR data that would have given us tracks that weren’t as good as the ones we have in game.

Are we going to get more classic cars other than what is in the Schumacher DLC?
Aaron Hutt

Does the B194 have a secret traction control code?
Clay Woolcock

Apparently not – but we haven’t driven it yet…

Thanks for your questions

We’ve answered as many as we’ve been able to so far. Some of them we won’t be able to answer until the final version of the game appears, so keep sending your questions in and we’ll answer another batch later in the year.

More videos from our first play of F1 2020 are being published today and over the coming days. Find them all on RaceFans’ YouTube page: