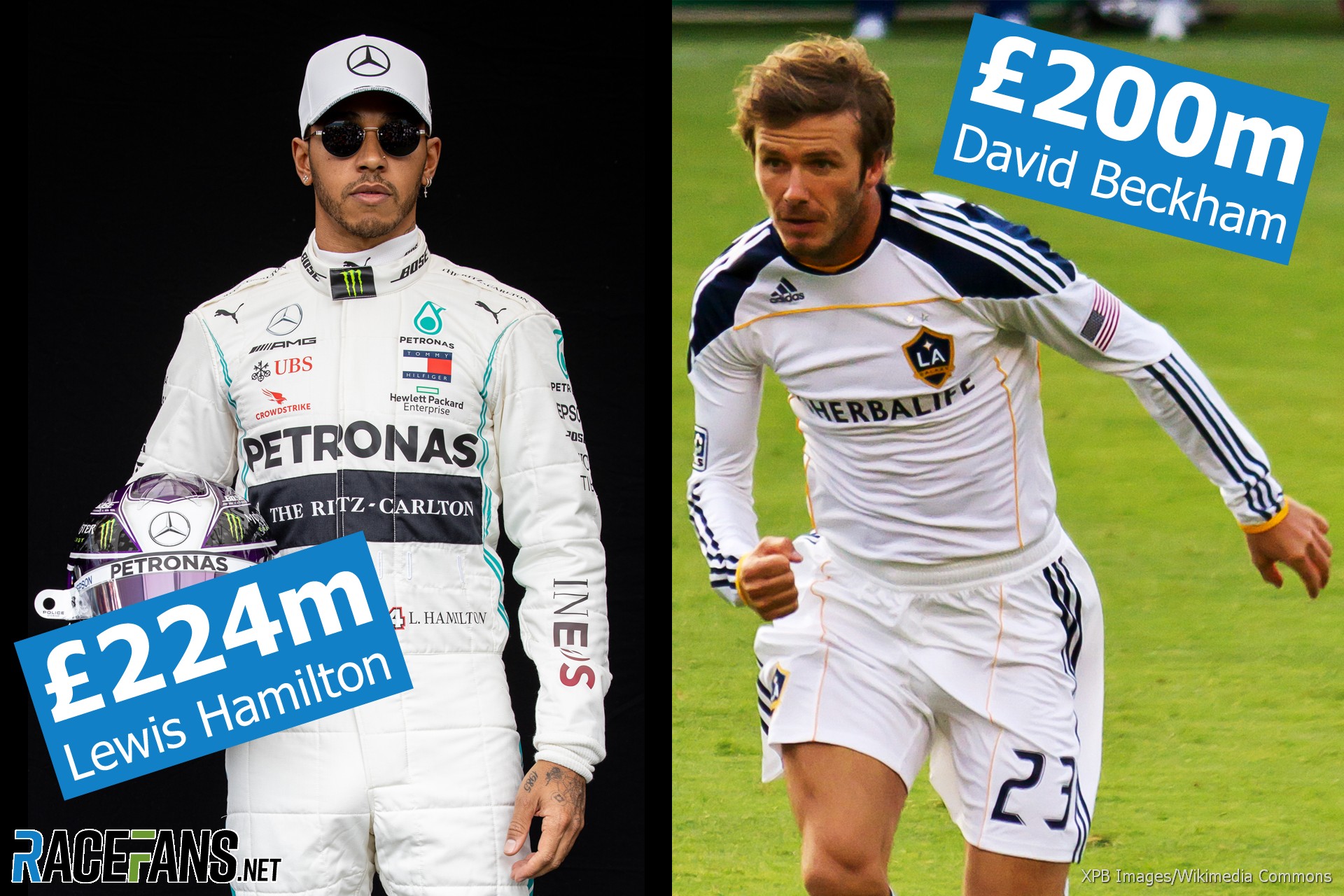 Lewis Hamilton has become Britain’s richest sportsperson after more than doubling his wealth in the space of four years.

The Sunday Times Rich List, published last weekend, estimates Hamilton’s total net worth at £224 million. His wealth has exceeded the previous high recorded for a British sportsperson – footballer David Beckham was assessed to be worth £200 million in 2013.

Hamilton, 35, came from a modest background: His father Anthony supported his early racing career by working three jobs at once. But in 1998, aged just 13, Hamilton landed a massive opportunity when McLaren appointed him as a junior driver.

He quickly worked his way through lower formulas, won the GP2 (now Formula 2) title at his first attempt, and in November 2006 McLaren made the surprise move of placing the rookie in their F1 team for the following season.

Hamilton almost won the world championship at his first attempt in 2007, falling shy by a single point. Following that successful first season in a front-running car Hamilton inked a new five-year contract with McLaren – much as Charles Leclerc did at Ferrari last December.

The following year Hamilton delivered his first world title, becoming the sport’s youngest-ever champion at the time. He was already estimated to be worth £15 million and his net worth rose steadily over the following years.

He did not, however, win any further titles as a McLaren driver, despite being in contention for the 2010 and 2012 crowns. During that final season he lost faith in the team and succumbed to overtures from Niki Lauda and Ross Brawn to join Mercedes (though the team initially had Nick Heidfeld in mind for the seat alongside Nico Rosberg).

Hamilton has accumulated both wealth and silverware since he joined Mercedes in 2013. In the space of seven years he has won five world championships and 63 of his 84 career wins.

His move to Mercedes has been both lucrative and liberating. The team has allowed him greater freedom from his racing obligations to pursue other interests. His tie-up with fashion designer Tommy Hilfiger brought the brand back into Formula 1 as a sponsor. Last year he launched a chain of vegan fast food restaurants called Neatburger.

Having originally signed a three-year deal to drive for Mercedes, Hamilton first extended it by a further three years, then signed a new two-year deal in 2018. As a result, his fortune is accumulating at a faster rate than ever since winning his sixth world championship last year, growing by £37 million over the past 12 months.

Hamilton’s current deal to drive for Mercedes expires at the end of the 2020 F1 season. RaceFans estimates he already earns the largest salary of any F1 driver, a gap which is likely to grow following Sebastian Vettel’s departure from Ferrari.

Earlier this year Hamilton said agreeing financial terms is usually “the easier phase” of finalising a new deal. He stressed he is more concerned with ensuring he remains in a competitive seat and enjoying the freedoms his move to Mercedes delivered.

Hamilton is expected to sign a new deal to remain at Mercedes in 2021 and as far beyond as he chooses, though he admits he is moving into ‘potentially my last period in the sport’. Nonetheless, he’s at the peak of his earning potential, and clearly has no shortage of ambition for his life beyond F1 once his racing days are over.

Aside from his non-motorsport interests, he has spoken passionately about wanting to help drivers from under-represented backgrounds such as his into racing, which may also provide a use for the fortune he has accumulated throughout one of the most successful careers the sport has ever seen.