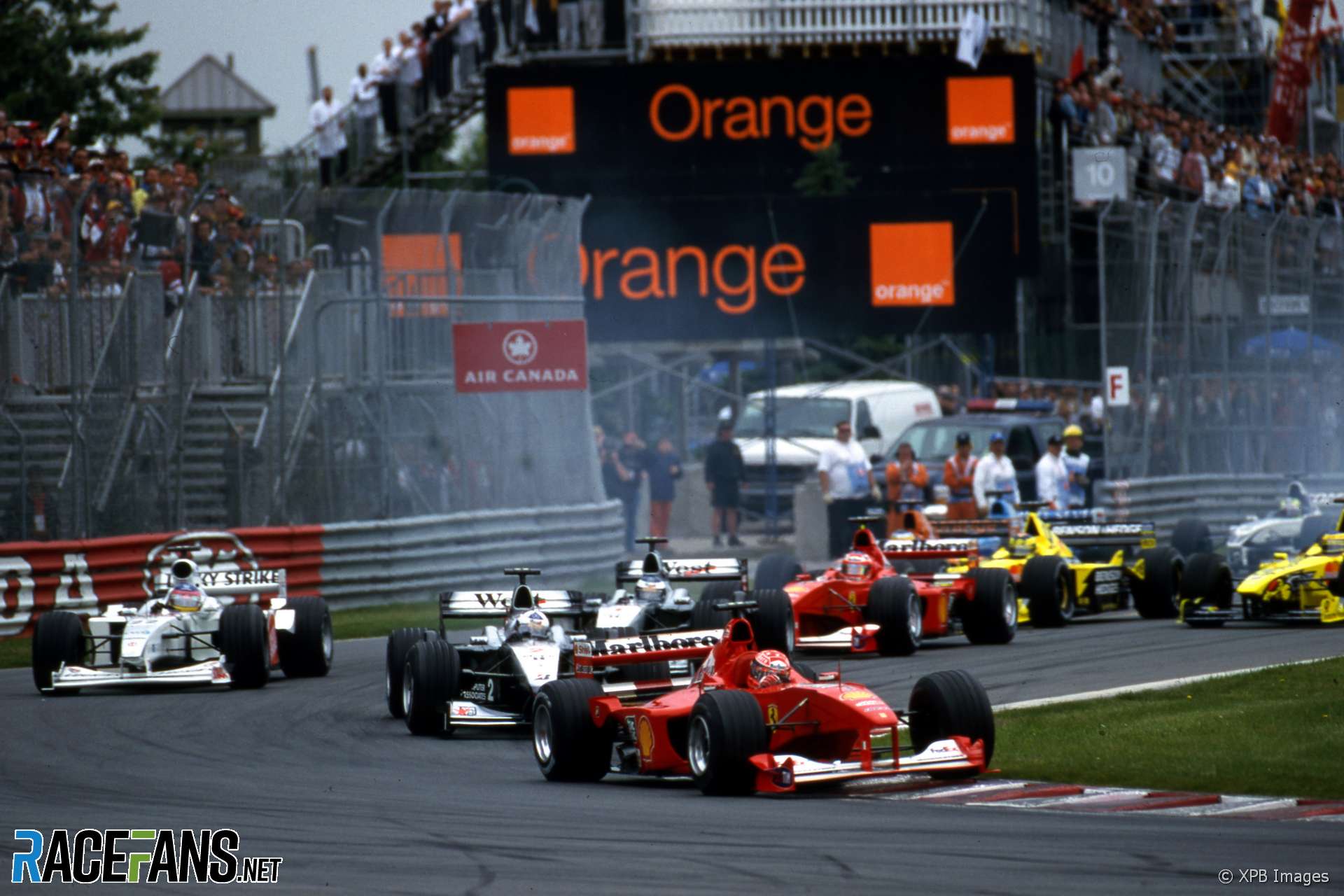 Michael Schumacher’s shock retirement while leading in Monaco had closed up the 2000 championship.

From there the teams headed across the Atlantic to Montreal and the Canadian Grand Prix at Circuit Gilles Villeneuve.

Schumacher continued to the lead the championship from twice-winner David ‘call me DC’ Coulthard and his McLaren team mate Mika Hakkinen, the reigning world champion’s lacklustre start to his title defence having continued in Monaco. While the Ferrari driver had been unlucky in Monaco, mechanical dramas had afflicted all three over the opening rounds.

Several teams had fettled their low-downforce packages for the track in a test at Monza. Ralf Schumacher’s was participation in the race was initially in doubt as he recovered from injuries sustained in his Monaco crash. After free practice the Williams driver decided he was well enough to race on.

F1’s visit 12 months earlier had been one of those incident-filled (read: crash-strewn) affairs which has often made this a lively round. Shunts for Schumacher, Damon Hill and Jacques Villeneuve prompted the barrier at the final chicane to be dubbed the ‘Wall of Champions’.

By those standards, and those of the season to date, practice was relatively uneventful. Schumacher and the McLarens shared the fastest times as usual, and behind them rookie Nick Heidfeld was one of few to find the barriers.

In warm, dry conditions which many would remember fondly in 24 hours’ time, Schumacher claimed his third pole position of the season. However his Monaco misfortune had been the 12th race running which the driver who started from pole position failed to win.

Schumacher prevailed in a nip-and-tuck contest with Coulthard, who led the way initially, only for Schumacher to deny him by nine-hundredths of a second with his final effort. Row two followed the same pattern with Rubens Barrichello clear of Hakkinen, the champion unhappy after encountered traffic and would have work to do come race time.

Row three was shared by Jordan’s Heinz-Harald Frentzen and local hero Villeneuve, one of a very select club of drivers to race at circuits named after their father, in the BAR. They were also shadowed by their team mates: Jarno Trulli ahead of Ricardo Zonta.

Further Jos Verstappen hit trouble (specifically, the wall) bringing out the red flags. He took over the spare Arrows and took 13th on the grid. At the back of the pack the Minardis were split by Heidfeld, whose torrid debut season in the Prost continued.

Warm but cloudy conditions greeted the race day crowd and drivers. The drama started on the formation lap.

DC (David Coulthard, not magician David Copperfield) stalled on the grid, but was restarted by his McLaren mechanics before he was passed by the rest of the field, enabling him to retake his original starting position.

At the lights, Coulthard made the better start, but Schumacher was able to fend him off on the short sprint the first corner. Hakkinen jumped up to third ahead of Barrichello, but not for long as Villeneuve made another flying start was third by the end of the first lap. In a break with tradition, there wasn’t a first corner pile-up, although Eddie Irvine stalled on the grid as was wheeled to the pit lane to be restarted.

The early stages saw a tense battle between Schumacher and Coulthard, the pair trading fastest laps as they tried to pull clear of the rest of the field. Villeneuve held onto third, providing future inspiration for Trulli by holding up a train of cars behind him.

The excitement at the front was punctured as McLaren were informed that DC (David Coulthard, not nineties zeitgeist author Douglas Coupland) would have to serve a 10-second stop-and-go-penalty as work had been done on his car within 15 seconds of the start of the formation lap. After serving his penalty on lap 14, Coulthard rejoined in 10th place.

This left Schumacher with a handy advantage, while some way behind him Villeneuve, Hakkinen and Barrichello disputed second. This battle soon became complicated as light rain started to fall making the surface slippery. The tricky conditions caught out Coulthard who lost a further three places spinning on oil left by Verstappen’s Arrows.

Finally on lap 25 Barrichello moved clear of Villeneuve. He started to gradually close in on his team mate, although the likelihood of Ferrari allowing him to pass Schumacher was somewhere between zero and slightly less than that.

Hakkinen continued his efforts to pass Villeneuve, eventually making a move stick on lap 35. Frentzen’s race had ended two laps earlier with broken brakes, leaving Trulli the next threat to the BAR.

Villeneuve had given Schumacher enough of a lead that the Ferrari driver held first place when he made his first pit stop on lap 34. The team tweaked his wing settings to reflect the changing conditions. The remaining front runners made their stops in the three laps around lap 40, but all were back in soon afterwards when the rain suddenly intensified.

By then Barrichello had closed to within 15 seconds of Schumacher. Having lost time waiting a lap to pit in the rain at the Nurburgring, he opted to follow his team mate into the pits, despite the extra time it would inevitably cost him. By the time he resumed the pair were separated by half a minute and Giancarlo Fisichella’s Benetton.

Barrichello picked up second place in short order, then from lap 56 began slashing into Schumacher’s lead, taking over two seconds off him on some laps. Schumacher had a brake problem, which at one point sent him through the run-off area at turn one.

By lap 68 Barrichello was within four second, but Schumacher was in no real danger. Barrichello had already been ordered by the team to keep his position. He followed the leading Ferrari home, the pair crossing the line just a tenth of a second apart.

The challenging conditions provoked drama behind them. Villeneuve, who’d starred early in the race, woefully misjudged a move on Ralf Schumacher, wiping out their pair of them. He apologised for his error. The two Pedros – de la Rosa and Diniz – tangled, putting the Arrows driver out with a broken wheel.

But de la Rosa’s team mate Verstappen atoned for his Saturday crash with a superb drive through the field to fifth, beating Trulli and DC (David Coulthard, not Swiss skier Didier Cuche).

Schumacher’s fifth win from the first eight races meant he regained the ground he had lost in Monaco as the two McLaren drivers failed to capitalise. And thanks in no small part to his compliant team mate. “He is a good man and one day I will pay him back,” said Schumacher.

But over the coming races, Schumacher’s grip on the championship leader would come under serious pressure.

34 comments on ““One day I will pay him back”: Barrichello follows Schumacher home in Canada”