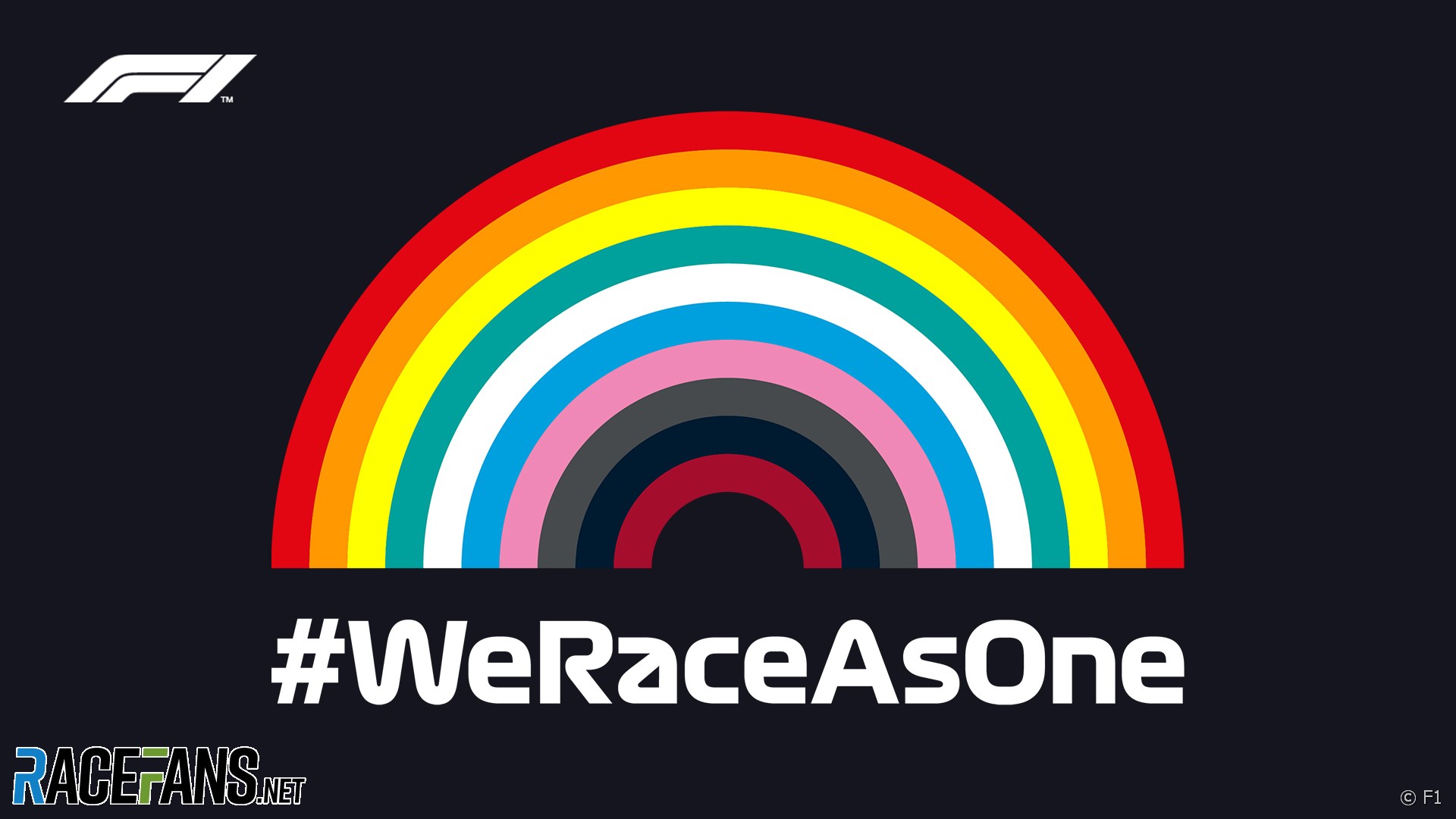 Formula 1 is launching a new initiative called ‘#WeRaceAsOne’ including a new rainbow logo which will feature on all cars when the season begins next week.

The programme recognises “the two major issues dominating society’s consciousness at this time, Covid-19 and inequality”, said the sport in a statement.

“We will use our opening race to thank people around the world for the incredible strength and fortitude they have shown against a global pandemic. Everyone from key workers through to families and individuals that have endured lockdown to tackle the virus deserve our thanks and gratitude.

“Equally we want to use our restart to show that we as a sporting community stand united against racism and are doing more to address inequality and diversity in Formula 1.”

The programme will be marked from the season-opening Austrian Grand Prix next week with the the launching of a new ‘F1 Rainbow’ in all the teams’ colours which will feature on every car and around the circuit.

Part of the initiative will involve the creation of a task force to gather feedback from those inside and outside the paddock, including drivers, “and make conclusions on the actions required to improve the diversity and opportunity in Formula 1 at all levels.”

F1 intends the programme to make a long-term difference to the development of the sport. “It will not be a one week or one-year theme that disappears as issues disappear from headlines, it will underpin the Formula 1 strategy to make a tangible difference in our sport and society.”

Lewis Hamilton has spoken out strongly against racism in recent weeks following the rise of the Black Lives Matter movement in response to the death of George Floyd in America. The reigning world champion last weekend announced his plans for The Hamilton Commission to promote diversity in motor racing.

On Sunday Hamilton shared images of himself attending an anti-racism demonstration in London. “Went down to Hyde Park today for the peaceful protest and I was so proud to see in person so many people of all races and backgrounds supporting this movement,” he said. “It was really moving. I’m feeling extremely positive that change will come, but we cannot stop now.”

Formula 1 chairman and CEO Chase Carey said: “Our first race in Austria at the start of July is a big moment for our sport after nearly four months of no racing. While it is an important moment for the Formula 1 community it is also a time to recognise the issues that are bigger than any one sport or country.

“The ‘#WeRaceAsOne’ initiative we have launched today, in support of the ‘#PurposeDriven’ Movement launched by the FIA last week, is our way of saying thank you to the bravery and unity everyone around the world has shown during this unprecedented time. It will also be a platform for Formula 1 to come together and achieve results against the most important issues facing us as a sport and the world.

“That is why at our first race in Austria Formula 1 will stand united to say loud and clear that racism must end.”

Several F1 teams have already voiced their backing for the initiative. “We fully support Formula 1 on the ‘#WeRaceAsOne’ campaign as we return to racing,” said McLaren Racing CEO Zak Brown.

“Formula 1 and McLaren have a truly worldwide audience, and we recognise that our return to the track is a huge opportunity for our sport to make an impact at a global level, helping those most affected by the Covid-19 crisis and standing together against the blight of racism, as we work steadfastly to build an even stronger culture of diversity, inclusion and equality in our team and our sport.”