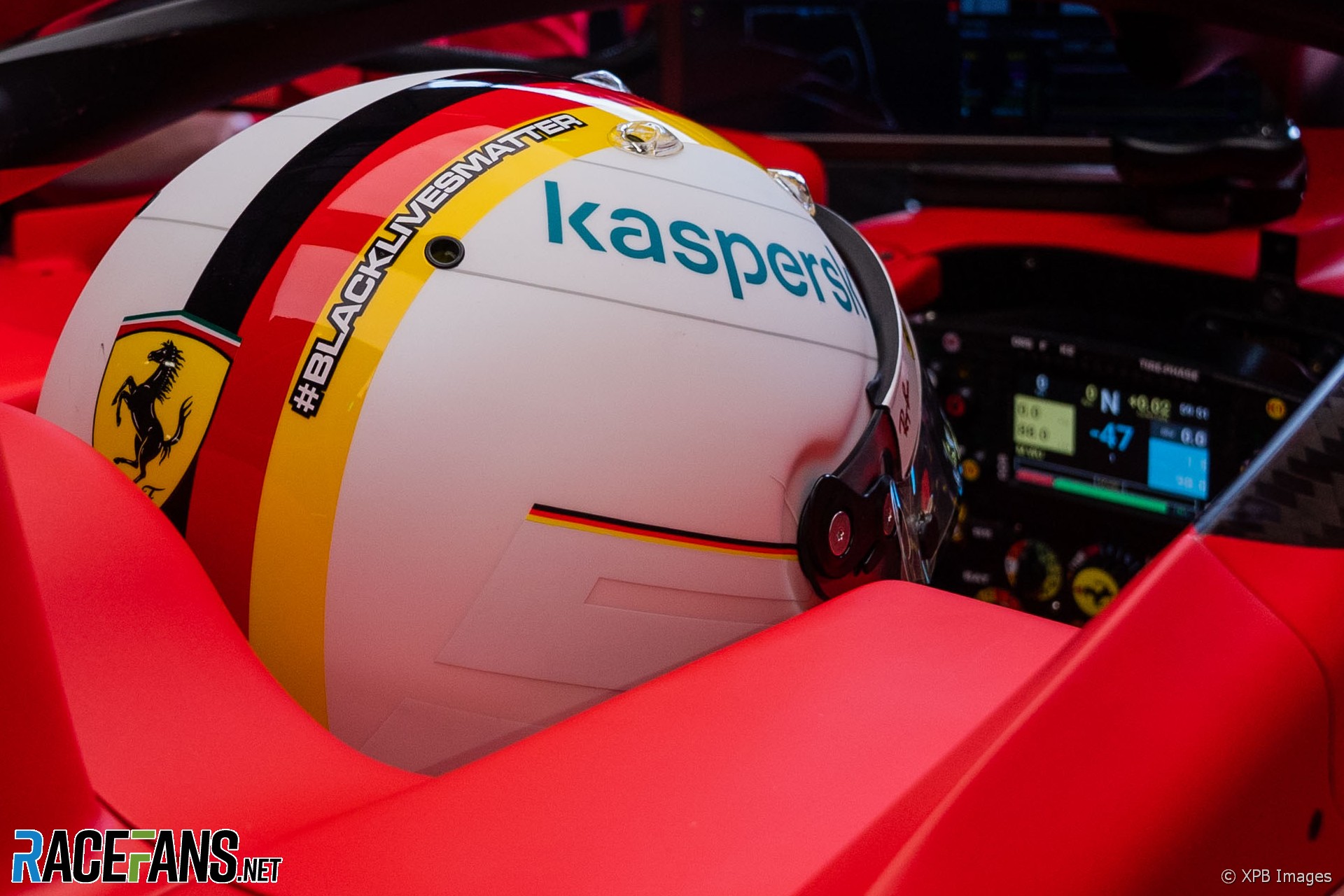 Sebastian Vettel has joined Lewis Hamilton in showing his support for the anti-racism movement Black Lives Matter at this weekend’s Austrian Grand Prix.

The Ferrari driver, who is not active on social media, added the campaign’s hashtag to his helmet during today’s practice sessions at the Red Bull Ring.

Another driver who has voiced his support for Black Lives Matter is Daniel Ricciardo. In a post on social media on Friday, Ricciardo described how he decided he had to speak out against racism.

“The more I read, the more I looked for more information, you realise that institutional racism is endemic, worldwide, generational,” he wrote. “My own backyard is not immune. The Black Lives Matters protests in the US were prompted by the George Floyd death; the marches in Australia’s cities that followed identified the more than 430 deaths of indigenous Australians in custody just in my own lifetime. Different focuses in different countries, but really they’re all tied together to the same problem.

“I’ll never be able to know what it means to be black, what it means for countless black people to live every day with racial discrimination being a factor in their lives, no matter what part of the world they live in. I’m a white kid from Perth who grew up in the suburbs in an Italian-Australian family who drives cars around in circles for a living. I have no context in my own life to know how that level of racial discrimination feels.

“But that doesn’t stop me from wanting to learn more. It’s something all of us can do – ask questions, have those awkward conversations, learn from people who actually live this, who know this subject better than I ever could.”

Ricciardo said he has “perhaps been too naïve in the past, too distracted, too unaware” about social issues. “But another feeling is that this is perhaps a teaching point, a line in the sand, an opportunity. I’m generally an optimistic person in every aspect of my life, so I see this as perhaps a chance to accelerate change, to shift attitudes, to educate, to work at creating a ‘new normal’.

“Have I made mistakes in the past out of not knowing the facts? Sure. But I’m trying to do something about it.

“Is being a knowing bystander who says nothing enough? Absolutely not. Simply saying or thinking, “oh, I’m not a racist” and leaving it at that… that’s not enough.

“You have to be an advocate for change and someone who strives to make things better and, for me personally, do that from a position of being educated before I open my mouth, get on social media, give an answer when someone puts a microphone under your nose.”