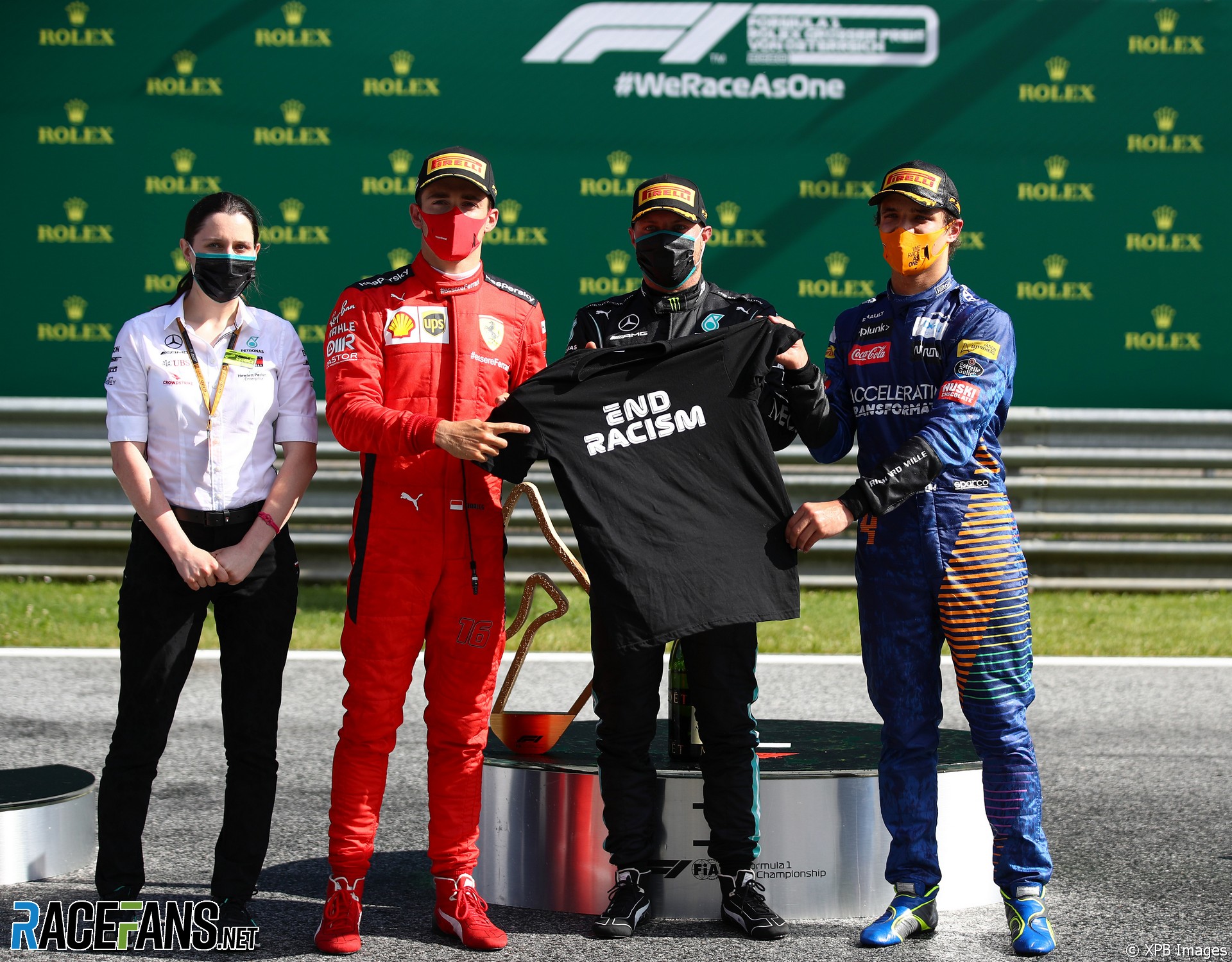 Lewis Hamilton denied demanding rival drivers join the pre-race ‘take a knee’ protest at yesterday’s Austrian Grand Prix, stating anti-racism is a “much bigger issue” than whether individuals participate in a single gesture.

All 20 drivers wore anti-racism T-shirts on the grid and Hamilton was among the 14 who also symbolically ‘took a knee’, a gesture made famous by American football player Colin Kaepernick four years ago. However he made it clear he did not “request or demand” any of his fellow drivers join him.

Hamilton said the gesture was suggested by two other drivers, one of which was Sebastian Vettel, who like Hamilton raced with a ‘Black Lives Matter’ slogan on his helmet. All 20 drivers wore anti-racism T-shirts during the pre-race ceremony, and Hamilton said he was comfortable with others choosing not to take a knee.

“Honestly I don’t know everyone’s different reasons or opinions,” he said after yesterday’s race. “I am aware of some opinions from some of the drivers but that’s more a private thing and I wouldn’t like to share. But I think ultimately nobody should be forced to into a scenario where they have to kneel.”

Hamilton dismissed claims he had attempted to coerce drivers into ‘taking a knee’.

“There is a story, at least one out there, that is really incorrect,” he said. “I never requested or demanded anybody to take the knee. I never even brought it up.

“There were obviously several that said they wouldn’t. And I let everyone just say what they wanted to say and I just opened up to them and said ‘look guys, just so you know, I will be doing it, but you do what you feel is right’.

“I’m really, really grateful for those who did kneel along with me. I think it’s still a really powerful message.

“But ultimately whether you kneel or do not kneel, that’s not going to change the world. It’s a much, much bigger issue across the world than just something as little as that. But for me, personally, I think everyone had a right to their own personal choice and for me personally, that was what I felt was right to do. But I didn’t make the decision until last night.”

Hamilton distanced himself from any political connotation in the Black Lives Matter movement, stressing he supports it solely from an anti-racism perspective:

“But I think the people that are at the rallies, the people out there marching, are fighting for one cause, and that’s for the equality. And it’s not a political thing, necessarily. I think for them, that’s what I went to London, that’s what they’re out there doing. When I wear the shirt, when I speak out, that’s what I’m supporting. I’m not supporting necessarily the political movements. That’s something completely different. So I think it’s important to try and keep it separate.”

In 2017, following earlier anti-racism protests, Hamilton indicated he was considering ‘taking a knee’ at the United States Grand Prix. He did not go through with it, but yesterday admitted he regretted not being more vocal in his condemnation of racism sooner.

“This all started with Colin Kaepernick in the NFL,” he said. “I think he sat down for the national anthem and he got a lot of backlash. And then he spoke to someone, I can’t remember who it is he spoke to, his team boss or something like that, and they suggested to take the knee.

“I thought that was a really powerful statement that he made. And then he lost his job. And didn’t get his job back. And he was a great athlete.

“I’d actually spoken to him a couple of years ago, shortly after that before the US Grand Prix and I had a helmet and everything made in red with his number on the top. But back then I was kind of silenced, I was told to back down, don’t support it. Which I would say that I regret.

“So it was important for me to make sure that during this period of time I did my part.”

Hamilton said he intends to keep the campaign in the spotlight over the coming weeks. He has not decided whether he will continue to ‘take a knee’, but said he does not intend to do so during performances of national anthems.

“Whether [I’ll] continue to take a knee, I don’t know if there’s going to be opportunities to do that. I definitely don’t want to do that on national anthems.

“But I would say definitely the background, I’ll continue to support, continue to try to improve my education on the situation, hopefully encourage others.

“I really don’t want it to be the case of people feeling forced. I want people to be excited to be a part of the change and want to encourage people to really take notice and think ‘I’ve been so fortunate to not have experienced racism, but I can try to understand what it must feel like and I don’t want people to feel that way, I don’t want my kids to feel that way’. So I want to be part of the change in the future. Our kids can lead a better life quality. And that’s really what it’s all about.”

53 comments on “Hamilton: “I never requested or demanded anyone to ‘take a knee'””