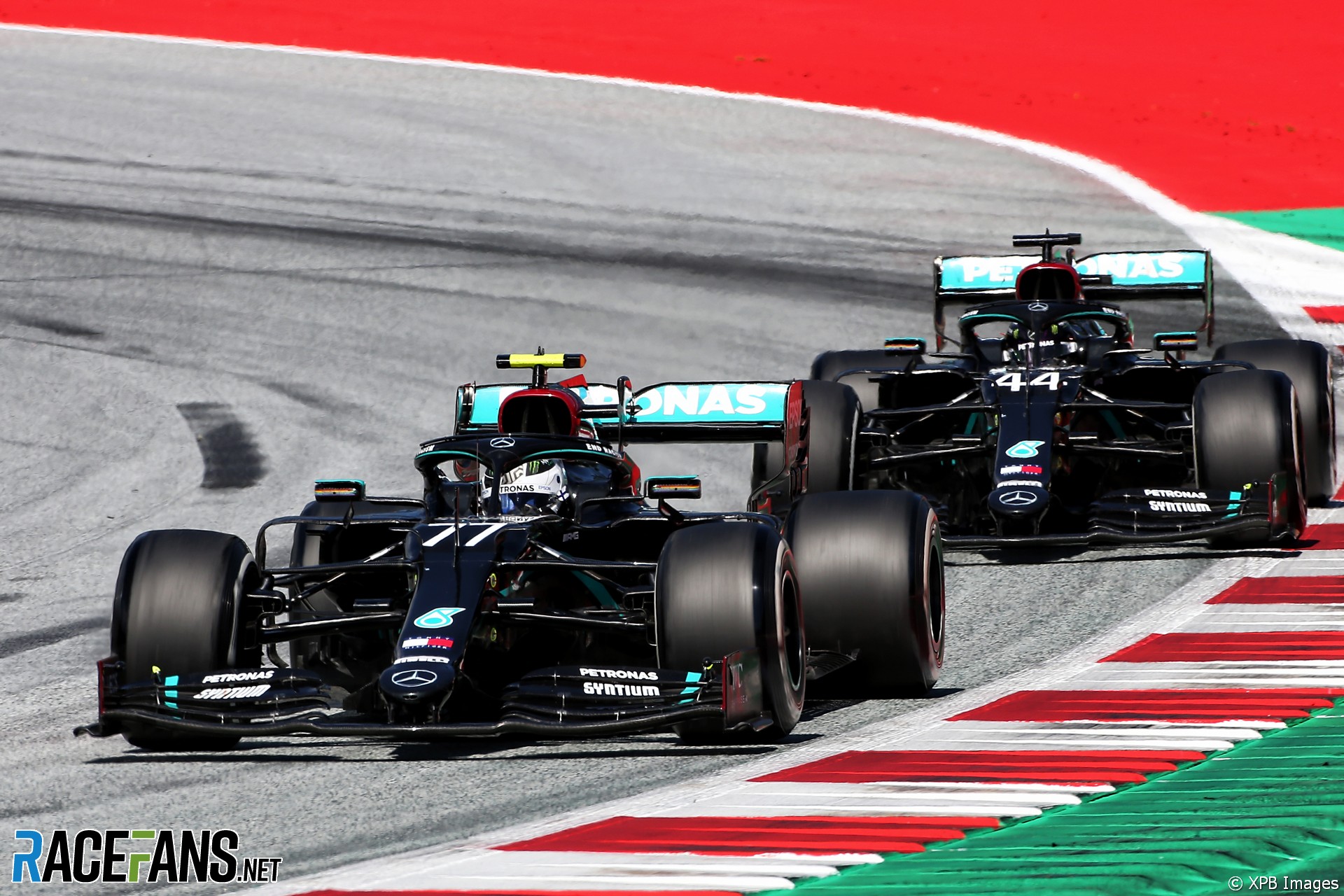 Did Mercedes throw valuable world championship points away with their tactics in the closing laps of the Austrian Grand Prix?

The W11s crossed the line first and second at the Red Bull Ring on Sunday, Valtteri Bottas ahead of Lewis Hamilton. But Hamilton’s five-second time penalty for tangling with Alexander Albon relegated him to fourth place in the final classification.

Hamilton ended the race on Bottas’s tail, the pair separated by seven-tenths of a second. Had Hamilton been just two-tenths of a second further up the road, he would have taken an extra three points. World championships have been lost by less.

After the race, Hamilton was quick to reject any suggestion Bottas might have slowed him down deliberately in the knowledge it would cost him more points.

Both drivers had also contended with reliability problems for much of the race. Mercedes told the pair to minimise their use of the circuit’s punishing kerbs which threatened to aggravate an electrical problem which could cause an “instant kill” gearbox failure.

But allowing for all this, given how close Hamilton came to finishing on the podium, did Mercedes miss an opportunity? Could they have told their drivers to lap quicker, or even waved Hamilton past Bottas, to minimise the damage of his five-second penalty?

After Hamilton’s penalty was confirmed, Mercedes told Bottas on the radio not to hold his team mate up. “Lewis has got a five-second time penalty,” he was advised on lap 66. “Need to speed up. Build that gap.”

Both drivers were also trying to claim the bonus point for fastest lap, despite the limitations on how hard they could push. Hamilton set the fastest lap on the 67th tour with a 1’07.7, but Bottas took it off him the next time by a tenth of a second.

On the 69th lap, both drivers had to back off due to double waved yellow flags at turn seven. Bottas eased off much more than Hamilton, lapping in 1’10.0 to his team mate’s 1’08.5. The gap between the pair, which had been 2.1 seconds, fell to just six tenths.

This had two consequences for Hamilton: Running closer to Bottas made it harder to improve his lap time, and also threatened to bring their pursuers within range. Having dipped into the 1’07s, their final two laps were in the low 1’08s.

Bottas also explained why he backed off so much for the yellow flags. “When you’re in the lead you, of course, want to minimise any risk,” he said. “You have to slow down at least half second for double yellows, so I did that.

“Then I knew there was going to be an opportunity to try and go for the fastest lap of the race and it would be silly, not to even though we couldn’t use the kerbs, we could at least try within the limits, so was charging the the pack as well.”

Bottas may have thought that by generously slowing down for the yellow flag and bringing Hamilton into his slipstream he could ensure he took the fastest lap bonus point instead of his team mate. He probably didn’t expect Lando Norris would take it from the pair of them on the final lap, and by doing so beat Hamilton to third place as well.

As team principal Toto Wolff pointed out after the race, “Valtteri had no idea what was going on behind him.”

But could the team have orders Bottas to let Hamilton through, knowing Hamilton would inevitably end up behind him, and limit his risk of losing points.

“You could argue that if they would have pushed completely to the end, maybe we would have retained the podium,” said Wolff.

“But that starts to get really messy. Switching them, we’ve had it in Budapest many years ago and we nearly got overtaken by Verstappen.

“This time around, the thinking that I had [and] we had was that you need to explain to Valtteri what’s going on, that there is a five second penalty and then ask Lewis in the last lap to let Valtteri pass again.

“So if Valtteri can’t keep up, you can’t let him pass. And/or if Leclerc and Norris on fresh tyres are in his gearbox then obviously Valtteri, rather than winning the race, ends up fourth. So too much complexity to do such a switch. Too much risk.”

This is logical. But the argument could be made the Mercedes should have let Hamilton take the chequered flag first, with Bottas a few seconds behind, holding up the rest of the cars, to maximise the team’s result.

There is a danger here, too, however. Five-second penalties are not chiselled in stone. While they have rarely, if ever, been overturned in F1, they have been on several occasions in supporting races, notably with Juri Vips and Liam Lawson in Formula 3 last year.

If Mercedes had told Bottas to let him team mate past, and the stewards had done a U-turn in their penalty decision on Hamilton – which wouldn’t have been their first of the weekend – Mercedes would have inadvertently cost Bottas a victory. That’s not something a team would ever like to contemplate.

40 comments on “Could Mercedes have used team orders to get Hamilton on the podium?”