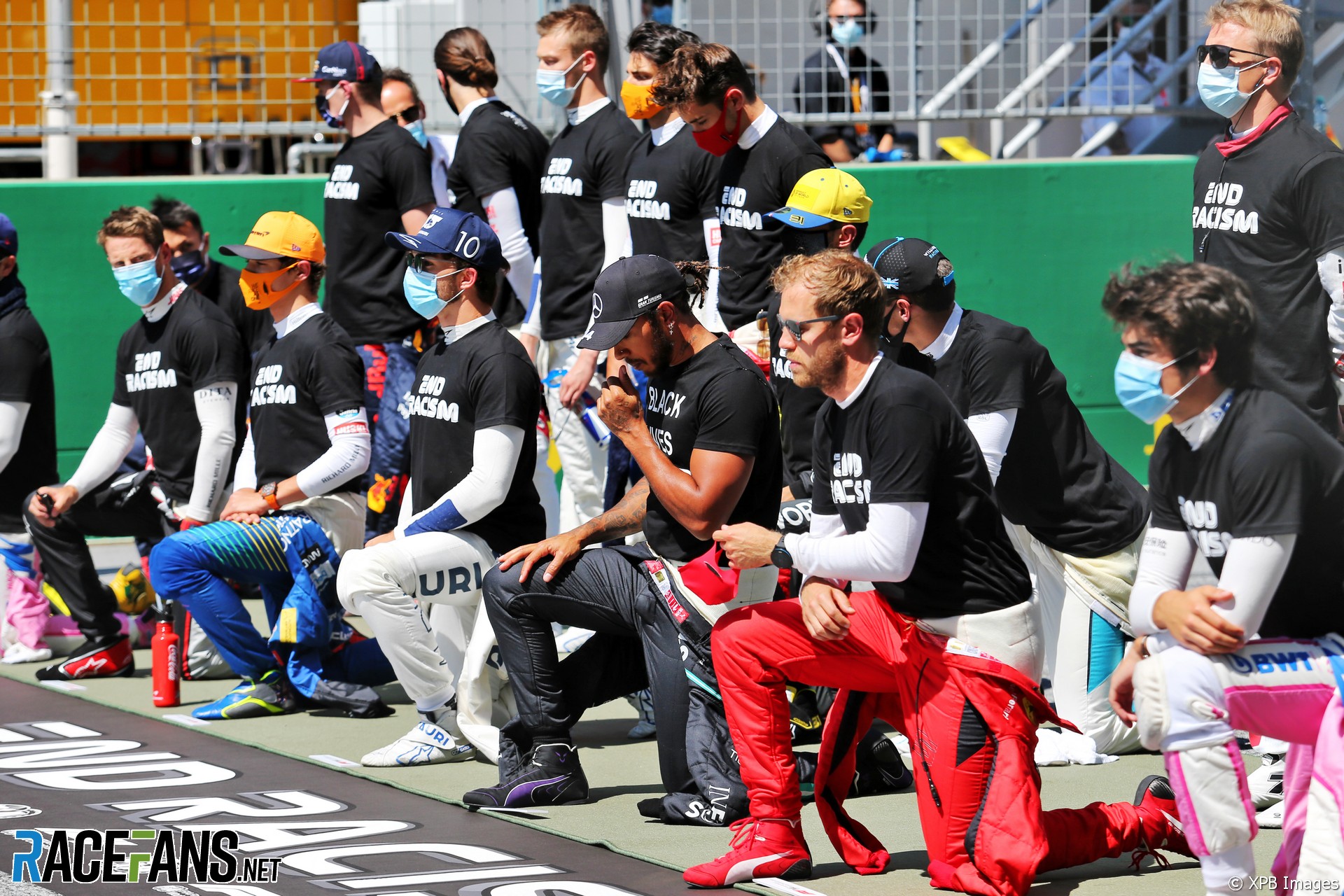 Lewis Hamilton says he may ‘take a knee’ again in a gesture of support for the Black Lives Matter movement ahead of this weekend’s Austrian Grand Prix.

However changes in the pre-race arrangements ahead of the second event at the Red Bull Ring means the drivers are unlikely to perform a similar joint gesture as most of them did last week.

Asked by RaceFans whether he plans to take a knee again on Sunday, Hamilton said: “I don’t really know. This weekend I don’t believe we have that position that’s ahead of the national anthem where we have the space and the time to utilise the moment and make a stand.”

Hamilton said he was pleased by the show of support against racism last week in which all drivers took part and 14 ‘took a knee’.

“Maybe if we have time there’s something my team and I could do. It’s just about time, there’s not a lot of time before the race.

“That’s not going to go away any time soon, that’s not going to change in just a couple of weeks. So I will do my utmost. I’m not against taking a knee again so if I can find a way of making sure it doesn’t get in the way of us doing our job then I will.”

Last week Hamilton revealed that at the 2017 United States Grand Prix he had been discouraged from wearing a helmet in support of American football player Colin Kaepernick, who originated the practice of taking a knee to support protests against racism.

He elaborated on the incident today, saying he was “advised from outside, from someone in the States who is really quite high up, that it wasn’t the time for me to be doing so and there were potential consequences of me doing it. So that’s why they advised me not to do it. Otherwise, I don’t remember who else was involved.

“But it’s not particularly important. I do still have that helmet that I’d done for Colin and I did speak to Colin about it, who was super-supportive for me to have taken the knee. I’m grateful that I was able to do it last weekend and continue on the great movement that I think he initially started and so many are continuing today.”

Daniil Kvyat, who was among the drivers who did not take a knee, said he did not want to make a gesture which is associated with other meanings in his native Russia.

“This obviously became a sensitive topic and I want to explain that of course, our clear side on the Sunday before the race was to wear the T shirts which were stating ‘end racism’,” he said. “I thought it was a very strong, already, message to the world in general from the sport, from myself.

“For me, I would say my mentality it doesn’t really – and in my country – doesn’t allow me to go on my knee. It’s only for a very particular reason. I’m ready to show in any way that I am against racism. But the knee is something that I opted not to do on Sunday.”

65 comments on “Hamilton may ‘take a knee’ again, Kvyat explains why he didn’t last week”