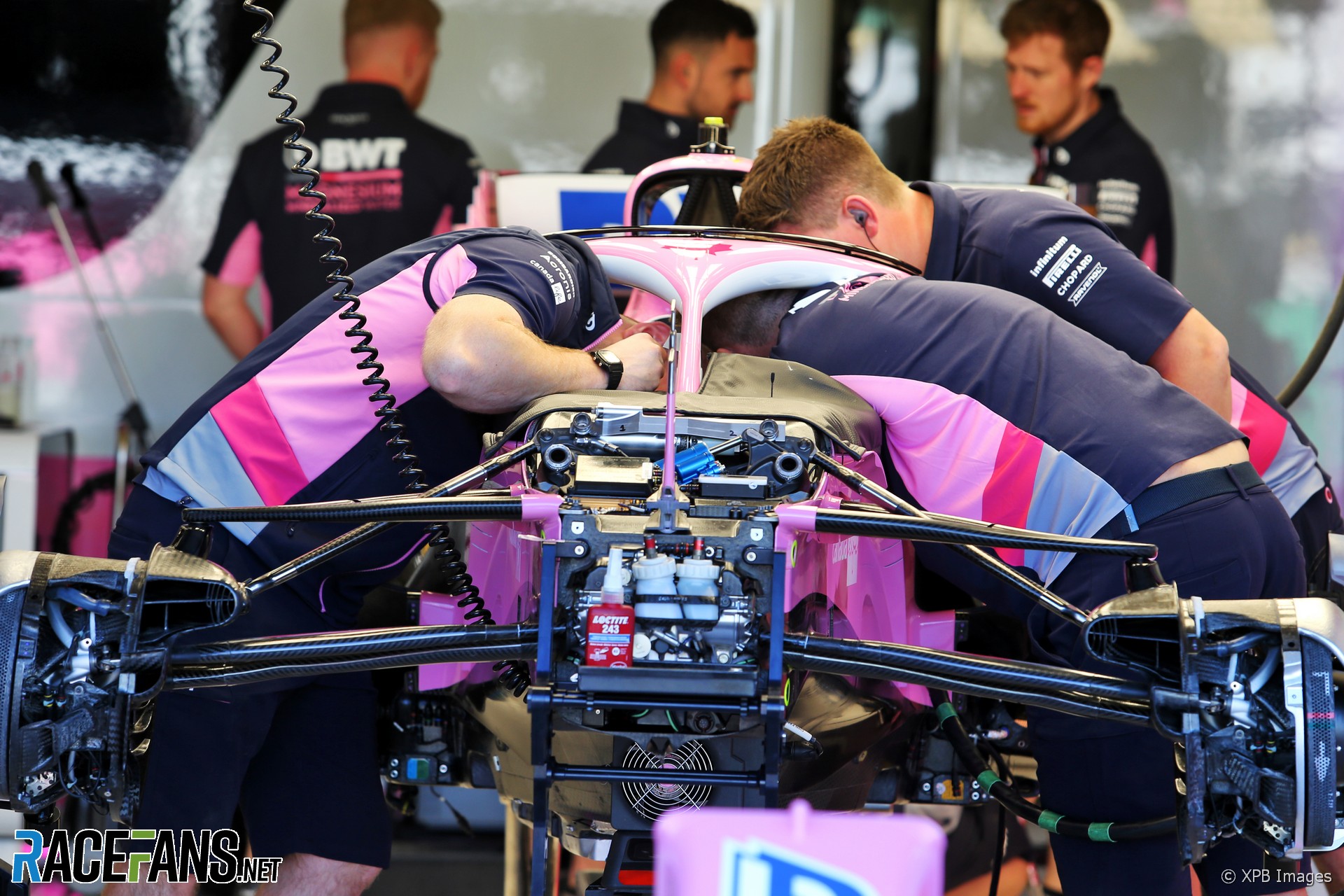 At first sight they appear totally innocuous: They sprout from within wheel assemblies in goose-neck style and generally blend in with similarly-coloured suspension components. But front and rear brake ducts are vital performance differentiators.

Brake duct designs are usually car-specific as they channel air around and under the chassis, their ram effect complemented by ventilated brakes discs which spin at up to 350km/h. Think of brake discs as 278mm diameter fans, then imagine the levels of air generated by up to 1,500 ‘cooling’ holes per disc, which is then channelled in whichever direction the aerodynamicists desire. This is, of course, a lot easier said than done.

In 2013 I spent a day at F1 brake supplier Brembo’s ‘Kilometre Rosso’ headquarters near Monza and was shown the combined dynamometer and wind tunnel the company uses to develop bespoke brake systems for each team.

I asked how they prevent design secrets from being transferred from team to team. “It’s tricky when teams find something others want to copy,” said Mauro Piccoli, who at the time carried ultimate responsibility for Brembo Racing’s F1 programme, and is now their sales director of performance and aerospace.

“But we manage,” he continued. “Obviously non-disclosure agreements are in place and honoured. They respect that.”

I subsequently asked a technical director what removing the ducts and leaving the discs to their own devices would do to car performance. He estimated the time loss at “a second per lap”. That was seven years ago, imagine the progress that has subsequently been made in these areas.

Brake ducts have become F1’s new battle ground. Last year Renault successfully campaigned for them to be included in the “Listed Parts’ category – i.e., parts which teams must design themselves or, at the very least, hold the intellectual property rights to.

Tellingly the 2019 F1 regulations were carried over basically ‘as-is’ for what was intended to be the final season of the current era (now delayed due to the ravages of Covid-19) save for this (seemingly) minor addition to the Listed Parts category as outlined in Appendix 6: ‘Air ducts as regulated by Articles 11.4, 11.5 and 11.6 of the F1 technical regulations. In other words, teams need to hold the IP to these ‘air ducts’.

Thus, when Racing Point unveiled their RP20 to cries of ‘pink Mercedes’, folk homed in on brake ducts and wondered whether they were of Racing Point’s own design, particularly as the team sources complete powertrains from Mercedes, and last May switched from using Toyota’s wind tunnel in Cologne to the Mercedes equivalent up-the-road in Brackley.

While freely admitting Racing Point had adopted the aerodynamic philosophy of the 2019 Mercedes for its RP20, technical director Andrew Green told RaceFans they had done so via photographs of the car rather than through the copying of engineering data. Rivals were cynical about this claim as far as the ducts are concerned, for the real trickery is hidden behind wheel rims and brake drums or underneath the car, where cameras have little access.

Green, was though, adamant that all was above board: “We have the same view of Mercedes everyone else has got, and there is nothing special in the information we have got – all we have got is what we see and that’s what we’ve started from and developed from.”

As outlined here in early March, a protest was expected from one or other team (albeit likely Renault) during the season opener in Melbourne with the brake system being the most likely target. Then, of course, Covid-19 engulfed the world and all such thoughts were placed on the backburner – until F1’s return to action in Spielberg last week.

Two protests (including that of Red Bull over the Mercedes DAS system) were expected, but according to a source Renault held back so as to not further disrupt F1’s first weekend in action after the hiatus. There would, after all, be another race within a week – and Renault duly filed protests post-race on Sunday, alleging brake duct irregularities.

That the stewards found the protest admissible provides a pointer to Renault’s diligence in preparing the case, as does the stewards’ decision to direct the FIA’s technical delegate to impound front and rear ducts of both Racing Point cars, to call for outside assistance from representatives of Mercedes team, and to prepare a report for the stewards on his findings. No time limit was imposed.

It is important to note that Article 3.2 of the 2020 Sporting Regulations states “Competitors must ensure that their cars comply with the conditions of eligibility and safety throughout practice and the race”. Accordingly the onus is upon Racing Point to satisfy the stewards that RP20 complies with the regulations, not upon Renault to prove any breaches.

While not in themselves indicators of guilt, according to sources within the industry, Racing Point and Mercedes use the same composite contractor for parts including ducts – the name has been withheld so as to not implicate the company – and that there are no fundamental differences between the designs. They added that, in a break with engineering convention, Racing Point’s duct drawings bear no designer name.

When this was put to Racing Point, a team spokesperson said: “We use a number of suppliers and sub-contractors. For confidentiality reasons we don’t disclose those details. Equally, our suppliers do not tell us which other teams they also supply.”

“All the information you presented to us about the design / drawings process is false,” they added.

This robust denial is characteristic of Racing Point’s total rejection of Renault’s allegations and vehement defence of the legality of its car. It intends to defend its corner vociferously.

They may be aided in this by input from Mercedes. But the three-pointed star is in an invidious position, for motorsport CEO Toto Wolff is a close friend and business associate of Lawrence Stroll.

The Canadian fashion mogul heads up both Aston Martin and Racing Point – which next year becomes Aston Martin F1 Team – while Mercedes is a (minority) shareholder in the ‘James Bond’ brand, as is Wolff.

Ultimately the verdict will come to stewards’ interpretation of whether the Racing Point ducts bear any resemblance to the Mercedes equivalents and, if so, whether any such resemblance is purely coincidental. In other words, whether Green and his team got the “the same view of Mercedes everyone else has”, or a better view.

If found guilty Racing Points risks exclusion from the first two races or even the championship (considered unlikely as the series needs every car going) or any sanction between the two. Equally, if it comes down to that and can be proven that Mercedes was a willing accomplice then Wolff could have some serious explaining to do to both the FIA and his masters in Stuttgart.

However even if all or any of the duct designs – these are said to have evolved as the 2019 season progressed – are found by the stewards to be too similar for coincidence, there is a potential loophole that Racing Point (and Mercedes) could hang their defence on: that the full intellectual property to the 2019 ducts was sold by the latter to the former before 1 January 2020, when the amendments to the Listed Parts clauses came into effect.

Although this would not wash with other listed parts, it may well do so in this instance as they were ‘open’ parts before the start of this season. Thus, the stewards may not only be called upon to rule on similarity, but on jurisprudence, too.

A fascinating verdict awaits, one that is likely to be appealed either way.

46 comments on “Analysis: Why Racing Point is under protest by Renault – and the loophole which could clear them”