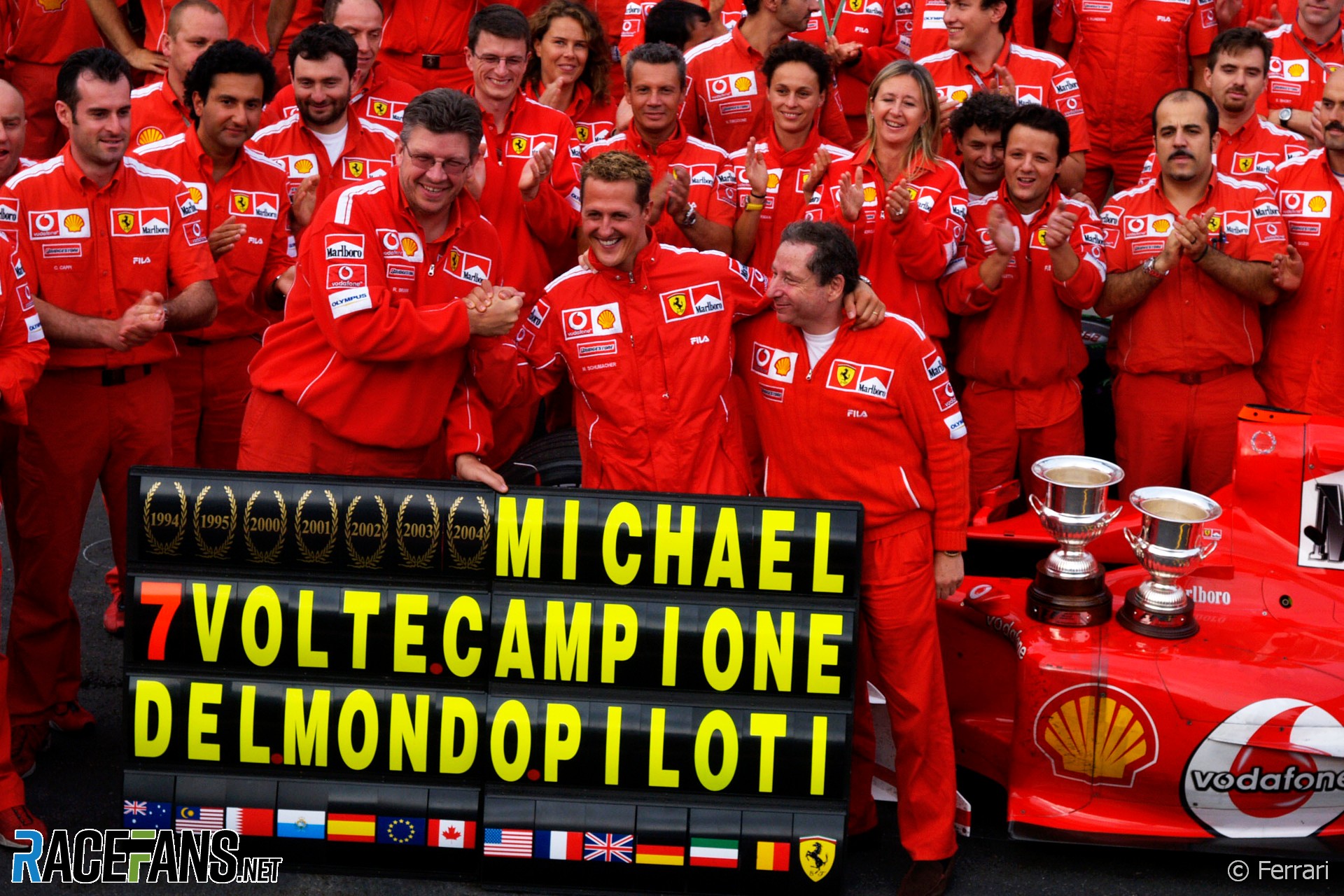 In late 1992 Bernie Ecclestone, tightening his grip on Formula 1’s commercial rights after the re-election of his friend Max Mosley to the presidency of FISA (then the sporting wing of the FIA) was concerned that Ferrari’s lacklustre performance could see the Scuderia exit the pinnacle of motorsport. Such a move would obviously diminish the value of F1.

Luca di Montezemolo, appointed to Ferrari’s top job the previous year, was counting the costs of an extended win-less streak. The team had last won a grand prix in September 1990 and, worse, Ferrari had secured no championship silverware since winning the constructors’ title in 1983, nearly a decade earlier.

Disgruntled Ferrari fans had no drivers’ champion to fete since Jody Scheckter lifted the crown at Monza in 1979. That long, 13-year stretch weighed heavily in the hearts of the tifosi.

To put those timelines into modern perspective, consider that it is now exactly 12 years since Ferrari last won a constructor title, and 13 since Kimi Raikkonen’s success…

Back in the nineties, Montezemolo was acutely aware that not only was Ferrari fast descending into F1’s laughing stock, but that the Prancing Stallion’s brand image was in downward lockstep with the team’s on-track performance. That in turn affected the premiums the company’s road car customers were prepared to shell out for its production products.

Montezemolo and Ecclestone knew each other well, having competed against each other during the mid-seventies while the Englishman owned Brabham and the Bolognese oversaw Niki Lauda’s first (1975) championship title, driving for the scarlet team. Now, though, the Italian nobleman was on a different mission: Rebuild Ferrari on road and track after founder Enzo’s death in 1988.

Clearly change was desperately required and it was in their mutual interests to return Scuderia Ferrari to the top. But how to institute it? During the past three years alone no fewer than six team principals – including Enzo’s son Piero – had tried but demonstrably failed to reverse Ferrari’s fortunes. 1991 had been particularly chequered: three team principals spread over 16 races.

Ecclestone had a candidate in mind. A tough, no-nonsense 40-something sporting director who initially competed internationally before switching to management and delivering world championship and other high-profile successes across various disciplines – including WRC, Le Mans, the World Sports Car Championship, Dakar and Pikes Peak – for Peugeot. And Ecclestone knew Jean Todt was itching to turn his talents to F1.

It was not just Todt’s track record that impressed F1’s ringmaster, but also his fearlessness in the face of politics. He’d dragged FISA into court over regulation changes and could thus withstand the infernal (and internal) pressures all Ferrari team bosses are subject to. Bernie also knew Todt was potentially on the loose after Peugeot’s main board had bombed a planned switch to F1.

Thus, Bernie made an inspired call. “Get Jean Todt” he told Montezemolo, offering to broker a secret meeting. Duly taken up, a series of negotiations followed during which Todt demanded carte blanche over the sporting division. Montezemolo acceded, and Todt’s first race in red was the 1993 French Grand Prix.

The rest is history – best summarised by a run of record-setting six and five consecutive constructors and drivers titles respectively. They did the double again in 2007 as Todt prepared to leave, en route to succeed Mosley as FIA president.

Todt’s appointment was an extremely brave move by Montezemolo for it marked a break with tradition. Only once in Ferrari F1 history had a foreigner held the top sporting job, namely Swiss sportscar racer Peter Schetty, who moonlighted as competition manager in 1971. The rest (19 by 1993), including Marco Piccinini, born and educated in Rome before moving to Monaco, were Italians.

This list is by no means exhaustive: at one stage the list of nationalities employed by the Scuderia rivalled that of the United Nations, and as much English – if not more – was heard as passed a red huddle in the paddock. Crucially, this multi-national collective delivered, rapidly hauling in McLaren in the overall win stakes before edging away.

Still, so shaky had Ferrari become that it took six long years before Todt delivered on his objective via the 1999 constructor championship. Michael Schumacher delivered the drivers’ title the following season, making it 16 years since the 1983 title and 21 years since Scheckter’s success. However, once Todt’s Red Army rolled it proved unstoppable until regulation changes briefly halted the charge in 2005.

Purple patches soon returned. Kimi Raikkonen and the team lifting both 2007 titles before Todt started winding down in order to hand over to his hand-picked protégé Stefano Domenicali. The team silverware stayed put in 2008 although Felipe Massa – another Todt recruit – narrowly missed out on his title in that unforgettable race at Interlagos.

A gradual erosion in form followed, gradually accompanied by a steady return to the Ferrari of old, to one where patriotism seemingly rules over points. The Italy-first policy appears to be back: All Todt’s successors held Italian nationality, with only current incumbent Mattia Binotto having born outside the country – in Switzerland, to Italian parents.

Marco Mattiacci – who lasted less than a year – was parachuted in from an executive position with Ferrari USA and had absolutely no clue about inner workings of F1. His first appearance in an official capacity at a grand prix – China 2014 – is best recalled for his donning of sunglasses throughout the weekend, overcast rainy weather and dusk notwithstanding.

Last year’s appointment of Binotto was analysed here previously, and the team’s form since provides no reason to revise that opinion. If anything, the opposite.

Another common thread since those halcyon years is that all team principals in history save for Todt were either Ferrari ‘lifers’ who were promoted internally or had prior links to the company or founder. This includes Binotto’s immediate predecessor Maurizio Arrivabene – an outside appointment, true, but a former senior marketing executive of long-time team partner Philip Morris and thus essentially an integral part of the team.

The third common denominator is that all four post-Todt team principals – in sequence, Domenicali, Mattiacci, Arrivabene and Binotto – are extremely good men at heart. Yet none seems or seemed totally comfortable in the rough-and-tumble of F1. Domenicali has happily found his niche as CEO of Lamborghini, Mattiacci is back in North America doing high end auto marketing, and Arrivabene is retired.

To summarise: in the 13 years since the Jean Todt’s 13-year spell in charge era ended in November 2007 four Italian team principals followed in his footsteps, who collectively have a single title to show for it – that 2008 constructor championship, which had the momentum of previous successes behind it.

Twice during this period Ferrari slumped to fourth in the constructors, failing to win a single race in 2014 and 2016. This despite drawing on the biggest budgets and pocketing the largest slices of F1’s revenues regardless of on-track results. Since 2010 Ferrari has employed three world champions – Fernando Alonso and Sebastian Vettel, with six titles scored elsewhere between them – and a returning Raikkonen, fired in 2009.

Now consider the recent past. Ferrari entered a controversial secret settlement with the FIA over its power unit operation, and simultaneously lost its performance edge. This was reckoned by an engine customer as being around half a second per lap, while both years Ferrari had a ‘draggy’ car, one patently not up to Mercedes or Red Bull standards. This year it has mysteriously lost another half second, assumed through some chassis or aerodynamic deficit.

Qualifying in the midfield leaves the team more open to first-lap skirmishes, as happened last weekend when both cars collided, making for a point-less weekend. That something is seriously amiss internally is borne out by Ferrari being the only team to have received a formal FIA warning over COVID breaches. Although Ferrari is unlikely to remain fifth in the standings, it is clearly going to be a tough 2020 for them.

All of this begs the pointed question: Does Ferrari’s apparent reversion to a policy of (seemingly) appointing only Italians with Ferrari experience to its top F1 job lie at the root of the Scuderia’s downward trajectory for the simple reason that the already limited pool of qualified individuals for probably the most demanding and multi-faceted leadership role in global sport is reduced by at least 95%?

Surely Ferrari needs the very best about, not merely the best talent to be found in what is logically a rather shallower pool than available outside of Maranello.

Such fervent patriotism was considered appropriate when cars sported national colours and Ferrari raced in red through national pride not commercial considerations. This was long before Ferrari was spun off from Fiat Group in 2015 and registered as a Dutch PLC quoted on the New York Stock Exchange in order to attract multi-national investment.

Ferrari owes its shareholders the best possible on-track results, results befitting its status as the ‘grandee’ of F1, particularly as its entire marketing platform centres around F1.

After all, Ferrari has (or had) no qualms about employing the finest drivers of their generations regardless of national flag. Thus Juan Manuel Fangio (Argentinian), Mike Hawthorn and John Surtees (British), Niki Lauda (Austrian), Scheckter (South African), Schumacher (German) and Raikkonen (Finnish) joined Italian drivers Giuseppe Farina and Alberto Ascari in the pantheon of Ferrari champions. Why does this not philosophy not apply to team principals or senior staff?

Is it pure coincidence that five of seven senior team members listed under ‘team’ on Ferrari’s website are Italian, joined by a Frenchman and a Spaniard? True, ‘foreigners’ have in the past been employed as technical directors (or similar), but their prevalence is far out-weighed by locals. Consider that every F1 engine director bar one has been Italian, with the exception being Simon, a Todt recruitment. Coincidence?

Renault is headed is by a Frenchman, the executive director and technical director are Polish. Swedish owned, Swiss-based Sauber is named after Alfa Romeo, but the team boss is French. The situation at Canadian-owned Racing Point is equally disparate; numerous other such examples abound.

Ferrari’s future in F1 will hinge on some brave decisions, the toughest of them all being whether to venture outside its bubble as Montezemolo did almost 30 years ago or whether to continue with its policies. Ferrari makes much of its history, yet seems doggedly determined to hide its most successful period behind a bushel rather than learn from it.

What people remember first about Ferrari in F1 at the turn of the millennium is that they – and, by extension, Italy – reigned supreme, not that the team sporting the green/white/red Tricolore happened to be managed by a Frenchman.

Continuing to plod down this ‘Italy-first’ path does no favours to Ferrari, its legions of fans and followers, and F1 itself. It is an approach which deprives the team itself and the country it represents around the world the success they crave so passionately.

61 comments on “Ferrari should heed this lesson from its greatest era: Diversity delivers”