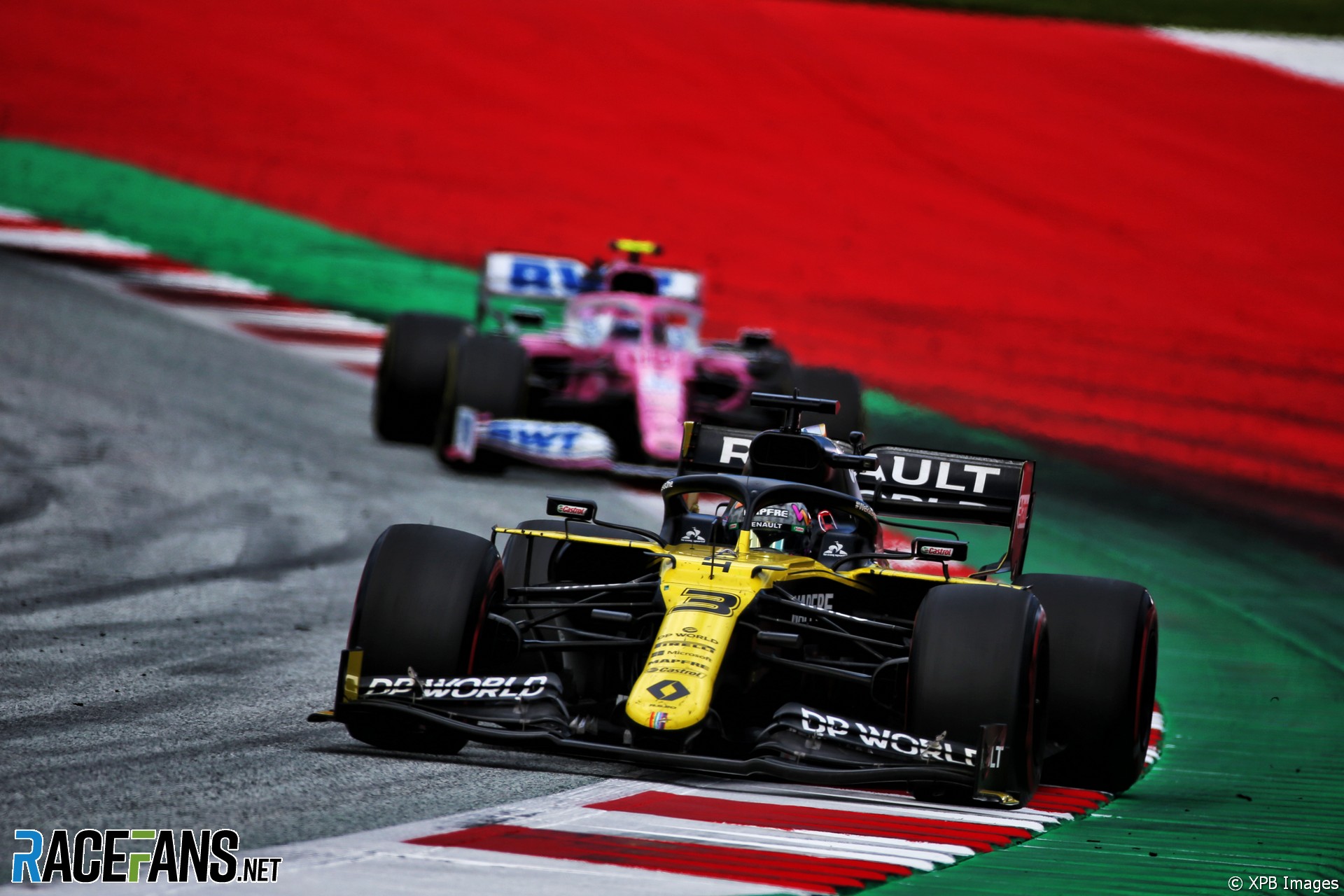 Lance Stroll avoided a penalty for his penultimate-lap incident with Daniel Ricciardo in the Styrian Grand Prix because the stewards ruled neither driver was wholly responsible for the incident.

Ricciardo yesterday criticised the stewards’ decision not to penalise Stroll who forced him off-track at turn two after lunging down the inside of the Renault driver. Stroll also left the circuit as he gained the position.

FIA race director Michael Masi confirmed the stewards looked at the incident at the time but judge neither driver was wholly responsible for the incident.

“The stewards’ view, from my understanding from the quick chat I had to them on the radio at the end of the race when they were investigating, was that neither driver was predominantly to blame for the incident,” said Masi.

Drivers have previously been penalised for forcing other cars off the circuit. Stroll was give a five-second time penalty during the 2018 Japanese Grand Prix for doing so to Fernando Alonso. Gaining a position by leaving the track has also attracted the same penalty, as Ricciardo discovered to his cost when he put all four wheels off the track while overtaking Kimi Raikkonen at Paul Ricard last year.

However calls for stewards to ‘let them race’ last year prompted changes to how some rules are interpreted. More recent cases have shown how similar calls have been considered differently.

Last year Alexander Albon was given a five-second time penalty for overtaking Kevin Magnussen by going off at the Variante della Roggia chicane at Monza. Albon refused to hand the position back to Magnussen, stating the Haas driver had forced him off the track.

In coming down on Magnussen’s side the stewards noted at the time: “The race director advised the team that he would authorise the driver giving back the place however the team declined on the basis that it believed that car 23 [Albon] had been forced off the track. Nevertheless, the stewards believe that the actions of the driver of car 20 [Magnussen] were consistent with the current approach to driving standards (‘let them race’).”

The ‘let them race’ policy became a cause celebre last year after Sebastian Vettel lost a potential victory in the Canadian Grand Prix after he was penalised five seconds for rejoining the track unsafely in front of eventual winner Lewis Hamilton. Speaking in a recent interview for the official website, Masi said the handling of the incident divided drivers. “Even discussing it with the drivers’ meeting with all of them it wasn’t a clear consensus if it should or shouldn’t have been a penalty or what could’ve happened.”

Masi subsequently invited drivers and team principals to offer their views on a range of incidents in order to understand the widely-expressed desire for the stewards to ‘let them race’.

“One of the parts that probably a lot of people aren’t aware of is that to help me in my role, as well as helping the FIA and F1 in understanding what, there was this principle, these three words that were running around a lot called ‘let them race’,” said Masi, who had become F1 race director earlier that year.

“But as the new boy on the block, no one could actually tell me what ‘let them race’ actually meant. So I went through a process of getting a whole lot of incidents together last year and with zero warning, got the drivers after a drivers’ meeting and said ‘OK, play through the incidents, you tell me what you think the penalty should have been, or no penalty’. Anonymously – I didn’t ask them to put their names on it or anything. They literally filled out a spreadsheet. Same element with the team principles and same part with the sporting directors.”

The outcome was a “mixed view, probably just like the spectators and the viewing public”, said Masi. “But generally those that were seen as an infringement previously and a breach of the regulations, the vast majority agreed that it was a breach.”

Riccairdo said yesterday he intends to raise the handling of the incident at today’s drivers’ briefing. This apparent new interpretation is likely to come under considerable scrutiny, as it would seem to establish a precedent that drivers may gain places by leaving the track and forcing another driver off with them.