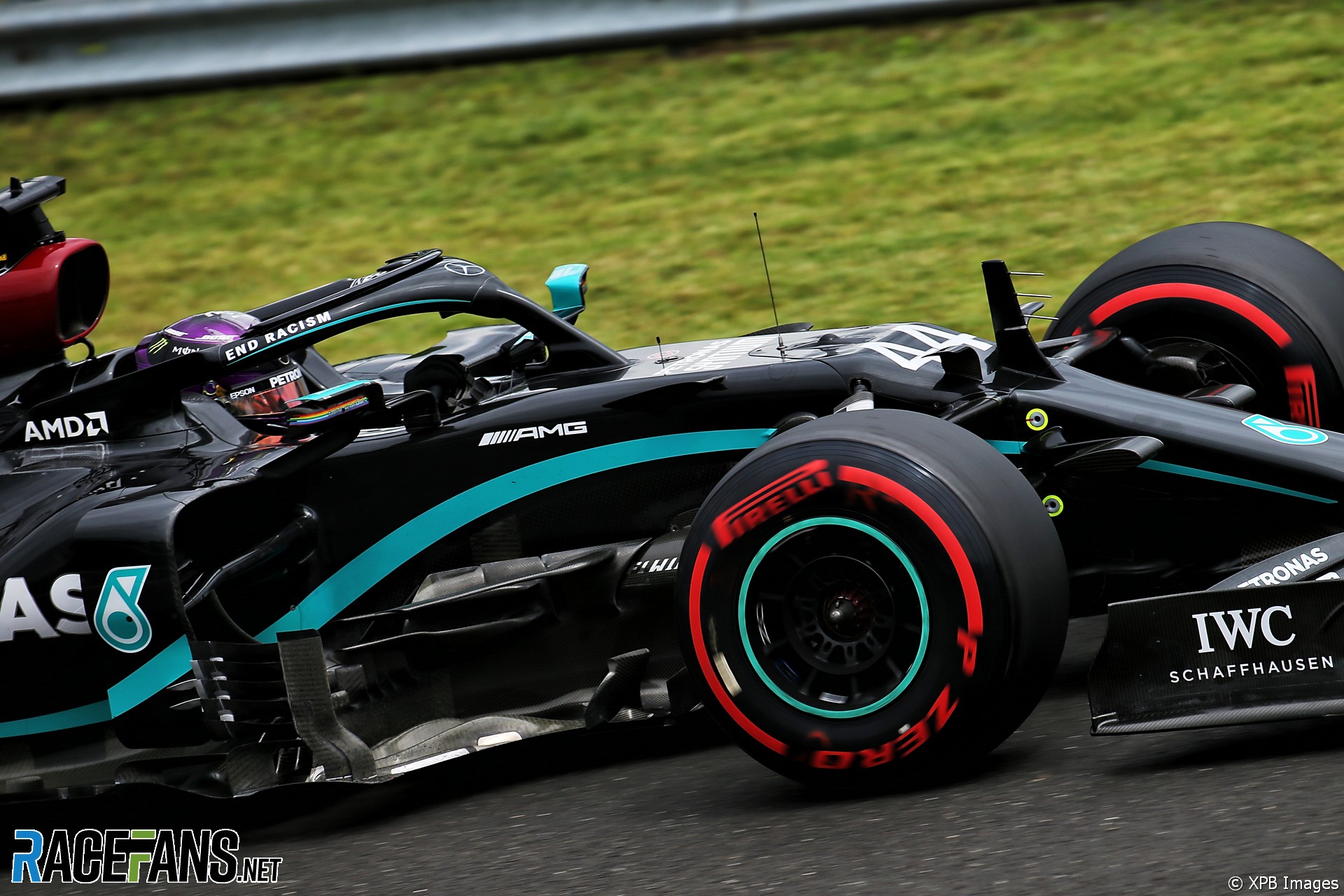 Lewis Hamilton will start the Hungarian Grand Prix from pole position after beating the track record for the Hungaroring by over a second.

He will share the front row of the grid with his team mate Valtteri Bottas. The Racing Point pair took the second row of the grid, followed by the two Ferraris, who relegated last year’s pole winner Max Verstappen to seventh place.

Light spots of rain began to fall around the back of the Hungaroring as the first drivers joined the track at the beginning of Q1. However it never developed into a proper shower, and as the track conditions improved throughout the session, timing a run to be among the last across the line proved vital.

The Mercedes drivers headed the times initially, followed by the Racing Point pair. At the end of the session, Sergio Perez produced a superb effort to head the times with a 1’14.907. But the fact the team felt compelled to send him out for another run demonstrated how quickly the track conditions were improving.

The Ferrari customer teams were again finding it heavy going to post a time which would get them into Q2. Matters were made more challenging for Antonio Giovinazzi as he had one lap time deleted for another run, and had his second run spoiled by a huge cluster of traffic.

He eventually posted a time substantially faster than that of team mate Kimi Raikkonen, the pair separated by over half a second, but the two Alfa Romeos were rooted to the bottom of the times sheet. The Haas pair also went no further, Kevin Magnussen falling short by a tenth of a second.

The Williams pair looked like a Q2 threat from the off, and both drivers delivered on the car’s potential. George Russell’s last effort put him in the rare heights of third – he eventually went through in ninth – while Nicholas Latifi claimed the final place in Q2.

Despite problems with his power unit, Pierre Gasly grabbed a place in the next stage of qualifying, but team mate Daniil Kvyat got no further. Max Verstappen also complained of poor performance from his Honda, and had a minor scare as he fell close to the drop zone at the end of the session, but comfortably made it through.

With an eye on the strategy for tomorrow’s race, Mercedes, Racing Point and Renault sent their drivers out on the medium tyre compound for the start of Q2. The results were mixed.

Daniel Ricciardo barely scraped into the top 10 after the first runs while Esteban Ocon was four-tenths of a second shy. The two Racing Points took seventh and eighth, but not comfortably, leaving them with a difficult choice ahead of their final runs.

As for Mercedes, Lewis Hamilton beat the track record, Verstappen’s pole position time from last year, with the harder rubber. An ominous sign for their rivals.

Ferrari ran their drivers on softs, but while Vettel set the third-quickest time behind the Mercedes, Leclerc was only 11th to begin with. “I did a mistake,” he admitted as he returned to the pits.

Renault opted for softs for their final run, but it wasn’t enough to get either driver into the final 10. Ricciardo fell short by 0.153 seconds after Leclerc’s last lap comfortably put him into Q3.

Mercedes also went their drivers out on softs as a precaution in case the track improved suddenly. But that didn’t materialise and both aborted their final runs.

Surprisingly, Racing Point stuck with their medium tyre gamble. Even more surprisingly, despite neither driver posting significant improvements, they held on to their places in Q3. Gasly also reached the final 10 despite his engine giving up.

While the two Williams drivers failing to reach Q3 was no great surprise, Russell distinguished himself by out-qualifying Albon’s Red Bull, which was seven-tenths of a second slower than his team mate’s. “Sorry guys but I told you just don’t put me in traffic,” fumed Albon as he returned to the pits.

With Gasly’s car already up on stands receiving attention from the AlphaTauri mechanics as the session, began, Q3 was contested by just nine drivers.

Having already beaten the track record on medium compound tyres, Hamilton was obviously going to do some serious damage to it on softs. Sure enough, he unleashed a 1’13.613, almost a full second faster than last year’s pole position time.

Bottas was second-quickest after the first runs, following by Lance Stroll, while Perez’s lap time was deleted after he ran wide at turn four. He was followed by Verstappen, then the McLarens and Ferraris.

With the track no longer improving as quickly as before, the Ferrari and Racing Point drivers chose to begin their final runs early to ensure they didn’t encounter traffic. Vettel moved up to fourth with his last effort, while Leclerc matched him almost tenth-for-tenth, and ended up four hundredths shy of his team mate.

Seemingly not wishing to risk another lap time deletion, Perez posted the fourth-quickest time to join his team mate on the second row.

The pole position fight was an all-Mercedes affair. But Hamilton had too much for Bottas: improving his time in the second and third sectors, he lowered the track record again to a 1’13.447. Bottas could, but he remained a tenth shy of his team mate.

Ferrari’s decision to run early paid off: They claimed the third row of the grid behind the Racing Point pair. Verstappen, seventh, was almost three-tenths of a second slower than he had been last year. The McLaren pair will start eighth and ninth, while Gasly did not set a time.