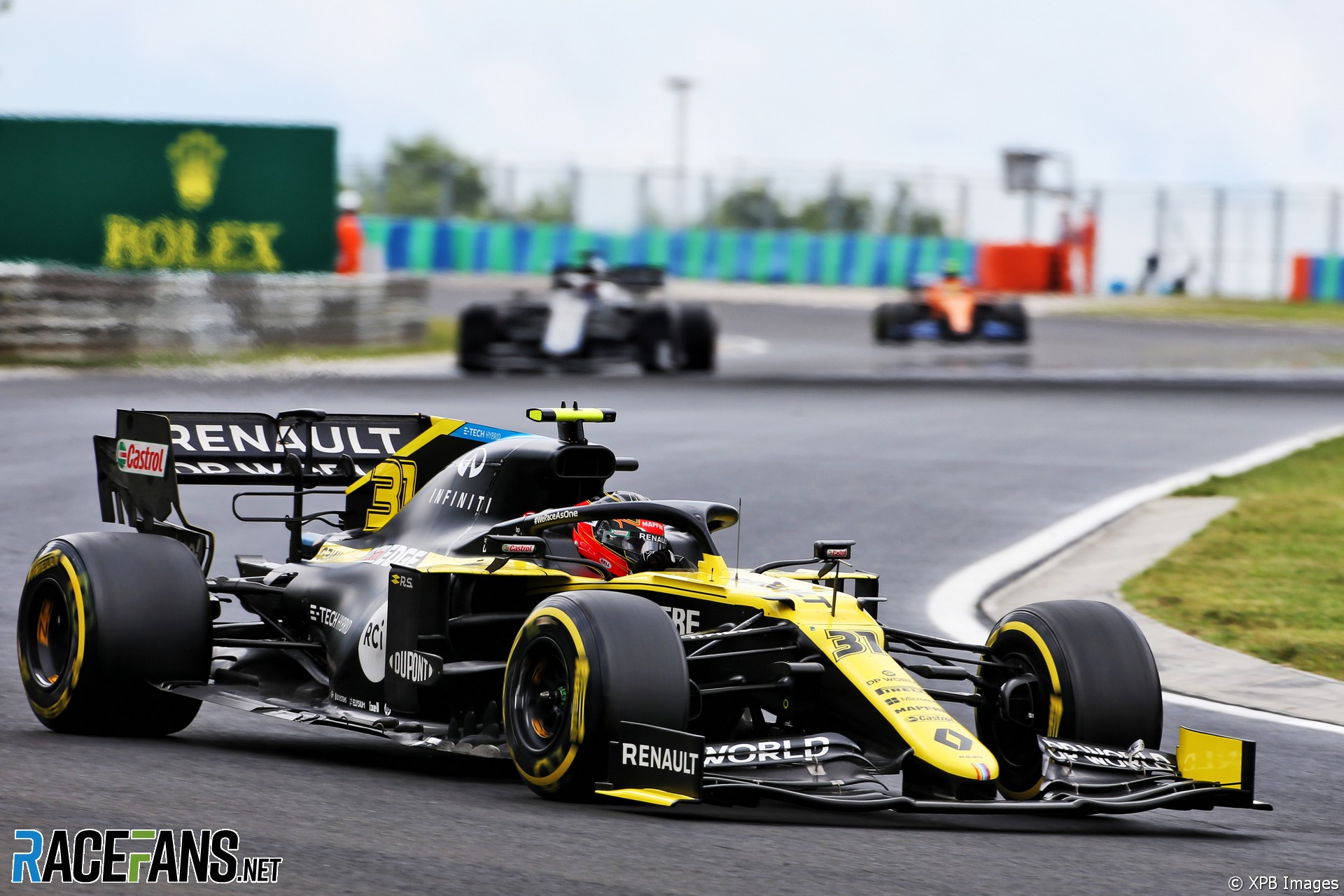 Esteban Ocon made his frustration clear after finishing his third weekend back at the wheel of a Formula 1 car in 14th place.

“That was a horrible weekend guys,” he told his Renault team as he returned to the pits. “We need to have a good review.” It wasn’t the outcome Ocon was expecting at the Hungaroring, a venue he described before the weekend began as “one of my favourite circuits”.

Things started to go wrong in qualifying: Ocon was an encouraging 10th-quickest in Q1. But in Q2 the team tried to progress using the medium compound tyres. They weren’t quick enough, and switching to the softs for the second runs didn’t solve the problem.

Ocon went out in 14th place, fractionally slower than he had been in Q1, and less than a tenth of a second behind team mate Daniel Ricciardo in 11th. “It was a disappointing session,” he said afterwards.

“I’m not happy about how things went, really. There’s a couple of things. Of course the balance of the car didn’t feel very strong, I was not happy with how the car was handling. It was a bit difficult to get it around the lap, to make a clean lap. It was not easy. So there was a bit more potential we could have unlocked there if we had the right balance.

“The other thing was the strategy didn’t make our life easy. Qualifying on the medium in the first run of Q2 made it difficult, basically, for the following run just to perform a good lap. It’s important in qualifying to have good consistency between the runs and good improvement between them and that’s not what we had. It made it difficult overall to produce a good quali.”

Had the team got the strategy right, Ocon believes they could have made the top 10. “It’s not because we didn’t qualify well today that the car is not capable of performing,” he said. “If we did exploit everything from the car and did give it 100 percent I think there was a chance of going into Q3. Definitely, that’s my opinion.”

As the race started on a damp track Nicholas Latifi beat Ocon to turn one and Kimi Raikkonen passed him at the exit. With the surface drying out, all the drivers had to grapple with the decision when to switch from intermediate tyres to slicks.

At the end of lap one, Ocon said the track was “not yet” ready for slick tyres. Moments later he saw Daniil Kvyat ahead of him pit for dry-weather rubber. But Ocon was making progress on his intermediates: he passed George Russell, gained another place when Raikkonen ran wide and then took Lando Norris around the outside of turn one.

Near the end of his third lap Ocon was asked again if he wanted slicks, and once more chose to stay out. But immediately after seeing Pierre Gasly and Latifi ahead of him peel into the pits, he called “next lap”.

He had second thoughts: Valtteri Bottas emerged from the pits ahead of him on slicks and Ocon shot past. “Maybe not,” he said, “have a look”.

“Pretty much everyone else is stopping,” his team advised. That included Ricciardo, five seconds ahead of him, which would potentially cost Ocon more time. “Double stop Esteban, or we do another lap,” he was told.

“What do you want? Tell me,” he replied. “Box, box,” came the call. As Bottas, his slicks now up to temperature, was at the time driving around the outside of Ocon at turn 13, it was clearly past time to give up on the intermediates. Ocon swerved around the back of the Mercedes and into the pits.

“The first pit stop stacking early on in that race made me lose ground, made me lose precious seconds,” said Ocon after the race. But the ‘double stop’ didn’t actually seem to cost Ocon much time: It was Renault’s fastest complete stop of the race, less than seven-tenths off the quickest of the day. What hurt him was the delay in switching to slicks. He rejoined the track 16th, the benefit of those early passes lost.

From there Ocon settled into the predictably frustrating Hungaroring routine of staring at the rear wing of another car: Raikkonen at first, Kvyat later. “From there on because the pace is so close between the cars, it was difficult to come back,” he said later. “We were a little bit stuck.”

Ocon threw everything at the AlphaTauri driver over the final laps, only to find Norris on his outside at turn two on the final tour, the McLaren driver cheekily demoting him to a lowly 14th place. Ocon oversteered wildly as he returned to the pit straight before taking the chequered flag.

“That was a horrible weekend guys,” he said shortly after crossing the line. “We need to have a good review. I don’t want ever to have a race like this. It was really poor.”

“I agree, it was poor,” concurred his race engineer.

Afterwards, Ocon said his Hungarian Grand Prix was one he would prefer to forget – but knows he and the team have much to learn from.

“It was not a good weekend to start with,” he said. “I think overall we didn’t gain anything from the conditions and we didn’t treat the session right in the end with strategy or anything. So we have to review how we could have done better.”