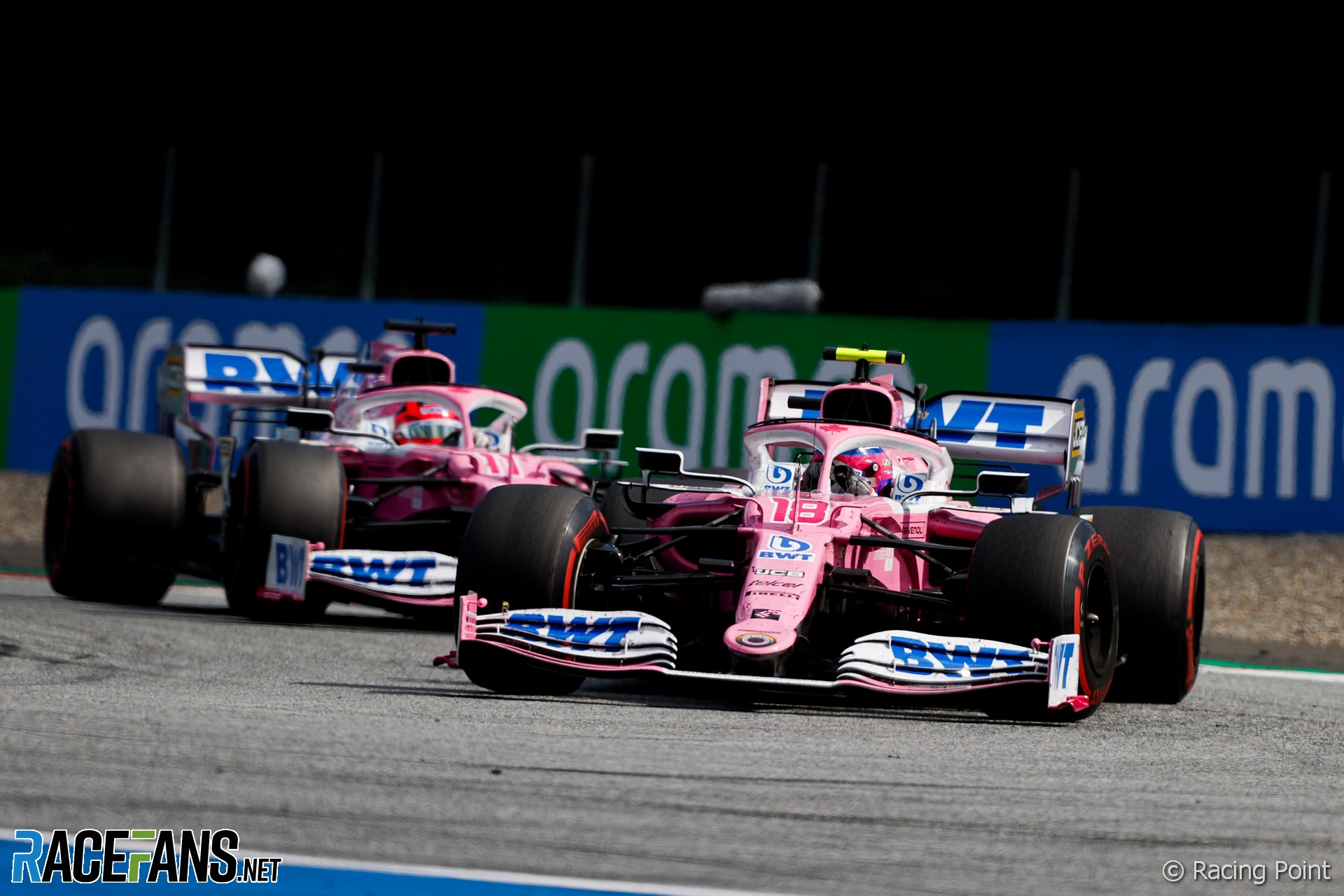 Does Racing Point, who stand accused by Renault of breaching Formula 1’s ‘listed parts’ regulations by copying brake ducts from its major hardware supplier Mercedes F1, have a ‘Plan B’ in the event the team is found guilty?

Asked directly by RaceFans on Sunday evening whether, team boss Otmar Szafnauer was adamant that there had been no breaches.

“It’s impossible for them to be illegal,” he stated emphatically. “Brake ducts take a long time to design and make; they’re very, very complicated, and we have 886 individual drawings for our brake ducts.”

Thus, he said, Racing Point has no back-up option, simply as he doesn’t consider one to be necessary. “We have no concerns whatsoever. Our brake ducts are legal, we ran them last weekend, we ran them again this weekend, and we’ll be running them again at Silverstone.”

Szafnauer indicated the pink team could spring a surprise on the stewards yet. “I have all the information of how we designed and developed them,” he said. “The rest of the world doesn’t [know] yet because we haven’t disclosed that to the stewards.

“We had disclosed it to the FIA and the FIA were satisfied that what we had done was absolutely legal. However, that’s not how [F1’s] judicial system works. It’s the stewards who have the right and the power to rule. So now we’ve got to inform the stewards as well.”

Szafnauer was referring to an inspection of its facilities undertaken by the FIA in February after pre-season paddock innuendo about ‘Tracing Point’ and their ‘pink Mercedes’, particularly as the team admitted copying last year’s championship-winning Mercedes W10.

“It takes a little bit of time because when the FIA came to us to investigate how we designed and developed the car, including the brake ducts,” a clearly frustrated Szafnauer said.

“They came to the factory, spent two days there, interviewed people looked at all our drawings, looked at the design and development process, what we did in the tunnel and CFD, how we got to where we got, and they were satisfied.”

However the FIA last week admitted to examining the team’s processes, but not individual components, including those contentious ducts. “We did go to the Racing Point, and we primarily focused on the rest of the car, not the brake ducts, fortunately or unfortunately,” FIA single-seater delegate Nikolas Tombazis said in Hungary.

“That,” he emphasises, “would be blatantly illegal.”

That sentence is the crux of the matter. If the team copied listed parts off Mercedes – with or without the German team’s express permission, whether via photographs or other external methods – then all is above board. If, though, classified information changed hands, whether by arrangement or underhand methods (think the 2007 Ferrari/McLaren ‘Spygate’ scandal), then Racing Point and possibly even Mercedes could face serious sanctions.

He opined that a designer “never ever starts with a clean sheet of paper”, while stressing his words were those of an engineer and not delivered in an official capacity. By implication, he believes engineers cannot simply forget what they previously saw.

As outlined previously when we revealed the potential loophole, brake ducts were previously ‘unlisted parts’ (and could thus freely be sourced from outside vendors, including other teams), which status changed to ‘listed’ from this season.

Thus a key question is whether Racing Point designed their 2020 ducts themselves from ‘memory’, or received outside data, and if so, whether the ‘spirit’ of the provisions of Appendix 6 of the 2020 Sporting Regulations, which governs the use of ‘listed parts’, can be applied retrospectively.

The applicable articles state, amongst others, that:

“It retains the exclusive right to use the Listed Parts in Formula 1 so long as it competes in Formula 1, and

“In the case of the Outsourcing of manufacture such third party shall not be a competitor, and

“In the case of the Outsourcing of design, such third party shall not be a competitor or a party that directly or indirectly designs Listed Parts for any competitor.”

Mercedes motorsport CEO Toto Wolff echoed the FIA delegate’s sentiments on Sunday. “I don’t think it will be a debate trying to play the detective and find what happened, the debate will be more from a regulation point of view whether [Racing Point] followed the right process,” he said. Of course, cynics will cry, he would say that given his team is at the very least an implicated party, and could ultimately be called upon to testify.

In response to a question on Saturday concerning Sebastian Vettel’s future, Wolff denied personal links to Racing Point, stating: “My shareholding in [Aston Martin] is not related at all to the [Racing Point] Formula 1 racing team.” Others may not see it that way.

Wolff is a close friend and travelling companion of Racing Point boss and Aston Martin chairman (and shareholder) Lawrence Stroll; Wolff recently acquired a $9 million stake in Aston Martin, which in turn has a five-year deal to title-sponsor Racing Point from 2021, when this year’s basic car designs are mandated. Mercedes, too, is a minority shareholder in Aston Martin, so there are double links.

Any race successes will obviously rub off on the main car brand. Why else would Stroll, brand builder par excellence, so publicly link the two? Thus Wolff’s personal stake is linked to the race team’s fortunes. Regardless of how it is spun there are potential conflicts of interest, with a ‘re-engineered Mercedes’, as Wolff calls the cloned car, being the root cause of that conflict.

Brake ducts were previously ‘non-listed parts’ – in other words, parts that could be legally traded or shared between teams. However, the FIA World Motorsport Council’s decision of June 14th 2019, aimed at eliminating the open sourcing of a crucial component that has major aerodynamic effects, altered that status.

Thus, observing the ‘spirit’ of the written word should be a crucial consideration in any verdict, but that constituent has gradually given way to ruthless exploitation of regulations in proportion to the increasing costs of success in the sport. Why else did Racing Point blatantly copy – as it admits it did – certain elements of F1’s dominant design; why else did Ferrari need to reach a secret agreement with the FIA?

However, the consequences of whatever verdict – which is, as Tombazis stated last weekend, is likely to hinge as much on philosophy as on letters of the law – are likely to be massive either way: Should Racing Point be found legal in every respect, the sport can expect two categories of cars on future grids, namely originals and direct copies, down to the tiniest aerodynamic details within hidden components.

“[The protest] is about whether smaller teams should be allowed to be supplied parts by bigger teams for less R&D and the bigger teams to make some business out of it or should everyone develop their own chassis and R&D, which as a consequence would probably mean there is a two-tier society even with a cost cap,” Wolff acknowledged.

However, the Austrian hit back at criticism from the midfield about ‘re-engineered’ cars: “All the complaining we heard last year that the smaller teams [not being] able to compete for pole positions, for podiums and race wins is being, how do you say, shown it’s absurd because Racing Point is right up there, faster in some corners than we are and it’s a good challenge to see that,” he said.

“I have no doubt that Racing Point will be a hard nut to crack on some of the circuits for us as well. So, take the right decisions and deploy your resources where you think they are well deployed and I think you can have a quick car.”

“I am happy there is a process in place that will clarify those regulations and make it transparent for all stakeholders, what the FIA and FOM wish to happen in the future, and then we move on from that,” Wolff concluded.

But, ironically, Mercedes’ performance in qualifying that same day gave the lie to those comments. Lewis Hamilton’s pole lap was almost a second faster than the opposition, led by the Mercedes Approved Used Car of Lance Stroll. The gap over one of F1’s shortest laps was, in fact, the largest between a Mercedes and a ‘competitor’ in over 100 races despite the pink car’s ‘pedigree’.

This suggests that far from solving F1’s gap problem, ‘clone cars’ will not be able to challenge – even if permitted to do so in terms of hardware supply agreements – their suppliers (or source of inspiration, as the case may be), and that Ferrari and Red Bull simply underperformed in Hungary. Indeed, post-qualifying comments from both those teams bear that out and underscored by the ongoing dilemma Ferrari finds itself in.

Indeed, during the same media briefing, Wolff stated that his team’s superiority was at least in part down to engine development they had been forced into due to Ferrari’s power advantage prior to its downturn after a clarification was issued by the FIA last October and the subsequent secret settlement entered into between Maranello and Paris. At the time Wolff had led criticism of the deal.

“There’s a clear regulation on power units,” he said last weekend. “There have been clarifications in Austin, what is allowed to do or not, which were important, but nothing that was in any way surprising because if you comply to the regulations that was anyway clear,” he said.

“I think the irony of the story is that we were pushed by some of our competitors to absolutely new levels,” he added, clearly referencing his rivals in red. “It brought us to almost burnout last year, to develop and innovate in a way to be competitive on track. I think we made a substantial jump in performance from 2019 to 2020. Because we needed to last year, and that is a little bit ironic for me.”

Ultimately whatever binding verdict is handed down once all due legal processes have been followed will define the word ‘constructor’. At the core of F1 lies the Concorde Agreement, which outlines the obligations of all parties, including the sport’s revenue structures – which are (currently) distributed only to those teams who satisfy the definition of that key word.

Hence the philosophical question: Should teams that contract scores of photographers to snap gazillions of shots of the competition each weekend, then base their cloned cars entirely on such digital images, qualify for the same revenue shares as constructors who employ hundreds of engineers to originate their own designs? Why not simply rename F1 and get done with it? Aston Martin GP1 Team anyone?

59 comments on “Did the FIA really overlook Racing Point’s disputed brake ducts – and will it matter?”