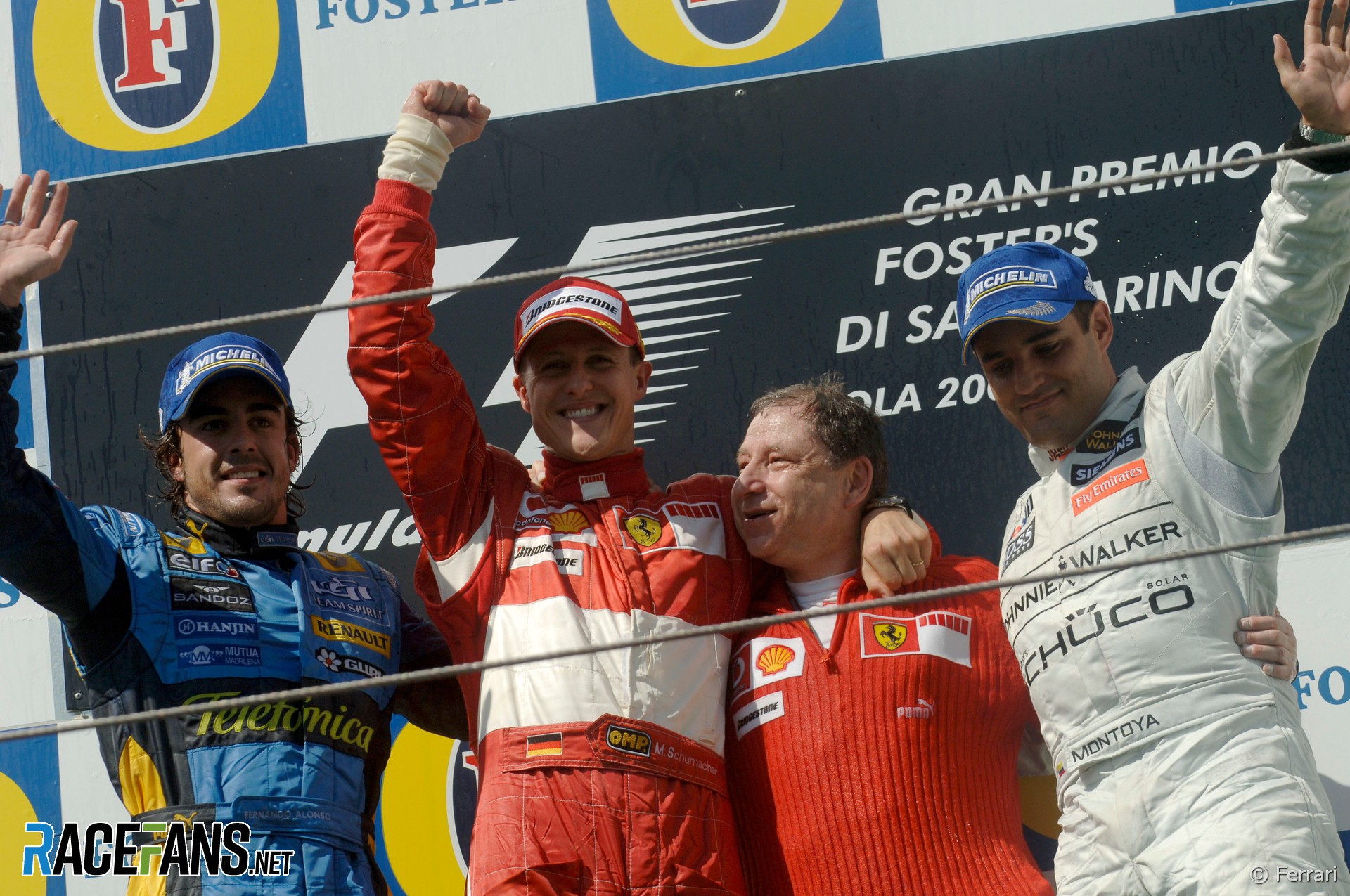 The Autodromo Enzo e Dino Ferrari circuit near the city of Imola in Italy has played host to the world championship on 27 occasions.

This was a fitting total, as it was the number Gilles Villeneuve famously bore on the nose of his scarlet Ferrari during that hotly disputed race at the track in 1982, when his team mate Didier Pironi was accused of defying team orders to win the race. Tragically, that proved Villeneuve’s final start.

He was killed less than two weeks later at Zolder in Belgium, trying to beat the pole position time set by his team ‘mate’ – now arch-rival. Villeneuve’s place at Ferrari and number was taken by Patrick Tambay, who sent the Tifosi into raptures with his victory at Imola the following year.

Both those races carried the title ‘San Marino Grand Prix’, as did every other visit by the world championship to the track after its inaugural race in 1980. On that occasion Imola hosted the Italian Grand Prix – the only time that race has been held outside Monza.

F1’s first race at Imola in 1980 was also the track’s only grand prix not held in the spring. That will change on November 1st, however, when it will hold the Emilia-Romagna Grand Prix.

Prompted by the disruptions caused by the Covid-19 pandemic, this will be the third race of the season to take place in Italy. It is only the second time in the history of the world championship that one country has held three races in a single season. This previously happened in 1982 when F1 visited the USA race at Long Beach, Detroit and Las Vegas.

But why has the title San Marino Grand Prix, a fixture on the calendar between 1981 and 2006, not been revived?

Firstly, it bears pointing out that the title is a misnomer. The tiny republic of San Marino, whose population of around 33,000 is less than half that of Imola’s, lies around 100 kilometres south-west of the city where the race is being held.

It does not take a cynical mind to see that naming its former race the San Marino Grand Prix was a dodge which enabled F1 to hold two races in Italy, maximising its income from the Ferrari faithful, while maintaining the appearance of not holding more than one race in a single country.

This is far from unprecedented in F1 history: At the height of Michael Schumacher’s popularity Germany also held a second round of the world championship, variously called the ‘European’ or even ‘Luxembourg’ grand prix as needed. It is no coincidence that 2006 saw the final year of that arrangement, the final San Marino Grand Prix – and Schumacher’s retirement from Ferrari.

F1 is not making three visits to Italy this year for the same reasons. Faced with the task of reorganising its calendar in the wake of the pandemic, F1 has had to strike most of its races which were scheduled for September, October and Novemeber.

These included Singapore’s street race, the long-haul trip to distant Suzuka in Japan, and three rounds in the Americas (plus the postponed Canadian Grand Prix) where the virus is surging at the moment. F1 needed to lay its hands on FIA grade one circuits ready to hold races, in regions where it the weather should make racing a possibility.

Italy can already offer Monza, Mugello was added to the circuit earlier, and now Imola has too. Its November 1st date will be by far the latest F1 has ever raced in Europe.

The race’s official title, ‘Gran Premio dell’Emilia Romagna’, has come about because of the support the local region has given to bringing Formula 1 back to the circuit for the first time in 14 years.

“Seeing Ferrari and the other cars racing on the Imola circuit will be a profound emotion,” said Stefano Bonaccini, president of the Emilia-Romagna Region. “Imola has always been a natural venue for Formula One and we have chosen to name the Grand Prix at Emilia-Romagna, in homage to our region, the land of motors par excellence.”

An opportunity to revive a name from F1’s past may have been overlooked, meaning Imola’s 28th grand prix will also have its third different title. Surprisingly, this won’t be a record for a single circuit.

The addition of Imola to the 2020 F1 calendar yesterday was announced along with a return to the Nurburgring. The German track has already held the ‘German’, ‘European’ and ‘Luxembourg’ events, so this year’s ‘Eifel Grand Prix’ will be the fourth different race it has held.