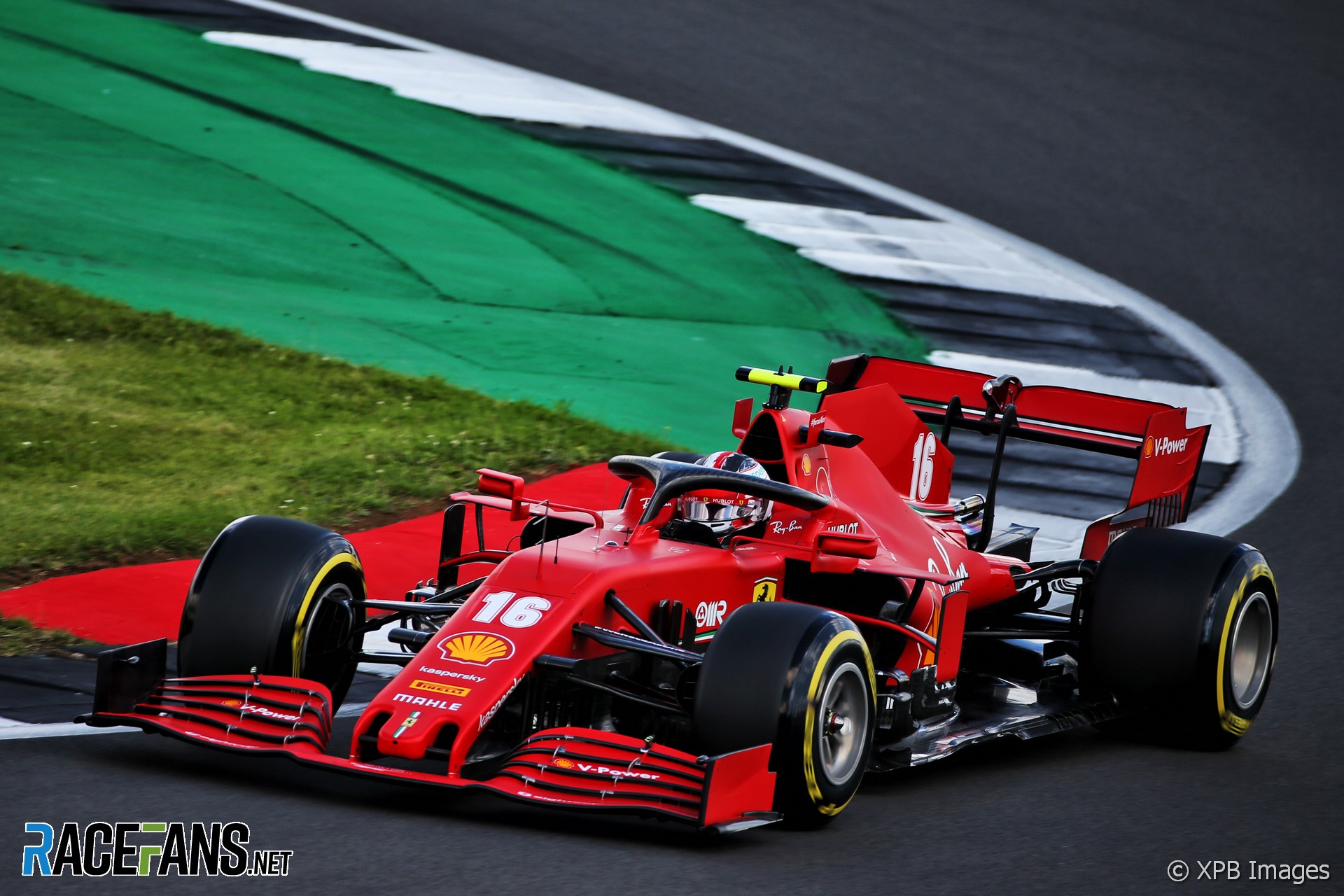 Ferrari trialled a low downforce set-up to try to reduce their straight-line speed weakness. Leclerc delivered a fine lap and took advantage of Racing Point’s unexpected dip in form to qualify fourth, beating Vettel by nearly a second. He laid the foundations for a solid race by qualifying on the medium compound tyre – an impressive feat his team mate also couldn’t match.

Leclerc made a solid start in the race. He temporarily passed Verstappen on the opening lap but the Red Bull driver regained the place. From then one Leclerc was largely untroubled from behind and inherited third when Bottas suffered his puncture.

Hamilton’s run of dominance around Silverstone appeared to be in jeopardy as he struggled with handling throughout practice and had a rare spin in Q2, bringing out the red flag. He recovered and set a new lap record three tenths ahead of Bottas for pole position and over a second clear of Verstappen.

He resisted Bottas at the start and managed his lead over his team mate throughout the race. He controlled both Safety Car restarts and was stretching his advantage when Bottas’s tyre failed. Hamilton backed off in order to make it to the end but his front left tyre failed as well with half a lap remaining. As Verstappen pitted on the penultimate lap Hamilton had a 30-second lead and skilfully nursed his three-wheeled car to the chequered flag.

Renault appear to be quicker in the race than they are over a single lap in qualifying and Ricciardo took advantage of that. After qualifying eighth, two tenths of a second ahead of his team mate, he passed Stroll and Norris on the first lap.

On the second restart, Ricciardo was passed by Norris, but with four laps to go the Renault driver regained the position. When Bottas and Sainz suffered their punctures he jumped to fourth, equalling his best result yet with Renault.

Qualifying 11th with an identical time to Lance Stroll’s Racing Point was a fine result. It allowed Gasly a free choice of tyres, but this advantage was erased by the early Safety Cars.

He fell back to 13th but made his way into the points. Over the final four laps of the race, Gasly passed Vettel and Stroll plus the tyre-troubled Bottas and Sainz to finish seventh.

Albon’s confidence took a hit in practice two when he lost the rear and slid into the barriers. For the second straight race weekend he was eliminated in Q2 and forced to play catch up in the race.

His hopes of rising quickly through the field took a blow when he made contact with Magnussen on lap one, putting the Haas driver out of the race. Albon was awarded a five-second penalty which he served during his pit stop on lap 30. He came out of the pits as the last running car and took advantage of fresher hard tyres to finish eighth, 28 seconds behind him team mate.

Vettel’s struggles were not helped by his car problems during practice, but nonetheless with was a disappointing performance by the four-times champion. He was well off Leclerc’s pace. Making matters worse, his best lap time in Q3 was deleted due to a track limits violation, which meant he started 10th instead of a potential fifth.

He never looked like recovering those lost places and ran out of the points for the majority of the race. Gasly eventually demoted Vettel to 11th but following the punctures, Vettel moved up to tenth and at least managed to resist Bottas in the final corners of the race to score a point.

Stroll struggled to find the race pace that Racing Point showed in the first three events of the season and he was out-qualified by both McLarens. He struggled even more in the race and slowly dropped through the order. Stroll was set to finish outside the points but after Sainz and Bottas retired he scored a couple of points in ninth.

Bottas was quicker than Hamilton in Q1 and Q2 but couldn’t continue his improvement and lost out in Q3. He stayed within a couple of seconds of Hamilton for the majority of the race and was set for a solid haul of points in second before a tyre failure dropped him outside the top ten.

Verstappen finished second but was agonisingly close to a win after Hamilton’s last-lap puncture. The lead Red Bull driver stopped for fresh soft tyres with two laps to go after Bottas’ puncture to go for the fastest lap point. He got it, but had he stayed out he might have won – assuming his tyres could have lasted until the end.

Norris out-qualified Sainz and the two McLaren drivers were locked in battle with Ricciardo for the majority of the race. Sainz was set to finish fifth before his tyre failed on the penultimate lap and he fell all the way to 13th; Norris collected the place his team mate lost and remarkably lies fourth in the drivers’ championship.

Ocon was slower than Ricciardo in qualifying and the race but benefitted from tyre failures ahead to finish sixth, adding to Renault’s solid haul of points, and his best result since his return.

George Russell initially made it out of Q1 but following qualifying he was handed a five-place grid penalty for failing to slow sufficiently under yellow flags – a significant error which left him last. The yellow flag was deployed in Q1 thanks to Nicholas Latifi’s spin during his final run.

Antonio Giovinazzi out-qualified Kimi Raikkonen for the third time so far this season but both drivers were out after Q1 and started 16th and 17th. He was still ahead of his team mate when Raikkonen’s front wing failed and he was forced to pit with four laps to go.

Magnussen started ahead of Grosjean and made a great start until he ran wide at Club and was knocked out of the race by Albon. Grosjean took a gamble during the second Safety Car and stayed out but it backfired and his race was ruined, finishing 16th, and made no friends with his borderline defensive moves on Sainz and Stroll.

Daniil Kvyat exited the race on lap 11 when his right rear tyre failed and he hit the barriers hard. After a positive Covid-19 test ruled Sergio Perez out of the weekend, his replacement Nico Hulkenberg was out before the race even started after a loose bolt kept his engine from starting.