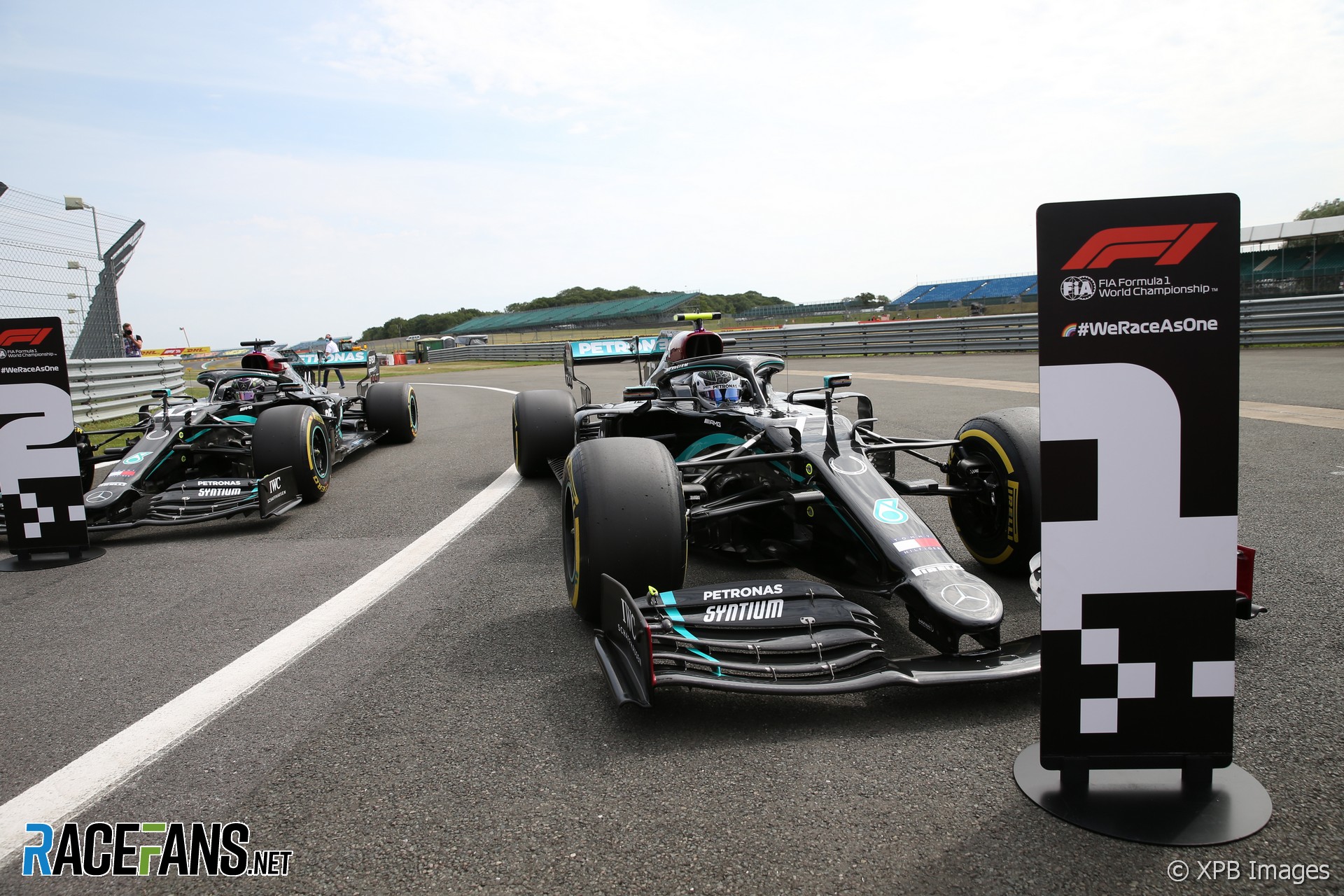 Valtteri Bottas took pole position from Lewis Hamilton with the final lap of qualifying, securing a front-row lock-out for Mercedes.

Racing Point’s substitute driver Nico Hulkenberg will line up behind them in third place. Max Verstappen will start alongside him and, thanks to his Q2 effort, will do so on a set of hard tyres.

Most drivers elected to run the soft tyres in Q1. The exceptions were the Haas pair and George Russell, who all selected the medium tyres to begin with. However as their rivals found they were able to coax more than one lap from the softs, the trio all joined them on the red-walled compounds.

Russell lost time being held up by Esteban Ocon, which the stewards announced they would investigate, but nonetheless jumped up to eighth place with his last run. Team mate Nicholas Latifi was six-tenths slower, ensuring his elimination.

Both Alfa Romeo drivers were unable to beat Latifi’s effort. Antonio Giovinazzi, despite scraping his car along the underside of a kerb, out-qualified Kimi Raikkonen again, leaving his world champion team mate last.

Daniil Kvyat wasn’t able to beat Russell’s time – he had a lap time deleted for exceeding the track limits, then headed for the pits reporting “something on the floor broke”. That proved crucial for Russell, as once Lance Stroll and Esteban Ocon jumped out of the bottom five with their last efforts, he grabbed the last place in Q2.

One place ahead of him was Sebastian Vettel, the Ferrari driver avoiding elimination in the first round by just two-tenths of a second. Kevin Magnussen was the other driver to drop out, while Romain Grosjean proceeded, quite a bit quicker than his team mate. “Romain got through, 27.5, about 0.7 quicker,” Magnussen was told. “Difficult car, you did what you could.”

As the second phase of qualifying began, all the drivers tried to make it through to Q3 on something other than the ultra-fragile soft tyre. For all bar two this meant the medium tyre; for Max Verstappen it meant the hard tyre, while Russell didn’t join the early runners.

Hamilton’s medium tyre lap wasn’t great, and Bottas comfortably led him after their first runs. Daniel Ricciardo used a set of mediums to go third ahead of Verstappen.

With the durable rubber in short supply for the race, spoiling a set with an off-track moment threatened to carry a high penalty. Nico Hulkenberg and Pierre Gasly did just that, however, getting greedy with the extended kerb at the exit of Becketts. Tellingly, both pressed on after those mistakes, and Gasly managed to bag 10th place.

Russell decided to chance a set of soft tyres at the end of Q2; he was in little danger of getting into Q3 and therefore being forced to start on them. Sure enough, he set a lap quick enough for 12th, despite a “weird” sensation from his gearbox.

For the final runs, Mercedes and Ferrari selected softs. This was a strange choice for Vettel, whose medium-tyre time had been six-tenths slower than his team mate’s, leaving him out of the top 10. The others, naturally, aborted their soft tyre runs to avoid improving their lap times and having to start on them. Vettel completed his – and failed to make the cut, dropping out in 12th. “It was all that I had,” he said, “all that there is in this car.”

Following his earlier error, Hulkenberg jumped up to second place between the two Mercedes. He was joined by Grosjean and Russell, whose team mates had already been left behind, plus Ocon and Sainz, who were out-qualified by their respective team mates.

“That was disappointing guys,” said Ocon. “Something we didn’t get there because the gap between the two cars is not normal. So let’s have a good look.”

Bravely, Verstappen did not join the final group of runners, and made it through by two-tenths of a second. That spared his tyres further unnecessary punishment, which could stand him in good stead on Sunday.

The tenth-of-a-second advantage Hamilton seemed to always have at hand over Bottas was in evidence once more after their first runs. Hamilton lowered the mark to a 1’25.284, though that was still almost a second slower than his pole position time from last week.

Behind the two W11s on soft tyres came Ricciardo on a set of mediums – albeit more than a second slower than Hamilton. Hulkenberg used softs to go fourth – despite getting too familiar with the Becketts kerb again – while Verstappen was only fifth on mediums. He called for softs for his final run: “This is not good at the beginning.”

He wasn’t the only driver who reckoned they would do better on a different set of rubber. The Mercedes drivers both began their final runs on mediums.

Through the first sector of the lap there was nothing to choose between them – their lap times were identical to a thousandth of a second. But at the line Bottas had six-hundredths of a second over Hamilton, securing a vital pole position after the blow he suffered a week ago.

Ricciardo slipped from third to fifth but was still pleased with his afternoon’s work. “We can still do something from there,” he told his team,” and by ‘something’ I mean ‘a lot'”. Verstappen improved to fourth at his expense, while Hulkenberg’s remarkable return to F1 continued with a third place which would have seemed completely improbably only a week and a half ago.