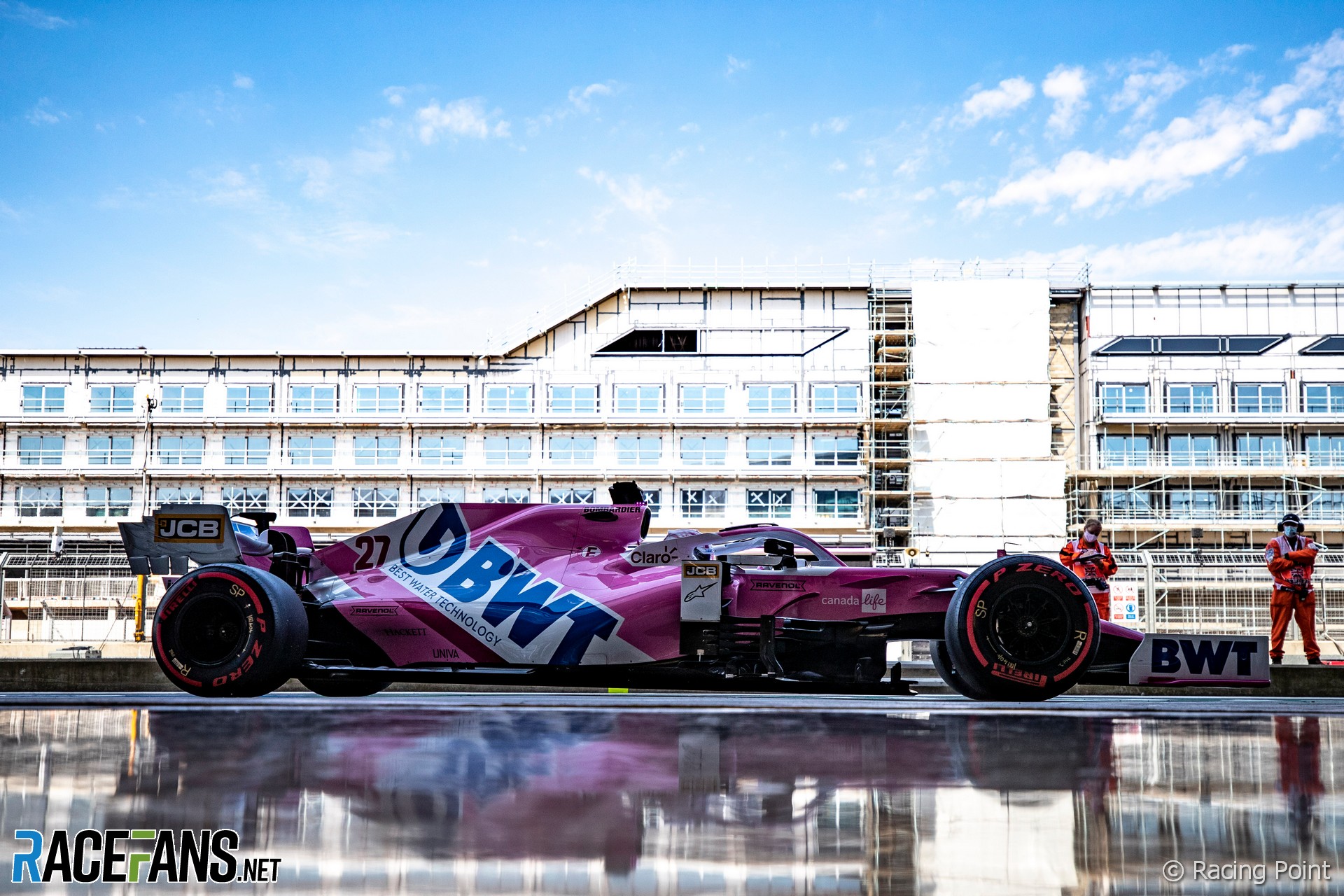 On Monday evening the trajectory of the Renault versus Racing Point ‘copying’ matter was unclear. The previous Friday the FIA stewards panel emphatically ruled against the latter, having upheld the protest of its French rival.

The stewards further found that ‘Tracing Point’, as the team is referred to by some in the paddock after admitting to having ‘reverse-engineered’ the Mercedes W10, had done so with a bit of help from friends in Brackley. Mercedes supplied CAD models and brake ducts to Racing Point for use in 2020 despite a switch in status for the parts from ‘unlisted’ to ‘listed’ parts.

The background to the saga was covered here when it first surfaced in March, and Friday’s verdict was subsequently analysed in-depth.

A €400,000 (£360,000) fine was handed down, together with a 15-point constructors championship deduction but, inexplicably to many, the offending brake rear ducts were declared permissible for future use. The verdict may have been correct, but the penalty surely too light. Appeals seemed likely, and so it proved.

Within the 24-hour time limit both teams lodged notice of intention to appeal, and Ferrari, McLaren and Williams also sided with Renault.

All weekend long Wolff publicly protested both team’s actions. One rival paraphrased William Shakespeare: “The man doth protest too much, methinks.” Asked a direct question by RaceFans about his team’s complicity, Wolff insisted “there is zero worry on our side. And when I say zero, I mean zero, that we were in any breach.”

That is not, though, what the stewards found: Article four of conclusion of the stewards states that with the (admitted) January 6th 2020 transfer of parts from Mercedes to Racing Point there had been a breach of the ‘listed parts’ regulations, but “not one worthy of censure… as the parts in question were not used”. That seems a bit like Racing Point being caught with a crib sheet, then arguing innocence on the basis that it wasn’t used.

Wolff and Racing Point CEO Otmar Szafnauer claimed the parts in question were “supplied in order to possibly fill a gap for testing” – yet the transfer date was over six weeks before testing commenced. Any wonder a number of team bosses have called upon the FIA to investigate the role of Mercedes in the matter?

Red Bull team principal Christian Horner queried how Racing Point could be found to have breached the rules, yet not Mercedes. “Regarding Mercedes I’m sure questions will get asked, because if the team in question are guilty of receiving, surely the team that has provided has been also in breach of those regulations? And that’s something for the FIA to look into.”

Guenther Steiner, his counterpart at Haas – which took (legal) parts sharing to a new level when it entered F1 in 2016 via a Ferrari supply deal – also requested clarification.

“First we have to see if [Mercedes committed any breaches]. Therefore at the court of appeal we’ll hopefully find that one out in a little bit more detail than the stewards did,” he said, adding that he was not surprised over Wolff’s responses.

That was the status quo as teams left Silverstone for Spain after one of the most contentious weekends in recent F1 history, one of much mud-slinging. This was not only in connection with the protest and verdict, but also over matters such as the incoming Concorde Agreement. (Incidentally, a target date of 31st August has been set for completion; all other dates mentioned recently were interim progress dates.)

Intriguingly, post-race on Sunday Wolff told Sky TV he had been invited – allegedly by both sides – to act as mediator in the Racing Point matter, a suggestion that raised guffaws among sources in the know.

“Yes, he was invited a meeting of teams to discuss the matter, but there was no talk of him as mediator,” said one, adding, “How could he mediate given his conflict?”

Another team boss suggested Wolff was “concerned that Mercedes’ role could be exposed if it goes on appeal, then he could be in real trouble with Ola [Källenius, Mercedes chairman and CEO].” Wolff insists he enjoys the support of Källenius. Whatever, any potential mediation was quickly overtaken by events.

No sooner was race weekend over than Lawrence Stroll went on the offensive, lobbying the sport’s movers and shakers. According to sources he called Luca de Meo, Renault’s new CEO – who has been in the hot seat for a little over a month and has little motorsport background to draw on – hoping to cut a deal. Stroll is also believed to have reached out to Ferrari’s top echelons and McLaren’s Bahraini owners.

However by Monday the matter had progressed far beyond a set of illegal rear brake ducts or a tranche of CAD models, or even a set of pattern parts sent from Brackley to Racing Point’s Silverstone factory. It now revolved around the question of reverse-engineering a complete car.

Unless that ceased, the four teams were determined to seek relief via the FIA International Court of Appeal, Stroll was told in no uncertain terms.

Then a collateral issue was raised: Loopholes in the chassis upgrade token system introduced for 2021, which allow Racing Point to upgrade the rear end of its 2020 car (effectively a 2019 Mercedes) to later specifications on a token-free basis.

McLaren, which struck a deal to switch engine suppliers before Covid-19 hit the world, will be hit by a spend of two tokens to install the same unit as Racing Point. Ferrari and Renault, too, are unhappy.

Thus the message from various quarters was clear: The system needs revision, after which teams may withdraw their appeals provided Racing Point accepts a guilty verdict, and then only if the FIA carries out its intention to outlaw copying as outlined by the governing body’s head of single seater racing, Nikolas Tombazis, and followed up by letter to all teams from FIA Secretary-General Peter Bayer on Tuesday.

In the letter, the contents of which were confirmed to RaceFans by various team sources, Bayer outlined broad plans to amend Article 22.3 (Listed Team Components) of the 2021 Technical Regulations to prevent copying by some form of photography and/or so-called ‘reverse engineering’. Indeed, from the letter it is clear the FIA believes that copying on an industrial scale should be outlawed.

However, the FIA is mindful that – due to cost savings required by the effects of Covid-19 on F1 – introduction of ‘new era’ cars is delayed until 2022, with current cars carried over for a year with minor upgrades (hence the token system). Equally, the FIA is reluctant to amend the token system due to concerns that teams have commenced development. Even so, that is unlikely to be the end of the matter…

With the 2021-25 Concorde Agreement due to be signed imminently, the revised governance process as originally revealed here by RaceFans comes into play. Under the structure the FIA and F1 have 10 votes each, with each team holding a single vote and timing of motions being as follows:

However, with carry-over rules mandating evolved 2020 cars it is unlikely any immediate changes to Article 22.3 will have much effect on so-called ‘copy cars’ in the medium term. Still, it is easy to sense where this is headed: the four then-appellants (now two) sensed bargaining chips in their quests to amend the token system and protect the integrity of (full) constructor teams.

As any such votes for 2021 would fall between within the ‘super-majority’ category. Assuming the FIA and F1 vote as a block in favour of change they would need to be joined by eight of 10 teams to approve the change. Given that only Mercedes and Racing Point favour ‘engineering by photocopier’ route, they would be outvoted by the remaining eight. Voila, the required super majority wins the token battle if not (yet) the total war.

Another area of concern is engine modes, which is rather more complex: the FIA intends to clamp down on the practise of different modes for outright speed in qualifying and race pace, an area in. which Mercedes excels. As expected, the four Mercedes-powered teams – the current three comprising the main team, Racing Point and Williams, plus McLaren from 2021 – are obviously against such a move.

However, to McLaren and Williams the integrity of the constructor model is more important overall than advantageous single lap performance, and they can be expected to vote in favour of the overall package: tokens, bans on ‘copy cars’ and on engine modes.

It may not come to that, for the new governance process pertaining to power unit regulation changes calls for a super-majority votes plus two votes from the four power unit suppliers. Therefore, any permutation of two votes in favour from Ferrari, Honda and Renault will do the trick

When these factors were tabled during a series of meetings and calls held on Monday and Tuesday, the temperature changed totally, with only Ferrari and Renault confirming their appeals by deadline. McLaren and Williams issued statements confirming their withdrawals, with both making references to the FIA initiatives.

“McLaren Racing is pleased that the FIA will further clarify the sporting and technical regulations to protect Formula 1 as a sport where teams are clearly defined as constructors, and removes the potential that the Formula 1 world championship includes cars that are, in effect, copies of other competitors,” read Woking team’s statement.

Williams expressed similar sentiments: “After careful consideration, Williams have elected not to proceed with the formal appeal. We believe the FIA’s decision to seek the prohibition of extensive car copying for 2021 onwards addresses our most fundamental concern and reasserts the role and responsibility of a constructor within the sport, which is fundamental to Formula 1’s DNA and Williams core beliefs and principles.”

An FIA spokesperson confirmed to RaceFans that an appeal had been received from Racing Point.

What are the chances of the appeal process going ahead? That, frankly, depends upon Racing Point and partner Mercedes: Acknowledging guilt as handed down by the stewards would be a first step in the right direction. Then both teams would need to accept proposals to change the Technical Regulations in order to outlaw ‘copy cars’ and overhaul of the token system to remove inequitable advantages.

Although changes to the power unit regulations could be effected without Mercedes, any form of agreement would raise the team’s stock in the paddock. It goes without saying that the arrogance associated with Mercedes has not endeared the team in the paddock, at whatever levels. Some humility and apologies for referencing rival team bosses as being “up the arse” of Liberty would go a long way.

In the final analysis this was never about rear brake ducts fitted to a ‘pink Mercedes’, but a vicious battle between purists and arrivistes for the technical soul of F1; over F1’s status as the premier constructor series. Ironically the battle climaxed on the eve of the sport’s 70th anniversary event. Perhaps that will prove fitting, paving the way for F1 to once again embrace the original intention behind the constructors championship, first introduced during the 1950s.

23 comments on “Will the Racing Point row go all the way to the appeal court?”